Fat donald can’t quit it. He finally turned on Coulter because she turned on him. Always remember, you are only a friend of fat Donald’s, and spared from his name-calling, as long as you worship at his altar. He would trhow his own mother under the bus if he had to.

Has anyone told him he needs to build up his base to get a 2nd term, rather than alienate everyone?

That was only a matter of time.

Probably figures he won with nothing but his base last time, that’s all he has to appeal to this time.

Makes no sense of course, but then neither does Donald.

I wish this rift would have happened before she taunted him to shutting down the government for the longest government shutdown. 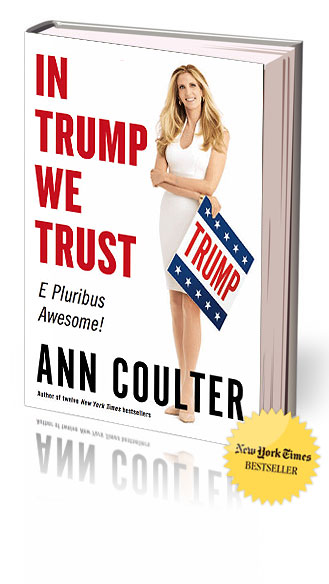 Careful. This could all be scripted for both their benefits. Yes, he’s that smart… or so he says.

He has the best thoughts. He plays eleventh dimensiony chess from what I’ve heard.

It’ll be at the Dollar Tree soon.

If I were Ann I would be happy about the potential controversy. It all means that he is paying attention to what she writes. I would much rather incur his temporary wrath than be ignored by Hillary and Bill.

Trump wants Ann to chant " Finish the Wall" like everyone else. If you don’t it’s like invasion of the body snatchers and they turn on you.

Dumpster Donnie will chuck ANYONE out the window and roll over them with his silver limo the second they don’t kiss his pasty ass. In the most juvenile way possible.

Those two need to just get a room.

True. It could simply be a case of two idiots who are starting to slip in relevance agreeing to create a media frenzy.

The rubes love it. Constant drama fuels their devotion to morons like Trump and Coulter.

A birther calling someone else a whack job

I see Ann Coulter is new hero of the left.

I wouldn’t say that. I think as an outsider looking in, that it looks like the neighbors are having a fight and it can be heard across the street.

I see Ann Coulter is new hero of the left.

I think one could safely say she probably wouldn’t accept that unless it would help her sell a few thousand books.

I think as an outsider looking in, that it looks like the neighbors are having a fight and it can be heard across the street.

It would make for an awesome MMA grudge match. I can hear the ads now:

“COULTER! TRUMP! NO HOLDS BARRED! $80 BUYS YOU THE WHOLE SEAT, BUT YOU’RE ONLY GOING TO NEED THE EDGE!!! IF YOU’RE NOT THERE YOU BETTER BE DEAD OR IN JAIL - AND IF YOU’RE IN JAIL, BRRRRRRREAK OUT!!!”