Trump bragged that he has a plan to win the war in Afghanistan but thankfully for them he doesn’t wanna be a mass murder.

Ahead of a Monday meeting with Pakistani Prime Minister Imran Khan, Trump told reporters at the White House that he could win the war in Afghanistan in just one week if he really, really wanted to. But Trump says he won’t do that because he doesn’t want millions to die.

“I don’t want to kill 10 million people,” he said. “I have plans on Afghanistan that if I wanted to win that war, Afghanistan would be wiped off the face of the earth, it would be gone, it would be over in literally 10 days.” 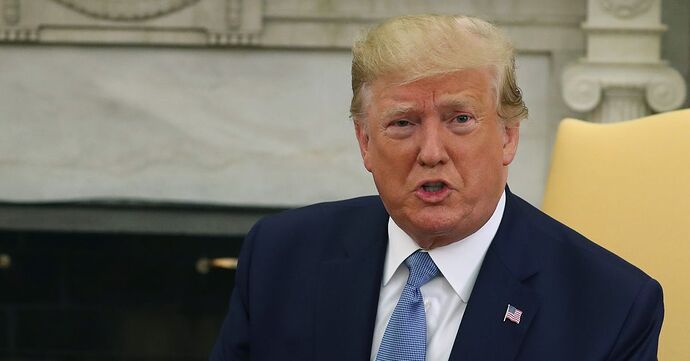 Trump said he doesn’t want millions to die, but mused about wiping out Afghanistan, a country we are supposedly trying to help.

America has been at war in Afghanistan for 17 years.

Let me guess… his plan rhymes with boomclear froms.

What kind of person sits around thinking about wiping entire countries off the face of the earth? Even if he ultimately decides he “doesn’t want to do it…”

The President of the United States - that’s who.

I swear, I don’t recognize my country any more.

He is an embarrassment.

Why am I not surprised that libs aren’t even for winning the war in Afghanistan? If Donald Trump can win the war in 10 days then he should do so!

He could tens of millions but he won’t because he is such a great person. A true example to which we should all aspire.

yup i am totally sure members of the military would totally accept the order the mass murder of a third of the country.

He really talks too much.

I forget the last terrible thing he’s “not” going to do but talked about. I think it was shoot people at the border when someone in the crowd said we should. I know one was when he was joking about putin killing journalists saying he’s not going to kill any journalists. These are always " why are you bringing it up like it was even an option?" things.

Just some of his great ideas

What a sweetie! He’s just so pro-life.

“I have plans on Afghanistan”

Anyone here speak Trump and can translate?

Turn it into glass.

Turn it into glass.

Not very talented, the worst words.

He should keep his horseface shut, people are saying very terrible things about him.

But I don’t know anything about that.

Gotta wait till his re-election can’t spill the secrets.

He is an embarrassment.

Gotta wait till his re-election can’t spill the secrets.

He’s got a team in Kabul right now, they are finding some amazing things.

Yes which is funny because he said this when speaking to the PM of Pakistan who is the largest backer of the Taliban in the region.