TOTAL DENIAL: Pelosi and Schumer Accuse Trump of ‘Manufacturing Crisis’ at the Border

Schumer and Pelosi addressed the nation just minutes after President Trump spoke from the Oval Office, where he demanded Democrats get serious about border security and immigration.

“Most presidents have used Oval Office addresses for noble purposes,” said Schumer. “This president just used the backdrop of the Oval Office to manufacture a crisis, stoke fear, and divert attention from the turmoil in his administration.”

The left-wing lawmakers’ comments come on the heels of a report that showed over 27,000 migrants were detained by federal agents in December alone, and more than 60,000 in the previous three months.

If there was such a disaster, why didn’t Paul Ryan fix it while he was Speaker?

What schmucks they are. Lying pieces of (fill in the blank)! 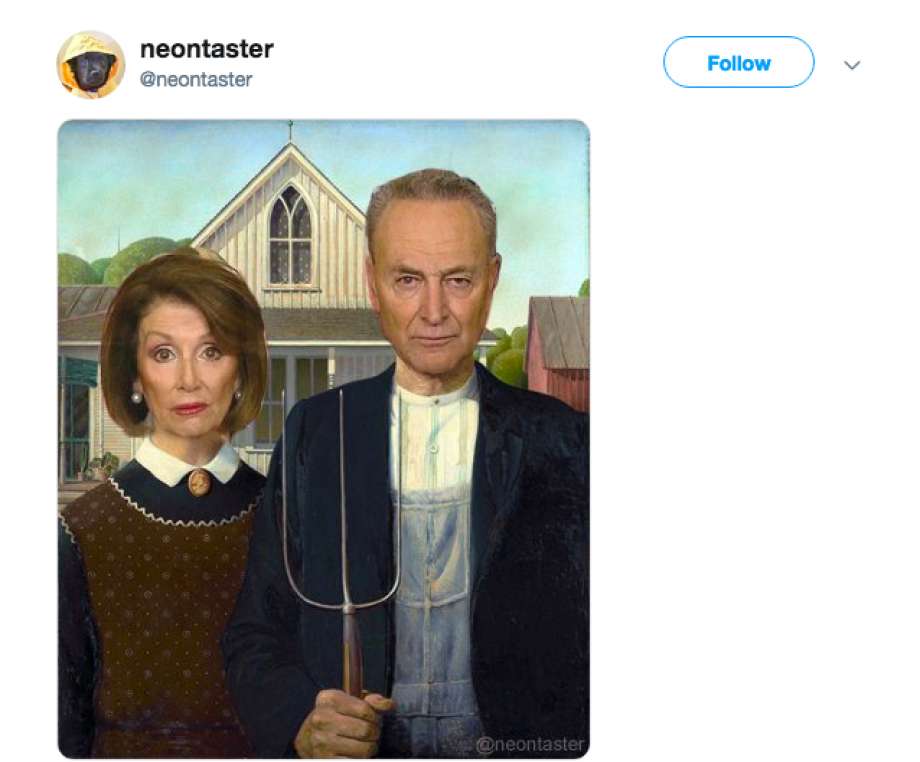 1.) Because Democrats blocked them at every turn
2.) The crisis has gotten far worse since the Democrats took power

The cons win the meme war

1.) Because Democrats blocked them at every turn
2.) The crisis has gotten far worse since the Democrats took power

The cons win the meme war

At least they got something. The meme war and the blame for 5he Trump Shutdown. What they haven’t got is the wall.

How is two Democratic leaders from the coasts being pictured as heartland Americans a “victory” for Republicans. Yesterday Pelosi and Schumer were coastal elitists. Now they being shown as firmly planted in flyover country.

This isn’t winning; this is awarding participation trophies.

Eh… it’s a weak meme at best, the whole night was weak.