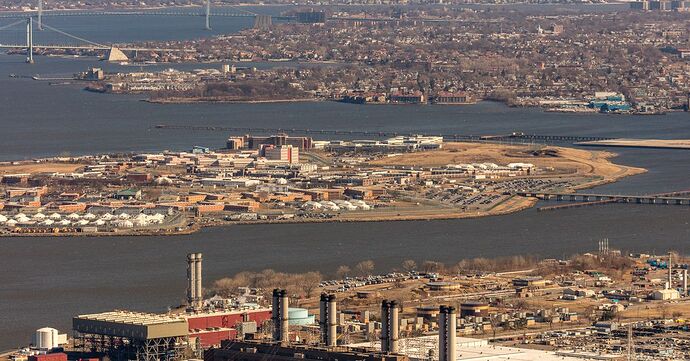 The effort to replace Rikers is at a critical juncture, here’s what you need to know.

I ran across this by chance and I am glad to see New York City is finally moving to close the truly nightmarish facilities at Rikers Island and replace them with 4 high rise jails, one for each of the large boroughs (Staten Island’s prisoners would go to the Brooklyn facility). The new jails would be near the existing courthouses in each borough.

If they get moving on schedule, Rikers Island could be closed for good by 2026.

It is notable that the United States Bureau of Prisons refused to hand Paul Manafort over to New York jail officials, because he would have been placed in Rikers. Instead, Manafort is being held at the United States Metropolitan Correctional Center in Manhattan until and during his state trial, after which he will be transferred back to his previous federal facility.

When your jails are so ******* barbaric that the Federal Government (which once ran Alcatraz Island) refuses to grant custody of their prisoners to you, you know you jails are ****** up beyond all hope of repair.

I am glad to see this development and will celebrate the day Rikers Island closes for good.

Barr removes prisons chief after Epstein death....What is it about this case that has so much of Barrs attention?
LucyLou July 13, 2019, 3:15am #2

Thanks for that article. Fascinating reading.

Thanks for that article. Fascinating reading.

There has been lots of pressure to close Rikers for years, but finally the wheels are moving.

I deposed someone at rikers once. Holy crap.

I find every thing about NYC infrastructure fascinating.

The fact that it’s on that island, and why that in itself is a problem, is addressed in the linked article.

The prisons in NYC… city, state and federal are an abomination to a just society.

That’s exactly what I was thinking as well. A personnel/management issue. Simply closing it down isn’t solving that problem.

The fact that it’s on that island, and why that in itself is a problem, is addressed in the linked article.

Yeah but that’s a different set of problems.

I’m sure the potential value of this new real estate has nothing to do with this entire situation.

I’m sure the potential value of this new real estate has nothing to do with this entire situation.

It is NOT as valuable as you might think. Much of Riker’s Island was built with contaminated fill. It would require a great deal of cleanup before it would be suitable for commercial or residential use.

They will just level it and then plant trees, turn it into a park type setting.

Breaking the population up into four new facilities will help in and of itself. New high rise facilities, where prisoners can be segregated by a number of factors will allow non-violent, non-sexual offenders to be separated and protected from violent and sexual offenders.

The new facilities will be right next to the court houses, easing the burden of defense attorneys and allowing them to more efficiently represent their clients. Additionally, being right next door, the courts will be able to ride herd on the prisons, making sure safety standards are being upheld.