The first stage in the battle for Venezuela

the first stage in the battle for the country was fought today as international aid passes the closed borders as soldiers defect. can the government keep support of the Army?

An aid convoy entered Venezuela on Saturday from Brazil, as aid from Colombia is held up at the border.

Also Saturday, three members of the Venezuelan national guard drove a jeep into barricades at a border crossing with Colombia, saying they wanted sanctuary in the country.

The first truck loaded with humanitarian aid from the Brazilian government arrived in the border city of Pacaraima, on Saturday, ahead of its entry into Venezuela from Brazil.

The crossing has been closed on orders from the embattled Venezuelan President Nicolas Maduro since Thursday night. He has refused to accept the food and medical supplies, saying it’s part of a larger plot to unseat him from power.

The three troops from Venezuela defected from neighbouring Colombia at the Simon Bolivar bridge, which is also closed to awaiting aid shipments from the United States. 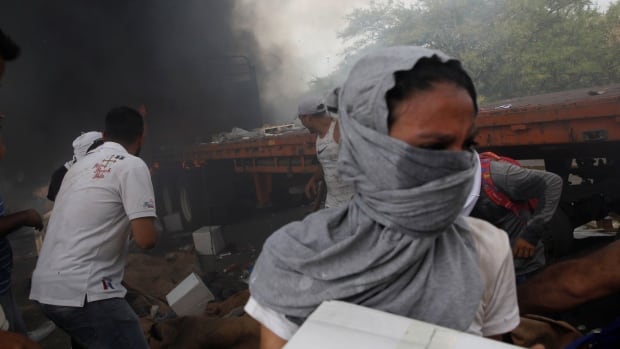 Venezuelans scramble for aid amid deadly clashes with military at border |...

Opponents of Venezuela President Nicolas Maduro braved tear gas as they rescued boxes of emergency food and medicine from burning trucks during violent clashes on the Colombian border with security forces blocking the entry of U.S.-supplied...

How the Iraq War happened is a real mystery.

What did the U.N. say about the “aide” supply from the U.S. again?

Nothing quite like placing sanctions on a country and then sending “aide” to them.

I know I’m basically talking to myself at this point, but it is funny that the Brazilian and Colombian governments are being used to enhance the credibility of our nonsense. Yeah, you got yourselves some real winners there.

They both currently have a Venezuelan refugee problem. It’s very bad in Colombia and it doesn’t do to piss them off.

Colombia. The sun source of all that is right and good with the female of the species.

Columbia. A den of liberalism somewhere in New York.

Yeah that’s what I’m hearing from family member. One of my niece mother came back from Colombia couple months ago.

Brazil from my understanding has more refugee.

So apparently you support the murderious Maduro. It ain’t just a few Latin American countries, it is the majority of Latin American countries besides the tyrant in Cuba, Mexico, the majority of Europe besides Russia, and Iran, and China, they are the ones backing the murderous Maduro. Maduro has repressed and murdered people, with its socialism, a once prosperous middle class, has people eating their pets, cats and dogs, no toilet paper, no medicine, this has developed over years, it ain’t the US causing this. The US has been cautious, but supporting the change, and can be seen by the numerous demonstrations, they want this thug out of there.

How the Iraq War happened is a real mystery.

Nothing quite like placing sanctions on a country and then sending “aide” to them.

I know I’m basically talking to myself at this point

But there is money to be made. These things pay for themselves.

Even when I want to agree with you, somehow, you manage to be completely wrong.

To be fair, this dog came a waggin at the right time.

I’d bet my truck that if a reporter asked John Bolton or Trump tomorrow if we would launch a nuclear first strike at Venezuela they’d say “All options are on the table.”

So apparently you support the murderious Maduro

So just so we’re clear this is you attaching your entire support behind Guaidó? We can mark you down as a 100% and check back later right? Obviously you’ve done your due diligence and researched him and you’re willing to put your name down as a backer, and if need be you’ve concluded that you’re willing to sacrifice the blood of your sons and daughters along with your nation’s treasure to support this man? You’ll confirm that for us now?

Not going to happen…watch and learn.

Not sure about his expertise but I do find his article interesting. 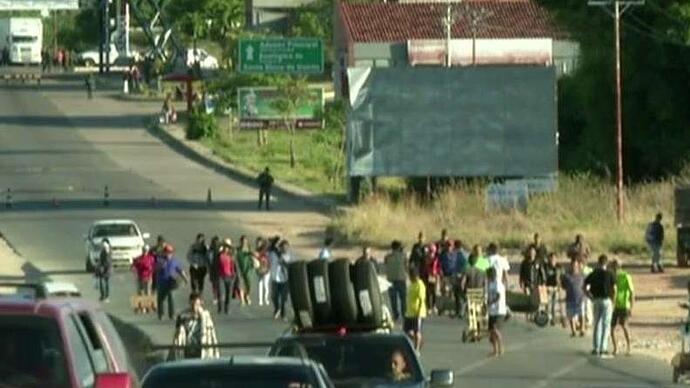 Andy Puzder: As Venezuela is devastated by Maduro, Trump is forcefully...

With his stirring repudiation of socialism, both at home and abroad, President Trump is proving himself to be the very champion of liberty and freedom the world needs.

Not sure about his expertise but I do find his article interesting.

With his stirring repudiation of socialism, both at home and abroad, President Trump is proving himself to be the very champion of liberty and freedom the world needs.

Wooof. Now that my heart is “stirring” with freedom juice let me observe the rest of this man’s public act of butt polishing…

oh my gawd…the next sentence. Which of course, this author decided was such a good sentence he let it stand as its own paragraph:

While previous U.S. leaders have opposed totalitarian regimes, no American president since Ronald Reagan has confronted the evils of socialism as forcefully as Trump is doing today by supporting the people of Venezuela as they retake their country from the corrupt socialist dictatorship of disputed president Nicolas Maduro.

Someone should tell yaboi Puzder about the Bush funded coup attempts againd Chavez. For cripes sakes Puz, this ■■■■ can be found on wikipedia…

Lord. The 3rd sentence. We could be here all night with this gem:

President Trump deserves more credit than he is getting for taking this stance against an economic system that throughout its history has created nothing but poverty, despair and want – all managed by totalitarian elites.

Who isn’t giving him credit? Have all the credit. Take it. Venezuela is officially Trumpezuela from now on. Own it.

“Now is the time for all Venezuelan Patriots to act together, as one united people,” he continued. “Nothing could be better for the future of Venezuela!”