The false notion that all or most of these migrants will benefit us economically. Related question, what must one pay in taxes to support themselves and their family?

yes, The real problem is that they compete with legal labor. They make wages lower. Dems pretend to be the party of the working man while rents skyrocket and jobs are taken by illegals…

I’m not going to go search for it, but I’ve seen a report that states it is the young black man who is mostly damaged by the illegals…taking their jobs.

How bout the clown show growing illegal aliens? Is that good for low income US citizens and legal immigrants?

Illegal immigrant unskilled labor floods the market for entry level positions. This restricts the number of positions available for our HS kids looking for that first job.

And other low income Americans.

Most certainly, and this effects how much economic output from these jobs contributes to the US economy. A low income American or a US teenager looking for that first job, will spend 100% of their wages in the US economy. Someone in the thread pointed out that it is mostly young men where they are sending part of the money back to their country of origin. That “some of their money” amounts to billions of dollars a year not spent in our economy.

And where you have families, citizen or immigrant, receiving welfare there is a false GDP contribution generated. Welfare payments, counted as government spending, do not actually represent the production of a good or service. Production of a good or service involves an exchange which determines the value of that good or service. Welfare payments are a redistribution not involving an exchange. Counting them in GDP falsely inflates GDP. And in the case of an illegal immigrant accessing these funds for citizen children, it falsely inflates their contribution to GDP.

So I worked out some numbers for a typical American at NJ rates and if I were to factor in free childcare along with the existing K to 12 costs + 4 years of college + 85 years of healthcare + social security one could easily get to 2 million dollars per individual. That would mean that total taxes paid per year (assuming 40 years of work) would be on average about $50,000.

A goodly number of illegals pay very little in taxes by working under the table.

Under cuts the prevailing wages by working even under minimum wage level as well.

The idea most illegals will benefit us is lib BS imo.

It’s actually simple math. Take a person with a salary of $100,000. At a 30% tax rate that would be $30,000/year that individual would pay in taxes. Nobody coming across that border with little to no education, marketable skills, and doesn’t speak English is going to make anywhere near $100,000 for one. Secondly, like you said many would work under the table and hence avoid taxes. Finally, they have children at a greater rate than the typical American, which I noted becomes an economic burden born almost entirely on US taxpayers.

Flooding the nation with poverty will lead to prosperity!

“We must destroy ourselves to help ourselves comrade! Ask not why or how! Simply do!! For the victory of socialist labor!!!”

Where is the evidence the migrants from Central America won’t be of benefit? A TV was delivered to our home at 7:00 this morning by two delivery men I would definitely say had indigenous heritage and clearly spoke with Spanish accents.

They’re making deliveries and some native borns are focused on mental retardation like “staying safe”. Jobs are going unfilled. 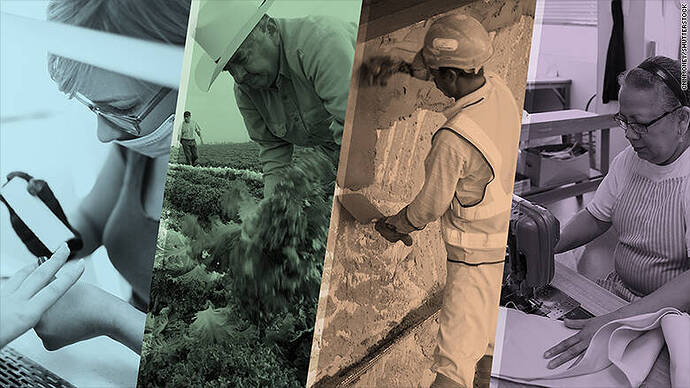 Immigrant workers are most likely to have these jobs

While there isn't any one industry where immigrants make up the majority of workers, there are some jobs where foreign born workers dominate, a new report from Pew Research finds.

As a group politically, Hispanic folk already in the U S may be shifting right. They’re not sticking their noses in others’ business re vaccination and they don’t appreciate being penalized by lockdowns.

I’d rather partake in their ideas of getting to work & life going on than those of the brain dead wanting to extend the lives of elderly while restricting and eliminating others’ lives.

Immigrants sending money to families at home and even returning there is nothing new.

Are native borns in line to do deleading jobs? Mold and asbestos abatement?

And the money sent to another country still isn’t helping our economy.

It’s why those who have endured the legal immigration process speak out against those who literally cut in line and made a mockery of their endeavor to be an American citizen the right way.

That’s not what the OP is about.