My proposal is fully Constitutional and would all but extinguish the current issues with Supreme Court appointments.

What my proposal does NOT do is “fix” the current composition of the Supreme Court. They are there (including the one to be appointed by Biden) and will serve as normal. Republicans could expect to control the Supreme Court for at least another decade.

My proposal is simple.

This bill has the further benefit of removing the unseemly and downright ghoulish pressure on Justices to retire or the glee on either side if a hostile Justice dies suddenly. A Justice will be free to serve as long as he likes without political pressure to leave the court. A Justice could retire during the Presidency of a hostile President, knowing he is not handing a political plum to that President. And he is relieved of the burden of wondering if he will make it through a Presidential term alive, as his death will not create a vacancy.

This proposal is absolutely Constitutional. Alternate proposals to limit terms are unconstitutional and would likely be quickly struck down as such.

As a comparison, number of Justices appointed in the 28 year period ending with Biden’s inauguration, January 20th, 1993 to January 20th, 2021:

9 total during the 28 year period.

Had this legislation existed:

7 appointments during the 28 year period.

Win the Presidency, win 1 seat on the Supreme Court. Can’t get more equitable than that.

The very opposite of Court Packing.

Also, the expected reduction in Justices over time, from 9 to an average of 7, will considerably increase collegiality and efficiency on the Supreme Court.

The Supreme Court shall hold at the seat of government a term of court commencing on the first Monday in October of each year and may hold such adjourned or special terms as may be necessary.

Whenever the Chief Justice is unable to perform the duties of his office or the office is vacant, his powers and duties shall devolve upon the associate justice next in precedence who is able to act, until such disability is removed or another Chief Justice is appointed and duly qualified.

The Chief Justice and each associate justice shall each receive a salary at annual rates determined under section 225 of the Federal Salary Act of 1967 (2 U.S.C. 351–361), as adjusted by section 461 of this title.

§6. Records of former court of appeals

I would change it to read:

The Supreme Court of the United States shall consist of an indeterminate number of Justices, any two-thirds of whom shall constitute a quorum.

Section 2 would remain the same.

§3. Vacancies on the Supreme Court

The death, resignation, retirement or retirement in senior status of a Justice shall not create a vacancy on the court. One vacancy in the office of Justice shall be created at noon Eastern Standard Time on the 20th day of January next succeeding each Presidential election year. However, if the President shall fail to successfully appoint an individual to a vacancy created under this section during the respective term of office, such vacancy shall expire at 11:59:59 am, Eastern Standard Time on the 20th day of January marking the end of such term of office and shall not carry over to the next Presidential term.

§4. Precedence of justices, rotation of service as Chief Justice

I would omit Section 6 as being obsolete. 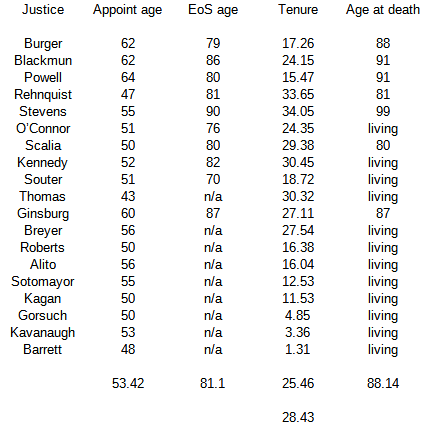 The thing to take away from the image above is that the average service of the 6 Justices who took office under age 60 and have ended service is 28.43.

The average service for all 10 Justices appointed in the modern era who have ended service is 25.46 years.

Meaning that with 7 Justices appointed over 28 years, each expected to service an average in the above ballpark, you can expect the Supreme Court to stay relatively close to 7 Justices most of the time.

I think we can make the SCOTUS less political by changing the lifetime tenure provision. If Justices were required to rotate out of the court, then there is less possibility of a justice “hanging on” until they get the Presidential/Senate combination they feel more aligned with for political reasons. If vacancies were to occur on a more regular basis it would be a more routine process.

I’m not so much in favor of an upper age limit though as it will then become the ploy to just nominate younger and younger individuals to be on the SCOTUS so they can be there longer. I’m more in favor of limiting the number of years of SCOTUS service.

Amend the US Constitution concerning SCOTUS tenure. Then…

BTW - I actually like Safiels notation that the Chief Justice isn’t appointed, is just - well - the senior Justice on the court.

So if that ever happened my suggestion would have to be modified.

Amend the US Constitution concerning SCOTUS tenure. Then…

Unfortunately, that is the problem with your proposal.

A chance of any Constitutional Amendment passing is close to zero.

One of the upsides of my proposal is that it can be done entirely legislatively.

Justices are appointed and confirmed by the political branches. You will never be able to regulate the political nature of the appointment out of the court.

Justices are appointed and confirmed by the political branches. You will never be able to regulate the political nature of the appointment out of the court.

I agree with that statement. My legislation obviously can’t do that.

What it can do and what it would do if enacted, would be to regulate the process such as to introduce political CERTAINTY into the process.

Politicians and the public would be certain that, come the start of each new Presidential term, would come a new Supreme Court vacancy, to be filled by the President just elected and who has just taken office.

There would be no wondering if so an so is going to die near the end of a Presidential term or die during a recalcitrant Senate.

Both politicians and the public would know EXACTLY when vacancies would open and it would always be a freshly elected President, with freshly elected Senators, who would decide the issue.

Of course, there would be politics, but there would not be the clown show that has existed in recent years.