The Supreme Court just cancelled the April sitting. It has NOT definitively indicated how it will proceed, however it did hint that some cases could be postponed to the October 2020 Term.

Some of these cases are time sensitive and there are a couple of options for proceeding.

Now some cases, such as the Trump cases and the Presidential elector cases, are time sensitive.

Issue(s): Whether the U.S. Court of Appeals for the 8th Circuit erred in holding that Arkansas’ statute regulating pharmacy benefit managers’ drug-reimbursement rates, which is similar to laws enacted by a substantial majority of states, is pre-empted by the Employee Retirement Income Security Act of 1974, in contravention of the Supreme Court’s precedent that ERISA does not pre-empt rate regulation.

Issue(s): Whether the prosecution of an enrolled member of the Creek Tribe for crimes committed within the historical Creek boundaries is subject to exclusive federal jurisdiction.

Issue(s): Whether an entity that is passively retaining possession of property in which a bankruptcy estate has an interest has an affirmative obligation under the Bankruptcy Code’s automatic stay, 11 U.S.C § 362, to return that property to the debtor or trustee immediately upon the filing of the bankruptcy petition.

Little Sisters of the Poor Saints Peter and Paul Home v. Pennsylvania, No. 19-431

Issue(s): (1) Whether a litigant who is directly protected by an administrative rule and has been allowed to intervene to defend it lacks standing to appeal a decision invalidating the rule if the litigant is also protected by an injunction from a different court; and (2) whether the federal government lawfully exempted religious objectors from the regulatory requirement to provide health plans that include contraceptive coverage.

Issue(s): (1) Whether the Departments of Health and Human Services, Labor and the Treasury had statutory authority under the Patient Protection and Affordable Care Act and the Religious Freedom Restoration Act of 1993 to expand the conscience exemption to the contraceptive-coverage mandate; (2) whether the agencies’ decision to forgo notice and opportunity for public comment before issuing the interim final rules rendered the final rules – which were issued after notice and comment – invalid under the Administrative Procedure Act; and (3) whether the U.S. Court of Appeals for the 3rd Circuit erred in affirming a nationwide preliminary injunction barring implementation of the final rules.

Issue(s): Whether enforcement of a Washington state law that threatens a fine for presidential electors who vote contrary to how the law directs is unconstitutional because a state has no power to legally enforce how a presidential elector casts his or her ballot and a state penalizing an elector for exercising his or her constitutional discretion to vote violates the First Amendment.

Issue(s): (1) Whether a presidential elector who is prevented by their appointing state from casting an electoral-college ballot that violates state law lacks standing to sue their appointing state because they hold no constitutionally protected right to exercise discretion; and (2) whether Article II or the 12th Amendment forbids a state from requiring its presidential electors to follow the state’s popular vote when casting their electoral-college ballots.

Issue(s): Whether the government-debt exception to the Telephone Consumer Protection Act of 1991’s automated-call restriction violates the First Amendment, and whether the proper remedy for any constitutional violation is to sever the exception from the remainder of the statute.

Issue(s): Whether the U.S. Court of Appeals for the Armed Forces erred in concluding – contrary to its own longstanding precedent – that the Uniform Code of Military Justice allows prosecution of a rape that occurred between 1986 and 2006 only if it was discovered and charged within five years.

Issue(s): Whether, when the Lanham Act states generic terms may not be registered as trademarks, the addition by an online business of a generic top-level domain (“.com”) to an otherwise generic term can create a protectable trademark.

Issue(s): Whether the U.S. Court of Appeals for the Armed Forces erred in concluding – contrary to its own longstanding precedent – that the Uniform Code of Military Justice allows prosecution of a rape that occurred between 1986 and 2006 only if it was discovered and charged within five years.

Issue(s): (1) Whether the First Amendment invalidates a longstanding state constitutional provision that limits judges affiliated with any one political party to no more than a “bare majority” on the state’s three highest courts, with the other seats reserved for judges affiliated with the “other major political party”; (2) whether the U.S. Court of Appeals for the 3rd Circuit erred in holding that a provision of the Delaware Constitution requiring that no more than a “bare majority” of three of the state courts may be made up of judges affiliated with any one political party is not severable from a provision that judges who are not members of the majority party on those courts must be members of the other “major political party,” when the former requirement existed for more than 50 years without the latter, and the former requirement, without the latter, continues to govern appointments to two other courts; and (3) whether the respondent, James Adams, has demonstrated Article III standing.

Issue(s): Whether - when in Agency for International Development v. Alliance for Open Society International Inc. , the Supreme Court held that the First Amendment bars enforcement of Congress’ directive, which required respondents, United States-based organizations that receive federal funds to fight HIV/AIDS abroad, to “have a policy explicitly opposing prostitution and sex trafficking” as a condition of accepting those funds - the First Amendment further bars enforcement of that directive with respect to legally distinct foreign entities operating overseas that are affiliated with respondents.

Issue(s): Whether a criminal conviction bars a noncitizen from applying for relief from removal when the record of conviction is merely ambiguous as to whether it corresponds to an offense listed in the Immigration and Nationality Act.

Issue(s): Whether an unsuccessful attempt to detain a suspect by use of physical force is a “seizure” within the meaning of the Fourth Amendment, as the U.S. Courts of Appeals for the 8th, 9th and 11th Circuits and the New Mexico Supreme Court hold, or whether physical force must be successful in detaining a suspect to constitute a “seizure,” as the U.S. Court of Appeals for the 10th Circuit and the District of Columbia Court of Appeals hold.

Issue(s): Whether a grand-jury subpoena served on a custodian of the president’s personal records, demanding production of nearly 10 years’ worth of the president’s financial papers and his tax returns, violates Article II and the Supremacy Clause of the Constitution.

Issue(s): Whether the Committee on Oversight and Reform of the U.S. House of Representatives has the constitutional and statutory authority to issue a subpoena to the accountant for President Trump and several of his business entities demanding private financial records belonging to the president.

Issue(s): Whether the Committee on Financial Services and the Intelligence Committee of the U.S. House of Representatives have the constitutional and statutory authority to issue a subpoena to creditors for President Donald Trump and several of his business entities demanding private financial records belonging to the president.

IMO…it’s all about social distancing. Some of our Justices are pretty old?

IMO…it’s all about social distancing. Some of our Justices are pretty old?

They COULD hold the sittings. They DON’T want to set a precedent for using technology, which is why they are cancelling the sittings outright.

They could set up videoconferencing, either from each Justices home or chambers.

The Clerk and Marshal could observe the proceedings by video from the Supreme Court Courtroom.

Counsel for the Petitioners could participate from the finely appointed Federal Circuit Courtroom. 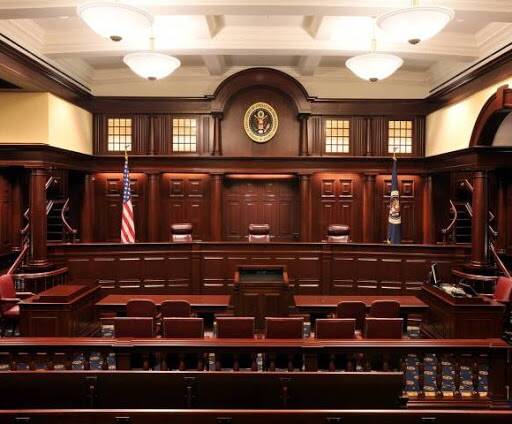 Counsel for the Respondents could participate from the not as finely appointed DC Circuit Courtroom.

The Justices would be safe. Participants would be dispersed. Audio could be saved and the video deleted after proceeding were complete. A transcriber would be hooked in from the Supreme Court’s press room to transcribe the proceedings.

The Supreme Court should NOT cancel its proceedings. It can hold oral arguments safely as described above.

They simply don’t want to give people arguments in favor of allowing the televising of proceedings, which is why they are proceeding as they are.

I don’t know if either of those will work? Justice Sotomayor…I know…needs a safe space.