I found a strange footnote of history recently: While Canada and Austria fought each other in World War I, both interned Ukrainians from the Carpathian Mountains as enemy aliens / enemy sympathizers. The Canadians interned the people because they were technically Austrian nationals (and therefore enemy aliens) since their home region was ruled by Austria-Hungary. The Austrians imprisoned people from the same villages because they were allegedly Russian sympathizers and therefore not sufficiently loyal to the Austrian government.

For background, here is a description of Canadian internment camps, which included living in tents in arctic conditions while constructing park facilities in the Canadian Rockies: 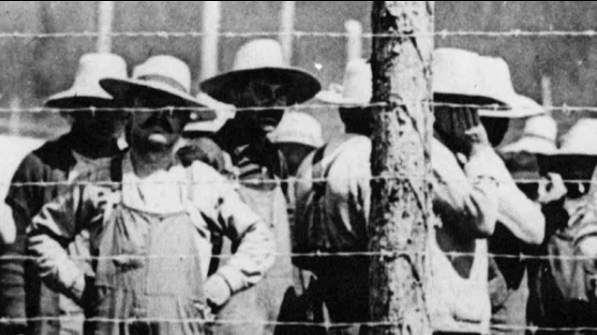 In 1914, immigrants from Austria-Hungary, Germany and the other Central Powers were rounded up and locked away in internment camps. More than 8,000 people who considered themselves Canadian were imprisoned for being “enemy aliens.”

Here is a description of the Austrian prison camp for Ukrainians during World War I:

Thalerhof (also trasliterated as Talerhof from Cyrillic-based East Slavic texts) was an concentration camp created by the Austro-Hungarian authorities during World War I, in a valley in foothills of the Alps, near Graz, the main city of the province of Styria. The Austro-Hungarian authorities imprisoned Carpatho-Rusyns and Ukrainian Russophiles, as well as other Ukrainians and Lemkos from Galicia and Bukovina, considered unreliable during wartime. The first group of prisoners was interned in Tal...

Canadians and Austrians may have been at war, but they both agreed that Slavic peasants from the Carpathian Mountains could not be trusted and belonged in prison. History is very weird.

Strange bit of history, there is a good movie on the subject called freedom had a price.

Thanks for the information; I have not seen the movie.

In 1914, Canada was still a British colony; it automatically went to war when the British government declared war. From what I have read, the war created huge controversy in Canada especially from French Canadians and recent immigrants.

I recently found my grandfather’s record from World War I. He registered as an enemy alien in the US since he was still an Austrian citizen. The US did not have internment camps, but the registration meant that they could not draft him. The designation as an enemy alien was actually a blessing in that respect. Other distant relatives who immigrated to Canada may not have been so fortunate, but I have not found any information on them.