Taking over a state park and threatening to destroy the monument takes it into a whole new level.

How was Lavoy Finicum and his party treated for taking over a cabin on federal land?

Can’t have black armed people in a park.

Funny I didn’t see a post from you about the “takeover” of the Michigan state capital building.

Coalition? Seems okay to me. What would you change it to?

Or just get rid of it altogether? That I like.

I’m thinking leave it off. What’s it a coalition of.

You may be able to peddle that bull ■■■■ elsewhere but it ain’t selling with me.

Nobody but you made such a bull ■■■■ racist accusation/claim.

You may be able to peddle that bull ■■■■ elsewhere but it ain’t selling with me.

Nobody but you made such a bull ■■■■ racist accusation/claim

Lol. Where did I call you a racist? Just said that you where missing in action on the armed “takeover” on Michigan’s state capital.

At least be consistent with your faux outrage.

Oh, the horror of it all!

Anyone showing up to “challenge them” would be acting unlawfully. Any violence that broke out as a result would be on them and so it would take a bunch of fools to do so.

There was no takeover of the capitol and no threat.

There was no takeover of the capitol and no threat

And the same at Stone Mountain. Right?

The down side is that it’s an escalation. Eventually a dumb person somewhere will do something and things could go very wrong.

This is the canary in the coal mine that’s waiting to happen sooner or later. A large group of armed protesters marched through Georgia’s Stone Mountain Park, calling for the park’s massive Confederate carving to be removed

“Stone Mountain Memorial Association spokesman John Bankhead said there were between 100 and 200 protesters. He said the protesters, many of whom carried large rifles, were peaceful.”

No, in the real world. There was no takeover. It was a peaceful protest that occured without incident. 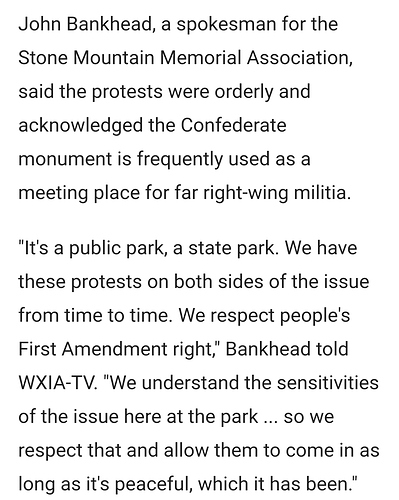 Look at the justice system, where black man are incarcerated at a much higher rate than white men are for identical offenses.

I believe if you reload your avatar it might reappear.

Why is that your opinion? No one else I have seen has expressed any such thing.

BLM is a terrorist organization and should be treated as same

The “Terrorists” were in Dover this past Friday. Everyone was terrorized and were seen running away from the protest in stark terror. LOL.

Instead of the hyperbole.

Deal with the reasons for the protest.

Knee on neck for 8 plus minutes.

No one else I have seen has expressed any such thing.

WR stated it was a takeover of the state park.

Oh, the horror of it all!

Indeed. And we’re also seeing the nervous twittering of “escalation” and “takeover” and expressions of the likelihood it will turn to violence. So often there is some distinguishing characteristic that has to be expressed when black Americans are the ones legally bearing Arms. It’s a frequent strain and calls out the credibility of many defenses of the second amendment, because there are so many that elevate its value only when certain populations exercise it.

I’ve been on Sean’s board since 2005. If you want to see scrupulous and consistent application of a defense of the second amendment regardless of race or population, look to sneaky’s posts.

If you want to see relativism, there are other viewpoints that get frequent expression.