Longtime Clinton insiders confirmed Sunday that the former Secretary of State and twice-failed presidential nominee is considering a third run for the White House in the coming months, reports the Hill.

This is a companion discussion topic for the original entry at https://www.hannity.com//media-room/report-clinton-insiders-say-hillary-considering-a-third-run-for-the-white-house/
charlie15 January 27, 2019, 7:20pm #2

How could anyone-even Dems-vote for Hillary. She looks mentally ill. I can’t imagine anyone who voted willingly to want Hillary and her moronic husband leading this country. If not for Pres. Trump the USA would be a banana republic. Don’t know which is worse banana republic or Venezuela. We are definitely heading that way. Pelosi and Schumer should have been gone from public view a long time. Pelosi has used her position to become a multi millionaire and to travel the world at the tax payers expense. Of course, she wants to stay. Schumer is a back stabbing little creep who would gladly open the gates to anyone who wants entrance to the USA for votes. TERM LIMITS I have been advocating what Tomi Laren stated today. Run for office when you are IN office —RESIGN. We, the prople, are paying them to campaign and when they lose go back to their cushy jobs.

Just thought of an extra hopeful…Perhaps we won’t have to give Hillary a second thought by the time of the next election. Shouldn’t she be indited or hopefully serving time

Does Chuckie even know the interpretation of the word humanitarian. He should explain it to the people who have lost their loved ones to the illegals he wants to protect and allow in the country for votes. He has no shame nor any ethics

OMG … Somebody hank a pork chop around her neck and get her a dog. She is desperately in need of attention.

She’s still free because she had a lot of people in powerful positions watching her ass. This is one person who should be behind bars. If there was any collusion with Russia it was done by the Clintons in order to get Hillary elected. She’s crooked and mentally ill. If she was in her right mind, she would stay out of any Presidential race that she lost twice and will continue to lose. She belongs in a sanitarium for people who have severe obsessions because in her case, she fantasizes taking the Presidency. She still thinks she can rake the American people over the coals and stuff her bank account as the Clintons have done in the past. We’ve had enough of this insane woman. She should be ashamed to show her face.

Hillary is completely delusional! Senility, delusions of grandeur, I don’t know! But she is guilty of a legion of crimes & belongs in prison! She’s the Clinton Mafia Boss! What makes her think she should be president?

Really hope Hillary runs. The Clinton’s are vicious to anybody who crosses them and 83.7% of the Democrat Party has announced their run for President. If Hillary is serious, she has already hired the lawyers and the goons she will employ. The dossiers are being prepared as I write. I can’t wait to see this bloodbath of course it is richly deserved!

Just have another glass of your famous Chardonnay, Hillary, go home and get out of our faces! Will we EVER be rid of the Clinton Criminal Machine, or will we have to wait until both of them die natural
deaths ?

My worst nightmare is hearing this! “I’m baaaack!!!” I think I’m gonna be sick.

What makes her think she should be President? She believes that she is untouchable and above the law like some medieval monarch. Well guess what Hilary ? The last ones like that in England and France lost their heads. What makes you think you will fair better?

Grifters don’t just walk away from that level of grifting.

Speaking of the First Grifters, not satisfied with the massive “help” that they provided Haiti, the Clintons’ are on the ground in Puerto Rico and complaining about Trump blocking millions of aid dollars that they can’t yet get their hands on.

Given how corrupt the Puerto Rican government is there must be a serious payday on the way.

Hey, if the locals don’t like it they can always move to Haiti which the Clintons’ have already “fixed”. 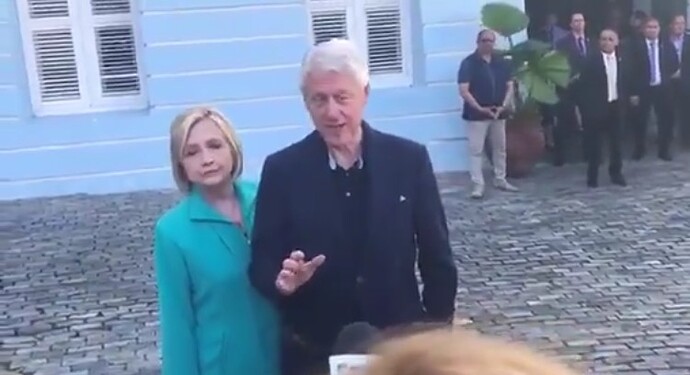 HAITI 2.0-> Clintons Travel to Puerto Rico to 'Assist' with Hurricane...

The Clintons arrived in Puerto Rico over the weekend to ‘assist’ the US territory in their hurricane recovery efforts. This is Haiti 2.0. The Clintons perhaps ran out of the billions of dollars they reportedly stole from the Haitians years ago after...