Ever notice how much Pompeo looks and even sounds like Norm from Cheers?

One of my favorite lines…two chins and four cheeks Pompeo.

I don’t remember such protests during the Obama years…

Luckily no one relies on your selective memory. Umbrella Movement A series of sit-in street protests, often called the Umbrella Revolution (雨傘革命) and sometimes used interchangeably with Umbrella Movement (雨傘運動), or Occupy Movement (佔領行動), occurred in Hong Kong from 26 September to 15 December 2014. The protests began after the Standing Committee of the National People's Congress (NPCSC) issued a decision regarding proposed reforms to the Hong Kong electoral system. The decision was widely seen to be highly restrictive, and tantamount to t...

At least when seeing that flag, it’s possible for one to say HEY! That’s an idiot in that shirt, car, house, whatever. I think I’ll stay away.

That’s not as easy when you realize you’re dealing with someone whose ancestors they brag about being anti slavery probably refused to hire free black men for good jobs. Or they seem like nice people until they start talking about such niceties as “demographics”, or don’t utter insults like the n word, but have no problem at all with economic policies that increased cost of living for those struggling, or keeping black people from working or attending school.

I’ll take the idiot with the flag over the triple S racists (snide, sneaky and subtle). Even Malcolm X, who lived in Boston for many years, preferred the in your face idiots to those.

This was inevitable. I’m not surprised.

And we should stay out of it.

If anyone is at fault it’s the British.

I agree it’s the Brit’s fault, I never understood why they gave it up. I do think we should let China know if they take away their freedoms we will stop doing business with them. I just think we should stand for the principles of freedom. I know we can’t get involved militarily & I’m not saying that.

I do think we should let the Chinese government know we will arm Taiwan, Japan, & the surrounding states if they continue down their present path because we believe they will soon be threatening them all. I think we should also recognize Taiwan as a separate & sovereign state.

If there is no consequences they will continue to do worse. China is now set to become more oppressive than North Korea. They, with the help or IBM & Google are setting up an ultra mass surveillance state to monitor it’s subjects 24/7.

They are using a politically correct social credit system replete with an inescapable network of surveillance cameras keyed to facial recognition, China has morphed into a technocratic totalitarian state that has built in punishments for not keeping in line.

Be religious & lose credits, especially certain ones uber targeted by the state.

You will be given daily “tests” of proclamation of praise for the great leader, & China, & fail to do that you lose credits. Speak a complaining word or make a negative statement anywhere any time of the state or great leader & lose credits.

Getting the drift? It’s probably why the people of Hong Kong are so anxious about their civil liberties & the protests are continuing. They know the fate that awaits them.

I believe the road China has taken will kill the goose that lays the golden eggs. That level of authoritarianism will take the spirit out of the people, destroy innovation, & eventually destroy their economy.

I also think most foreign companies in China will soon decide doing business there is just too risky. I hope I’m wrong.

The Army has entered Hong Kong this will be getting very bloody.

The Army has entered Hong Kong this will be getting very bloody.

I didn’t know that. It will be bad for us all.

Despite China's attempts to portray the action as routine, experts say China may be signalling its readiness to use force to quell Hong Kong protests.

Liberal communists secretly cheering on the Chinese regime. Must be all those racist American flags being held up in Hong Kong.

Let me pose an hypothetical.

Someone is at a D Trump rally and starts to wave a Chinese flag. I am sure no-one on here nor D Trump would have any problem whatsoever with that action.

Trump says China would be harder on Hong kong if not for his trade talks.

Obviously, Trump loves Tariffs and it would give him an excuse to make them even higher. As they should be.

While letting China into the WTO in hopes of reform was a fine experiment, it has failed. No democracy should be trading with them without reforms.

“handle it, in a humane fashion”

Trumps version of standing up for human rights sounds like something you’d hear a slaughterhouse foreman say.

Let me pose an hypothetical.

No thank you. Americans-only for American politics. I only entertain voices that matter in this country.

What did trump do to achieve this?

What did trump do to achieve this?

He told them it would be real hard to end tariffs if China was oppressing Hong Kong. What did your PM do?

Especially since his govt was part of the coup against Trump…

I’d support their leaving China. What does you PM think?

Good for you, but trump has done nothing to help protesters

Flying that 'Murican flag. I love it. lol 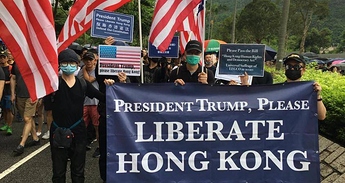