Pelosi urges Trump aides, family to stage an ‘intervention’ for the 'good of 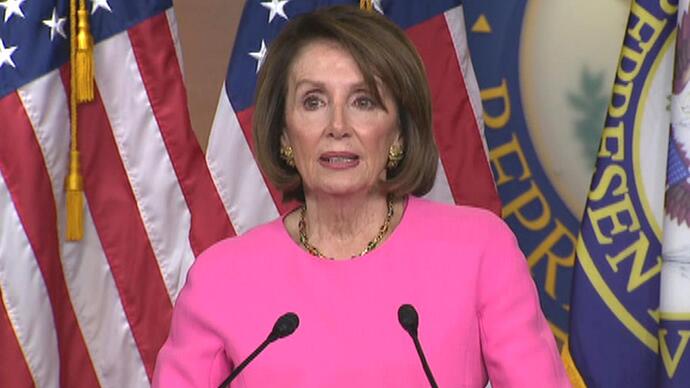 Pelosi urges Trump aides, family to stage an ‘intervention’ for the 'good of...

House Speaker Nancy Pelosi on Thursday urged members of the Trump family, White House staff, and administration officials to stage an “intervention” for President Trump, after claiming again that he had a “temper tantrum" a day earlier.

Wow… I never thought I would see that the speaker of the House is begging the President’s people to help him. I agree he seems to be having mental issues. I hope someone in his life does something to get us off this path of destruction

There is no way that he will respond to this without looking even more unhinged.

Politics aside, i do hope the people around him do get him the help.he needs instead of exploiting him like they have been…

Oh damn, is that show “Intervention” still on the air ?

She sure knows how to throw shade at Trumpy bear.

You know the left has the right people in their corner when one of the most historically hated members of congress, which in previous years they have begged to step down is the leader of the house. Meanwhile the frontrunner in the democratic primary is a man who is pushing 80 and will attempt to run for president for a third time, previously being bulldozed by both Obama and Hillary in the primaries.

one of the most historically hated members of congress,

What is this based on?

Yet she was elected leader of the house, she can’t be that hated.

Pelosi isn’t hated in Congress as much as she is feared.

And the Mockery that is Washington DC continues. Pelosi needs to show respect to the President…I believe he has earned it.

Oh noes it has infected you

That was quick. I think there is something wrong with my sarcasm filter on this thing. It was supposed to be obvious!

It was…you got what you deserved

In all seriousness it is bad form to walk out on a meeting like this. I did it last week, because I was so angry at the blatant negligence of one of my managers that I suspended her pending an investigation, and then walked out. I was making a point, and it scored. I don’t know that the President scored. He may have come off as childish, but I also see what he was trying to do. If Nancy wants to talk trash, then he doesn’t have to put up with it. But the whole timing of the rose garden press conference with the graph on the podium, seems like the whole thing was planned and that is just bad. When I walked out, I was being knee jerk, and trying not to say something I would regret. Trump walking out was just calculated showmanship.

When I see a multitude of problems, I skip trying to figure out why they are there and look right at who is in charge. The problems at the bottom are the results of the actual problem at the top. Now…apply that concept to San Francisco which historically has been considered one of the nicest cities in the US. When I see human feces on the streets, one of the first to declare themselves a sanctuary city to harbor law breakers, a wealthy city that’s fiscally mismanaged into potential bankruptcy…not to mention the Kate Steinle heartbreaker…I don’t need to look any further than Nancy Pelosi. San Francisco needs a political intervention.