Maine's governor, judges and lawmakers are paid less than their peers in nearly every other state, and the State Compensation Commission said that could keep people out of public service.

Yeah, I think I can agree with this. They want to nearly double the salary of the Governor of Maine from $70,000 to $130,000. Maine is currently dead last in this category and would be 35th nationwide if the full raise is approved.

Maine’s judicial salaries are also quite deficient. Near the bottom in absolute terms for both the Supreme Court and trial courts. But when adjusted for Maine’s high cost of living, they are by far the worst in the nation and in fact truly pathetic.

While obviously governments should not be extravagant, neither should they be stingy on such a scale. If you don’t pay enough to attract talented individuals, you inevitably end up with sub par individuals.

It’s Maine. Kind of like being the night clerk at the La Quinta.

Ought to be the national median income.

It’s Maine. Kind of like being the night clerk at the La Quinta.

I should note that even with the increase, they would still be about 49th in the country in judicial salaries when adjusted for cost of living.

So I can safely say there is nothing extravagant about this proposed raise.

With the proposed pay raise, there salary, when adjusted for cost of living, would be just barely above the national median income for attorneys.

People who worked at Cravath for 20 years…

Capitol Hill interns and junior staffers are often in the same boat. These kids made peanuts but somehow lived in Georgetown and drove BMWs…

Make salaries too low, and you create a barrier to entry for people who want/need to earn.

Just for perspective what is the minimum hourly rate in Maine?

First I agree that this raise is modest and just and needed to attract qualified staff.

Second…Pennsylvania isn’t as stingy as I thought it would be nationally.

Recently, the U.S. Bureau of Labor Statistics (BLS) released their report on the Usual Weekly Earnings of Wage and Salary Workers. Using information from the fourth fiscal quarter of 2018, the BLS claims that in that quarter, the median income for a full-time wage or salary worker on a weekly basis was $900. For a 40-hour work week, this translates to a yearly income of approximately $46,800. This is a 5% increase on the previous year. What Is the Average Income in the U.S.?

What is the average income in the U.S. currently, and how do factors like your job and age impact it?

Why attract lawyers? We have far too many of them in politics.

That’s the household income. National median income for an individual is about half that. 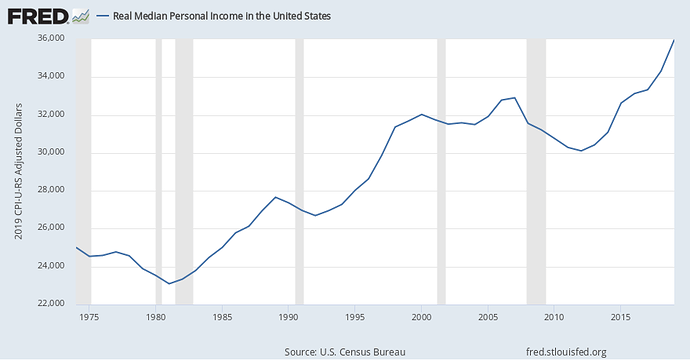 Public servants will be more dependent on advice from private lawyers otherwise. One of the problems with congress right now is how much they depend on lobbyist lawyers to explain things to them.

The biggest problem with Congress is that there are too many lawyers as members.