Nothing to see here folks. I am sure they are bluffing (Taiwan) 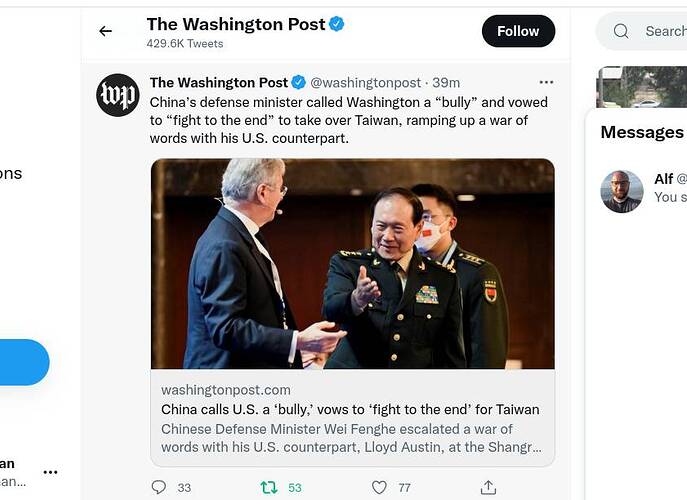 Biden should cut big some checks for companies to build more microchips here. That will be way cheaper than tip-toeing around a world war to protect Taiwan.

this is why the right thing to do in the beginning would have been to quietly support ukraine and let the eu take the lead there while we kept our powder dry for china. but brandon’s gotta thump that chest!

Russia and China only have 2 1/2 years left to make their gains before Trump comes back. Better hurry.

mean tweets are as history as our supplies left in Afghanistan…

This idiot is going to get us into a war.

This idiot is going to get us into a war.

J’Biden hasn’t a clue as to what is going on around him. His inept handlers and politicized military “leaders” too gutless to soil their woke cred will be the ones to ■■■■ that pooch.
Keep in mind, whoever is in charge, are the same dumbasses that engineered the Afghanistan debacle and armed the Taliban with billions in US weaponry and materiel.
BUT there are no more mean tweets?

When it comes to US dealing with China,
bad policy from the US is better than waffling.

We should not walk back any statement we make with them ever.

Honestly, I was surprised when China did not invade Taiwan on the heels if the Russian invasion of Ukraine. I thought there was even a chance they would do it during the Olympics when they had thousands of potential hostages in their possession.

The United States should consider two things before engaging militarily with China over Taiwan.

By billions of dollars in damages, I am talking about one or more Nimitz carriers and other surface combat vessels at the bottom of the Pacific, plus the loss of many, many aircraft.

When it comes right down to the realities of a war with China, the United States will bitch, moan and sanction China, but will acquiesce to China overrunning Taiwan without a fight.

Which, frankly, is a good thing.

You do realize China intends to eventually go to war with us.

You do realize China intends to eventually go to war with us.

They don’t intend to go to war with us. They want Taiwan and will act militarily to that end and militarily to gain their 9 dash line goals.

Actual war is only marginally better for them than it would be for us. They would take a beating in men, but probably far less of a beating in equipment and ships. But they would clearly prefer the United States to stay out of the way militarily when they take Taiwan.

And they WILL take Taiwan.

They want more than Taiwan.

They want more than Taiwan.

They can (and ARE) gaining their economic goals without a shot being fired in many parts of the world.

Witness their many infrastructure projects around the world that consequently makes the recipient nation dependent and indebted to China. They have gained much economic power in this manner.

We can make it extremely costly for China…by selling Taiwan the right weapons…weapons to take out landing crafts and other troops transport etc.

I’m not a military expert nor do I pretend to be one.

In his memoirs, The Second World War, Volume 2,
Winston Churchill wrote
"The only thing that ever really frightened me during the war was the U-boat peril. "

I hope we start heavily subsidizing domestic production of all the things we import from Taiwan now, so there’s no political pressure to do something desperate when the time comes. Should have started years ago.