"Mike Randall, Vice President of the Fallen Officers Foundation, which organizes the Blue Bowl, says things started going south when he allegedly got a text from Hagel saying there were serious issues with the event, specifically that the speakers would cause local political issues.

The Blue Bowl speaker list was bipartisan. It included Gov. Gavin Newsom’s public safety liason, Trump supporter Scott Baio, who went to the same church as Sgt. Helus, as well as Trump-supporting singer Joy Villa, who was to sing the national anthem.

Randall says in a phone call, Hagel questioned why the Trump supporters were invited.

“He basically said over and over in the conversation this is not Trump country, that slogan ‘Make America Great’ is not favorable, popular, within 1,200 square miles, that we don’t want Republicans here, I could not believe it… We were totally floored by this comment, ‘the only thing,’ and I quote, ‘the only thing you coulda made this worse, Mike, was to invite dick Cheney and Sarah Huckabee Sanders,’ and I went…wow are you kidding me?” Randall said." 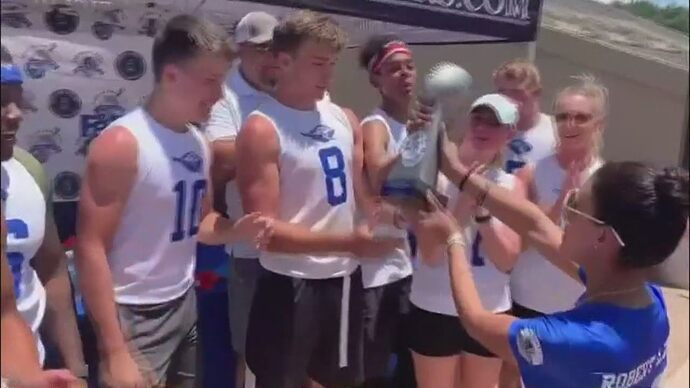 A charity flag football event in honor of fallen Ventura County Sgt. Ron Helus, the deputy killed in the Borderline mass shooting in 2018, has been put on hold after organizers say a local police chief and a Democratic politician derailed it...

Could liberals get any more petty?

‘■■■■ the family of the fallen Deputy, our partisan politics is more important.’

This is just flat out wrong. It’s not a political event. Speakers from both sides of the divide were scheduled. I may not agree with Scott Baio’s politics, but no one should argue against his speaking at a memorial for a member of his church. And a major point of the rally was to raise money for the victim’s family. Now that won’t happen.

Bad move by Tim Hagel. One I’m guessing/hoping will come back to haunt him at election time.

Environment that libs have created…they should be proud.

Environment that libs have created…they should be proud.

By all means, let’s take one jackass’ action and attribute it to an entire class of people.

What a Republican thing to do.

Hagel is a disgusting human being and that goes for his sick supporters too.

Are you denying that libs have created this environment?

Are you denying that libs have created this environment?

What environment? Where an isolated incident of misbehavior is used to tar half the adult population of this country? Oh, I think there’s plenty of blame to spread around for that.

Oh no you don’t…you don’t get to blame libs actions on conservatives or even Trump for that matter.

You have people that’s been assaulted for wearing MAGA hats. And that’s all on the left.

Oh no you don’t…you don’t get to blame libs actions on conservatives or even Trump for that matter.

You have people that’s been assaulted for wearing MAGA hats. And that’s all on the left.

I’m not. I’m blaming Tim Hegel for Tim Hegel’s actions, not all “libs” (or ANY Republicans). You shouldn’t either.

Or shall we condemn all Trump supporters for those few at his campaign rallies who got violent with the opposition?

I’m sorry…the toxic environment that we are witnessing today has been created by libs and media because. They still haven’t gotten over losing to Trump.

The blame rest on libs shoulders.

Try to relate to people as individuals, not groups. You might be more at peace with the world.

I’m sorry…I’m placing the blame right where it needs to be.