Libs, so you think the D.C 4th of July party too expensive?

92 million dollars in taxpayer monies is a small price to pay to thank Donald. That’s why the Tea Party doesn’t organize and march on DC - they know that our POTUS needs this encouragement to keep going in the face of very very mean and very very unfair criticism. Libs would have spent that money anyway on something worthless like a socialist program or alternate energy companies that fail or Planned Parenthood or some gun grabbing scheme - why not use it instead to bring out some brand new Sherman tanks and let Donald enjoy himself for a change?

Where did you get that estimate of cost? Citation?

Ok. to all you libs who have suddenly become deficit hawks. Let this sink in. The amount of money that this event will cost is equal to roughly 20 seconds worth of federal spending. Your government spent more money in the time I spent to type this, than the entire 4th of July event. And this where you are choosing to draw your spending line in the sand? Whatever.

We have to take money from National Parks entrance fees, meant for parks maintenance, to finance the extravaganza revolving around Donnie. That’s what people are not happy about.

This was already an event with it’s own budget. Until Donnie took it over to make it all about him.

The national parks had to raise entrance fees before this to make ends meet. This is a blow to their budget.

Where did you get that estimate of cost? Citation?

Based off the estimation defense officials gave in 2018 for the military parade that was scuttled in 2018.

What does it matter whether it costs $9 or $92 million? It’s money well spent to thank Donald for saving America! Besides, it creates jobs, and Donald’s pro-life. 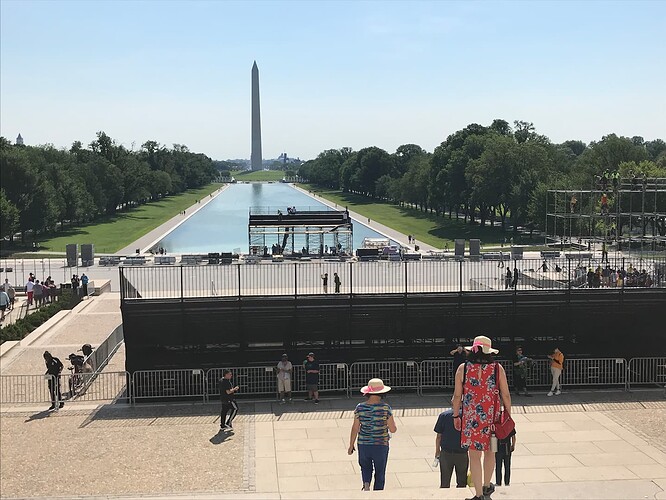 Trump’s July 4 celebration will cost millions — and it will take a while to...

Pentagon plans to use creative accounting to handle the military portion of the event.

My problem with it is that it is likely going to be a publicly financed campaign event for the President.

I don’t care which letter a President has behind their name, it is not right.

My problem with it is that it is likely going to be a publicly financed campaign event for the President.

I don’t care which letter a President has behind their name, it is not right.

Donald has every right to use the event to explain to the American people that he’s done an amazingly amazing job and America is great again thanks to him.

Maybe he wouldn’t have to use a 4th of July parade to do it if the media was nicer to him.

Wait…so because libs want to spend money making sure all americans have health care, we have to allow spending money to drive tanks around the city?

As long as we dont spend money on big bird episodes and PBS!

Can’t wait to hear Donald talk about everything he’s done to make America great again. Ordinarily the only place you can hear about it is his twitter feed and talk radio, because the Deep State is deliberately refusing to acknowledge his selfless work on our behalf. But tonight it will be all over Fox News!

OP, why do you care what “libs” think? Why don’t you care about your orange boy keeping service members involved away from their families and spending an obscene amount of taxpayer money on his own ego?

As long as we dont spend money on big bird episodes and PBS!

Why spend taxpayer dollars indoctrinating children to embrace socialism and deviant lifestyles, when instead they can be spent on a fabulous parade showing gratitude for the Man who saved America? Donald deserves a second Purple Heart for all the sacrifices he’s made.

I was wondering that too. I’ve seen estimates from 45 seconds to 6 minutes.
The 20 second estimate is just pie in the sky.

Our president is a draft dodger.

His followers are a ton of military as he uses them for photo ops.

At least conservatives will stop complaining about the cost of the Mueller investigation. It cost $32-35 million and resulted in convictions and the release of information. The parade is estimated to cost $90 million. Three times the price to stroke the ego of Dear Leader for a few hours.

Who am I kidding…as long as Trump wants it, his followers will clap and cheer. If Trump doesn’t want it, back to booing and hissing.

Our president is a draft dodger.

His followers are a ton of military as he uses them for photo ops.

Roaming bone spurs is NOT draft dodging, it’s a terrible affliction that kept our otherwise astonishingly healthy POTUS out of combat in his youth.

Lucky for the VC, too - he would have ended that war in half the time and at a fraction of the cost.

If there hadn’t been 8 years of OMG AIR FORCE 1 TOOK OBAMA ON VACATION AND MY TAX DOLLARS PAID FOR IT, and things like that from many people who now support Trump, the spending on this parade wouldn’t appear so hypocritical and I suspect there would be less kvetching about it.

The people who WERE deficit hawks under Obama now no longer care about wasteful spending. But if a D wins in 2020 they will. Maybe having a D president actually is good for America, because it forces some on the right to become fiscally responsible.

If you aren’t running a surplus any celebration costs too much.

What are you basing your math on? We don’t know the cost of this latest soiree, but last August when Trump attempted to have one estimates ran north of $90 million. That is far more than 20 seconds worth of federal spending.

Because that parade was gonna be a big old full blown event with military personnel and equipment lined up from one end of Pennsylvania Avenue to the other marching by. This is just a few pieces of equipment on display and not nearly as many personnel.

Because that parade was gonna be a big old full blown event with military personnel and equipment lined up from one end of Pennsylvania Avenue to the other marching by. This is just a few pieces of equipment on display and not nearly as many personnel.

You make today’s parade sound so…shabby. Donald assured us it will be most bigly!

People are coming from far and wide to join us today and tonight for what is turning out to be one of the biggest celebrations in the history of our Country, SALUTE TO AMERICA, an all day event at the Lincoln Memorial, culminating with large scale flyovers of the most modern.....

Yes, “shabby, but bigly!” is the theme of today’s presentation.