Apparently Trump said he was willing to take large down payment on the wall to end partial federal shut down.

And Nancy told him to go you know what.

The possible concession from the White House came just minutes after the Senate rejected both Democratic and GOP proposals to end the shutdown, with both measures falling far short of the 60-vote threshold needed to pass.

But Democratic House Speaker Nancy Pelosi dismissed the proposal shortly afterward as a nonstarter, saying it was “not a reasonable agreement.”

Now Trump you need to demand all of it…and start firing/laying off federal workers.

The economy is booming, they can get real job or go on welfare.

And before some of you say I don’t care…I don’t care any more then libs do about those that have been effected by illegal immigration and impact on blue collar workers/wages. 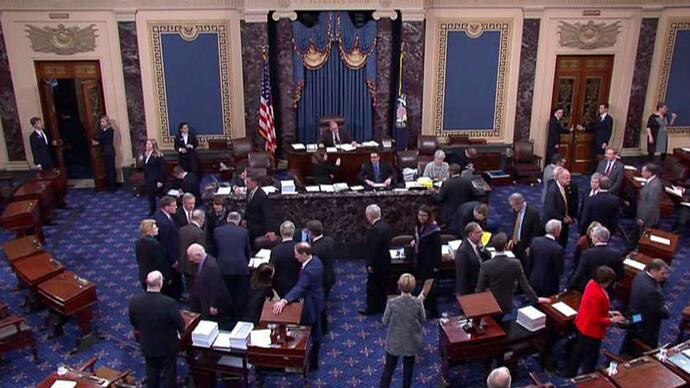 The White House on Thursday signaled that a "large down payment" on border wall funding -- and potentially less than the $5.7 billion that President Trump has long requested -- could be sufficient to bring Republicans to the table and end the ongoing...

And that stupid refresh thing.

One other thing I should add. CoJ needs to get their corrupt FBI to investigate drug money going to DNC.

Their are other reasons why they’re refusing to secure our border.

Trump has been nice, made concessions, but Nancy could care less about fed employees, which is why she won’t counter offer…

Ask the federal employees how nice Trump is to stop their paychecks.

Pelosi’s counter offer is to open the government. Seems reasonable. Doesn’t Trump want that too?

Ask the federal employees how nice Trump is to stop their paychecks.

I don’t know a single person that is effected by this so-called shut down.

But I know lot of people that their livelihood effected by illegal immigration.

I don’t know a single person that is effected by this so-called shut down.

But I know lot of people that their livelihood that’s effected by illegal immigration.

I live in a border town.

I know LOTS of people affected by this shutdown.

Tell that to those that had to survive on repressed wages competing with illegals.

Tell that to someone who…or one of their family members that is addict.

Tell that to someone who lost a love one.

Yeah…I feel so sorry for those goverment workers.

Compassionate conservatism on display in the op.

Tell that to those that had to survive on repressed wages competing with illegals.

I dont know anyone who has been effected by that. Therefore, it’s not important

How fascinating. The opposite is true for me.

On the other hand, I don’t know anyone who’s life has been negatively impacted by illegal immigration.

I understand that Republicans largely do not care about the government workers being affected by this shutdown.

I personally know many border patrol agents. They go to my church.

To be honest, I care more about the janitors, and shop owners, and cab drivers than I do about ICE.

She cares more about illegal votes.

Seriously…I wonder how many tens of millions of dollar in drug money flowing through DNC and their candidates to keep that border open.

Yep that must be it!

Now let’s make believe and say this is true…what is a wall gonna do about it?