According to Reuters, the South Korean leader unveiled his high-stakes discussions with Kim regarding a permanent end of the Korean War, saying the dictator will not demand the complete removal of US forces in the region as a pre-condition for abandoning his weapons program.

“North Korea is expressing a will for a complete denuclearization,” said Moon following the meetings.

“They have not attached any conditions that the U.S. cannot accept, such as the withdrawal of American troops from South Korea. All they are expressing is the end of hostile policies against North Korea, followed by a guarantee of security,” he added.

The announcement comes just weeks before President Trump is set to talk with North Korean despot Kim Jong Un; the first face-to-face meeting between the leaders of both nations in history.

Maybe we can wait until the actual talks before we declare Kim has caved?

This seems extremely odd, akin to Trump deciding to no longer use Twitter.

If this is true…even I gotta stand up and say this is a good thing. Trump handled this well in my opinion. But…he Will turn right around and ■■■■ it up by tweeting something reprehensible about Kim…and that will be that. I hope he takes the high road.

Worth watching, but I’ll agree with the others here - believe it when you actually see it.

Haven’t we heard this before?

NK can’t give up their nukes. It’s their trump card.

Now, they may say something publicly but keep it going covertly.

Trump hinted that direct talk between U.S/NK have already happened.

Trump hinted that direct talk between U.S/NK have already happened.

That was the whole Pompeo met with them awhile ago thing I assume?

I’ll believe it when I see it.

North Korea has Trump confused with Madeline Albright. They think they can lie and then the idiot Americans will celebrate with champagne. 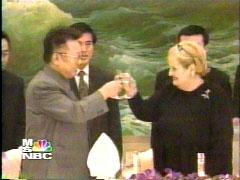 Trump won’t do that. Because he’s not stupid.

Anyone ever figure out why Obama bombed Libya into chaos and left it that way?

I am no fan of Trump but if he can help to bring about a significant change of how NK interacts with SK and the rest of the world i will be among the first to give him the credit.

Interesting. Was the same standard of acceptance used in evaluation of the Iran nuclear agreement recently made? Were there headlines here then: “AYATOLLAH CAVES” ? At that point there were signed documents followed shortly by verified actions. Here, the US has what, exactly?