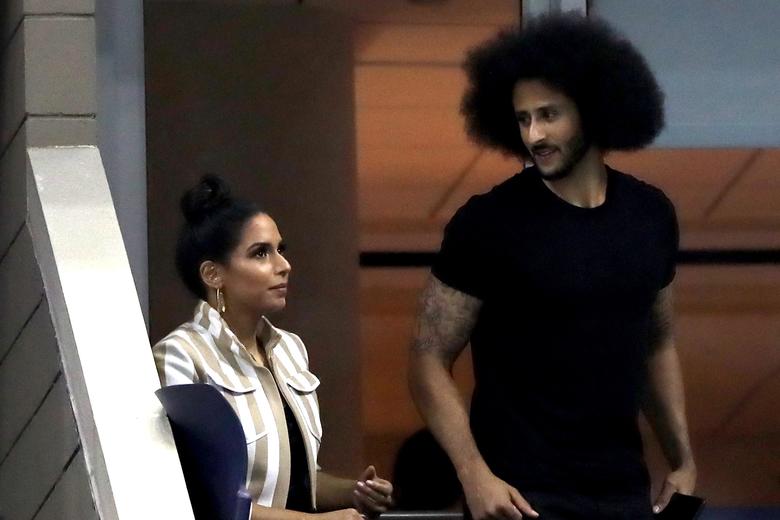 How Colin Kaepernick Beat the NFL

The quarterback's settlement with the league is vindication, though it's unclear whether he'll play in the NFL again.

Although the precise details of the settlement are as of yet unknown, it’s difficult to view the resolution as anything but a victory for Kaepernick and Reid. It will certainly be a win for the players financially. Bleacher Report’s Mike Freeman reported that NFL teams were speculating the settlement with Kaepernick alone could have been in the $60 million to $80 million range.

Kaepernick filed his grievance against the league in October 2017, alleging that one or more teams had colluded with each other and/or the league to keep him out of the NFL because of his decision to kneel during the national anthem in the 2016–17 season as a protest against police brutality and systemic racism.

The owners opted to listen to the hate filled rantings of Trump and those like him and punish a good man for the simple act of trying to shed a little light on a problem that has been allowed to continue for far too long by doing something that would make people take notice.

This is excellent news for all freedom loving Americans. God Bless the USA!

The owners didn’t have a choice. All it would take is a few emails and that stuff would be subpoenaed.

Oh, the NFL ratings (they were already king by a mile) were up this year. That probably pisses off the NFL haters.

On to the NBA’s second half.

I think the NFL just wanted to it all to go away.

I don’t believe though there was ever any real conspiracy to keep him out of the league. He just wasn’t good enough anymore to warrant the media distraction and fan revolt that would happen if he was signed. Much like Tim Tebow who was beloved by fans but too much because he caused a huge media distraction everywhere he went. As such teams didn’t want to deal with the distraction. If Kaepernick was a top 10 QB in the league though he’d have been resigned because winning solves everything.

Other kneelers, Kenny Stills for instance, got new contracts even after kneeling. But that because they were good. Stills could go to any team in the league right now and at worst be their #2 receiver and on several teams be their #1. Kaepernick isn’t even a top 40 QB in the league anymore. His good years were during the gimmick read option years but once defenses figured out how to defend that his production dropped off and he was unable to adjust to running a conventional offense.

I don’t believe though there was ever any real conspiracy to keep him out of the league.

In my opinion, any “collusion” or “conspiracy” among owners was each owner colluding on his own with basic common sense. All came to the same conclusion. What owner wants the sideshow that K brings?

Well since Kaepernick was a second tier level quarterback and couldn’t earn a living in the NFL, he had to find a way to get paid.
He was certainly good at promoting himself, but not so at winning as a QB.
NFL owners were smart not to want all the baggage that came with this guy and didn’t hire him for that reason, imo.

I respect your opinion but i must digress. The NFL owners knew they could be called to testify during a trial. They’d have to tell the truth or risk lying under oath. They knew their asses were in a sling. Who settles a lawsuit for tens of millions of dollars when they can prove they’ve done nothing wrong? To say that He isnt good enough to be a backup on a losing team is lazy at best. Kaepernick took his team to the superbowl, how maby activve NFL quarterbacks can say that?

I respect your opinion but i must digress. The NFL owners knew they could be called to testify during a trial. They’d have to tell the truth or risk lying under oath. They knew their asses were in a sling. Who settles a lawsuit for tens of millions of dollars when they can prove they’ve done nothing wrong? To say that He isnt good enough to be a backup on a losing team is lazy at best. Kaepernick took his team to the superbowl, how maby activve NFL quarterbacks can say that?

Not sure who your replying to.

Kaepernick is absolutely good enough to be a backup on many teams. Even most of his fiercest critics will admit that.

If Kaep was a top 10 QB in the league with a legitimate chance of taking his team to the superbowl fans might willing to forgive the signing and a team / coach might be willing to put up with the distraction. But he’s not and never was. Yes he played in a superbowl but it was on a team with a stellar defense and utterly devastating ground game offense. He was the perfect QB for the time as San Fran was running the read option offense which was a gimmick offense that took the league by storm for a few years.

The read option in case you don’t follow football is an offense where the QB holds the ball til the last possible second before either handing it to a running back or keeping it and running himself or occasionally passing. It depends on how the defense reacts. It took a while for defenses to get to where they could readily defend it and it lost effectiveness. Once it lost its effectiveness Kaep had to start running a conventional offense and his flaws (primarly his accuracy on medium and deep throws) became pronounced.

But his accuracy percentage on his throws was 70% last season he played some will say. Thats because he was so inaccurate that his coaches gave up on throwing deep and only called short passes which give you a high percentage but doesn’t put points on the board which is why he was 1-11 in his last 12 starts. Think about basketball. Shaquille O’Neal retired with a career 56% shooting percentage. Stephen Curry, considered by many to be the greatest NBA shooter of all time, currently has a career 47% shooting percentage. Was Shaq a better shooter or is just the fact that most of Shaq’s shots were dunks just like Kaep’s passes or dump offs and screens.

NFL fan revolt over someone protesting over excessive force by police and the injustice in our justice system against minorities… How sad is that?

Los Angeles Lakers forward LeBron James said the controversial former football player Colin Kaepernick “gave up everything” when he protested during the national anthem at National Football League games, praising him for his “sacrifice.”