Just an interesting map of the Louisiana jungle gubernatorial primary 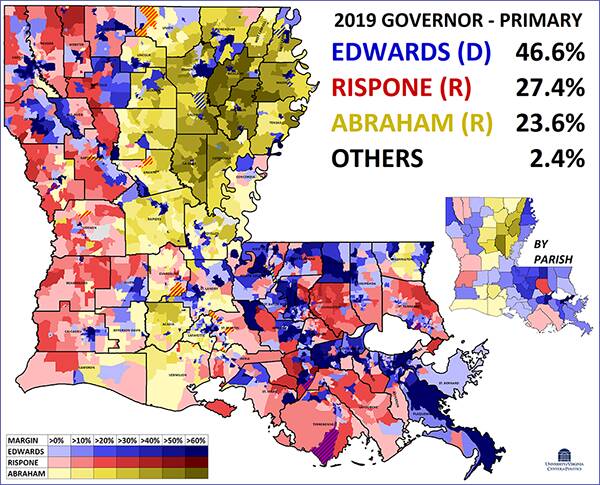 The map is from an article at Larry Sabato’s Crystalball, which can be found at the above link, about halfway down the page.

Louisiana is, shall we say, unique in the United States in its politics and is politically fragmented like no other State.

I just found it interesting how Abraham’s support went down the middle of the State, while Rispone’s was split most to either side.

While Rispone’s and Abraham’s combined vote percentage was an absolute majority, slightly over 51%, the runoff should be considered to be a dead tossup. It is NOT a given that Rispone will get all of Abraham’s votes in the runoff and there will not be minor candidates draining votes from Edwards.

Sabato and I both rate this a pure tossup. Black turnout will be the key for Edwards.

Louisiana politics could be a full graduate level course. The corruption and history is fascinating. Like the past 3 or 4 Commissioners of Insurance all went to jail. Guess which state has the highest insurance premiums in the nation.

West Louisianans believe they are Texans. Lafayette, Baton Rouge, and New Orleans are Democrat strong holds. Shreveport will go Democrat. I agree it will be close.
Edwards cleaned up a huge Bobby Jindal mess. Piyush has been missing in action ever since.