Joe Biden and his administration have committed impeachable offenses

Let me be very clear. Biden will not be impeached. Today Republicans are a minority party, even if they retake both the house and senate in November I doubt there will be the political will and there won’t be enough votes in the Senate…

And God Help this country as tragic as Biden’s presidency has been if Kommie Kamala were to move into the Oval Office.

That being said…Let’s all understand that Biden and Company have completely failed this country in their ridiculous handling of the southern border. Katie Pavlich has a good piece at Townhall.com where she lays it all out…“The first year of the Biden presidency brought record levels of illegal immigration into the United States, with numbers topping two million. The influx isn’t an overwhelming situation that the federal government and, more specifically, President Joe Biden can’t control. Instead, the crisis at the southern border has been fully embraced and deliberately made worse. For months, Americans have watched millions of people pour into the country as a result of President Biden’s open border policies.”

And she quotes the law…"It is a violation of federal law to aid and abet illegal immigration. This includes domestic transport, harboring, encouragement and more under the U.S. Code.

Our ICE agents have been turned into an official travel agency for illegals. “Immigration and Customs Enforcement’s (ICE) Enforcement and Removal Operations have been turned into an ‘unofficial travel coordination agency,’ and agents are made to coordinate travel for some illegal immigrants with criminal records, an ICE source told Fox News on Wednesday,” Fox News reported this week…Fox News reporter Bill Melugin caught the Biden Administration in the act of releasing thousands of single adult males into the United States, giving them bus and plane tickets to their desired destinations. Many of them have criminal records." Biden Has Committed an Impeachable Offense

From the New York Post…Headline “Migrants with criminal records among those being released in the US: ICE agent”

“Illegal immigrants with criminal records are being released into the US, an ICE agent told Fox News Thursday in a report that included new video of a busload of adult, male migrants getting dropped off at a Texas airport…The Immigration and Customs Enforcement agent, who’s involved in the migrant release operation, said it’s been going on discreetly since the spring, Fox News reported…The unidentified official said some of the migrants who’ve been released have criminal records for misdemeanors including assault, drunken driving, drug possession and illegal re-entry, correspondent Bill Melugin said.” Migrants with criminal records among those being released in the US: ICE agent

Sadly - I see nothing being done about this. Nothing…This administration will continue to lie, let these people into the country and fly them all over America in the middle of the night. They’ve got another year in power and most of the media is ignoring the severity of the crisis at the border. I’ve argued that Biden is doing irreparable harm to America…Once all these people get entrenched into America they aren’t leaving…And the illegal immigrant caucus in DC is in power for at least another year.

I hate to present the problem without a solution, but it is obvious the Biden administration doesn’t care about the law, doesn’t particularly care about the people at the border who are seeing their land and fields and ranches trampled over, fences cut…I heard a story yesterday of a farmer in the Yuma sector who had to destroy a perfectly good lettuce crop because it had been contaminated by people sleeping and pooping in his fields.

It’s ridiculous that so many people seem willing to tolerate this nonsense.

…and how many were infected with COVID and then shipped around the US to further spread this virus, potentially murdering innocent people while this Administration issues mask and vaccine mandates to American citizens that get overturned by the SCOTUS. Biden doesn’t need to be impeached, he needs to be charged and prosecuted for his criminal behavior…period.

…and how many were infected with COVID and then shipped around the US to further spread this virus, while this Administration issues mask and vaccine mandates to American citizens that get overturned by the SCOTUS. Biden doesn’t need to be impeached, he needs to be charged and prosecuted for his criminal behavior…period.

He and Fauci as well.

It is my sincere hope, that establishment politicians on both sides of the aisle but especially Rs, get removed from office and replaced by politicians who actually believe in and practice the rule of law. I hope they actually investigate and prosecute these offenses being committed.

I start this thread because this border disaster Biden has created is IMHO an under reported but serious tragedy in our country.

Even CNN is recognizing the Fentanyl crisis in America. " (CNN)US Customs and Border Protection reported a 1,066% increase in the amount of fentanyl seized in fiscal year 2021 in south Texas, the agency said this week in a press release.
Agents at eight ports from Brownsville to Del Rio seized 87,652 pounds of narcotics, including 588 pounds of fentanyl, a painkiller, CBP said in the release." Border agents reported a 1,066% increase in fentanyl seized in south Texas last year - CNN

And the cartels are making a massive amount of money. "Criminal cartels that are trafficking families, women, children and single adults over the southern border earned as much as $14 million a day in February, according to a report on Monday. “Trafficking is a multibillion-dollar industry,” former Tucson Border Patrol Chief Roy Villareal, who retired in December after 30 years with the agency told Fox News. “A lot of these vulnerable populations use their life savings. Some are essentially indentured servants and they’re working off this debt for a long period of time. In other cases, some of these migrants are asked to transport narcotics or some form of crime to work off a different part of their debt,” he said. The report said, according to smuggling fee revenues estimated by the Customs and Border Patrol, traffickers made a total of $411.5 million in February taking people from Mexico and Central American countries to the US border – which amounts to an average of $14.6 million for each day in February. US-Mexico border traffickers earned as much as $14M a day last month

No responsible leader or set of leaders would allow this to be done to his or her country.

Even CNN is recognizing the Fentanyl crisis in America.

…and there’s another virus from China. When will the world unite against this rogue nation instead of rewarding them with purchases of COVID tests, masks and increasing their trade deficit?

…and how many were infected with COVID and then shipped around the US to further spread this virus, potentially murdering innocent people while this Administration issues mask and vaccine mandates to American citizens that get overturned by the SCOTUS. Biden doesn’t need to be impeached, he needs to be charged and prosecuted for his criminal behavior…period.

I agree…And people like his fraud Homeland Security Secretary need to go with him.

U.S. Border Patrol Chief Raul Ortiz got into a tense back and forth with agents in Laredo, Texas, Friday, as Homeland Security Secretary Alejandro Mayorkas paid a visit…In video shared with Fox News by a Border Patrol source, Ortiz confirmed that “morale is at an all-time low.”…“I do think that we’re losing too many agents,” Ortiz said. “As an organization, we gotta start taking care of each other.” Border Patrol agents get into heated exchange with leadership during Mayorkas visit, leaked video shows | Fox News

They are destroying the morale of the heroes we trust to patrol that border…While overwhelming them because of the bad policies they’ve implemented.

You just detailed one of the many impeachable crimes of Joe Biden, his Administration and Congressional Democrats.

And you’re right that the current batch of Republicans don’t have the stomach or courage enough to do anything about it if they regain control of Congress. You might as well build a prison wall surrounding DC at this point because it’s nothing but a cesspool of criminality from elected officials and the bureaucracy.

It’s not only Americans being hurt by the insanity of Bidens open border policy he has created a global humanity crisis while enabling and making the Mexican cartels richer and more powerful. The USA is now complicit with the cartel coyotes in human and child trafficking. It’s a disgrace that the whole world can see.

No responsible leader or set of leaders would allow this to be done to his or her country.

Which is exactly why the puppet masters placed Biden in the oval office.

Even the hippies at the Cato institute recognize that.

Also… in what world is an increase in seizures of illicit drugs by over a 1000% seen as a failure?

Looks to me that they are being pretty good at seizing illicit drugs.

I had to leave the thread because I have horses and my neighbors have cattle. I was greated by illegal immigrant cows on my property this morning while caring for my horses.

You know…the Biden strategy. I guess if I really wanted to imitate Biden I would have sent my neighbors illegal immigrant cows to the other neighbors property.

That clown and the people around him are such a joke.

Also… in what world is an increase in seizures of illicit drugs by over a 1000% seen as a failure?

Looks to me that they are being pretty good at seizing illicit drugs.

If we didn’t have WIDE open borders, we would not be able to count how many drugs cross

“ Washington, D.C. – Since Joe Biden’s border crisis began, millions of illegal immigrants have been caught trying to cross the border. This sudden influx of illegal immigration has overwhelmed law enforcement and border towns.

The Biden Administration often releases these illegal immigrants without a notice to appear in court. Now, according to Axios, Biden is ending detention of undocumented families altogether.

But the number of illegal immigrants caught trying to cross the border only tells part of the story. Recent data show a startling spike in illegal border crossers who have evaded law enforcement. Over 273,000 illegal immigrants have evaded capture and crossed into the country since Joe Biden took office.” New Data Show Unprecedented Number of Illegal Immigrant ‘Gotaways’ - NRSC

We had a reasonably secure border prior to Biden…

I would like to know who is paying for the transportation and housing of the people released.

I would like to know where they are going and how this was determined.

No surprise. Republicans were talking about a revenge impeachment before Biden was even elected. 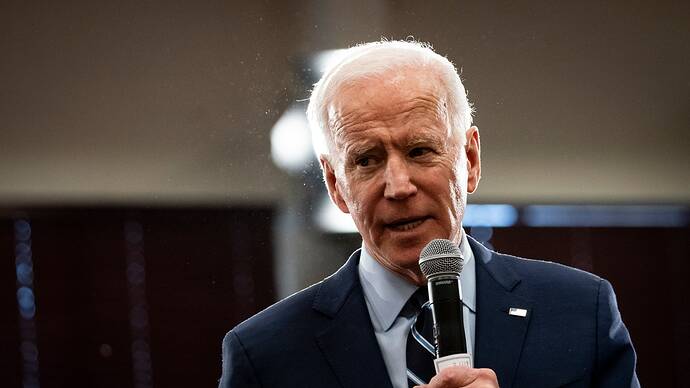 Presidential candidate Joe Biden still insists Republicans will start working with him once Trump is out of office.

No surprise. Republicans were talking about a revenge impeachment before Biden was even elected.

As laid out in the OP…

Biden and his cohorts have broken the law with their shabby handling of the southern border.

The level of incompetence, dishonesty, the lack of transparency, should warrant severe disciplinary action.

Biden and his cohorts have broken the law with their shabby handling of the southern border.

I’m unhappy with the Biden administration on several fronts, but Republicans should have kept their mouths shut about impeachment before he was even elected. Now it’s too easy for Democrats to argue that it’s political persecution, with quotes to back it up.

I’m unhappy with the Biden administration on several fronts, but Republicans should have kept their mouths shut about impeachment before he was even elected. Now it’s too easy for Democrats to argue that it’s political persecution, with quotes to back it up.

Biden is breaking the law with his administration’s disastrous handling of a border crisis he created.

Will they ignore the misguided quotes from Republicans in 2020 about impeaching Biden before the election even took place? We’ll see.