I really didn’t want to put this in politics because to me the end of the ISIS caliphate is good regardless of who is the president. I am looking at the map and it appears the last pocket was in Baghuz in Deir-ez-ezzor along the Euphrates river in Syria and was taken today by the coalition backed SDF.

This is were the last part of the caliphate was 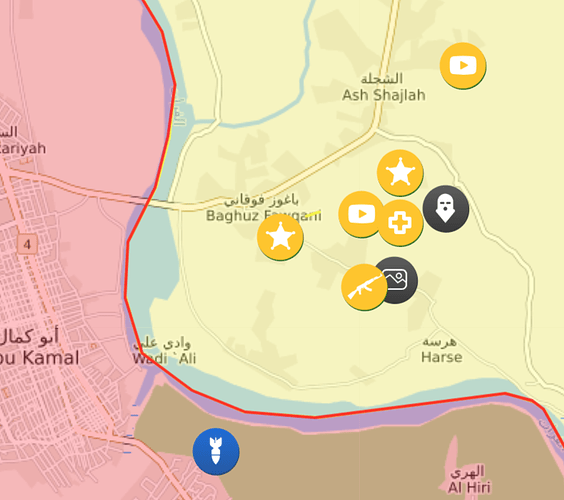 I am not saying in anyway that ISIS is defeated as a terrorist organization, just that it looks like they officially lost their last bit of the 1% of Caliphate they controlled. On a side note one of the three British school girls who went to Syria in 2014 was found in a refugee camp alive.

I would like to see our troops come home now, regardless of who is President. The mission even under Obama was to remove the caliphate, that is mission accomplished. Imho ISIS will tend to be a nuisance for a long time, just like Al-Qaeda, Boko Haram, and Al Shaabab but they just lost the last piece of their Caliphate . No news on were Al-Baghdadi is or if he is still alive.

This is good news

Good news, but pulling out would be utterly stupid and irresponsible. At a minimum we need to keep enough of a force in place to keep Turkey from wiping out he Kurds and to keep a QRF capability as well as on the ground intel capability with an eye on Assad, The Russians, and the Iranians.

Leaving a vacuum for them to operate in would be a disastrous if not more so in the future than Obama’s failure to keep enough forced in the area to keep ISIS from becoming what it was at it’s peak.

How long would we have to keep troops in Syria to protect the Kurds? I do have sympathy for them but that wasn’t what the initial goal was.

Unconfirmed, but its also being reported that ISIL took control of a bunch of villages in Suwayda today.

We’ve had troops embedded with and aiding the Kurds since Saddam was removed. They’ve been the most effective fighting force in the region since we pulled our combat units out and have been our steadfast ally now for a couple of decades in all of our operations in the area.

Turkey has changed dramatically over that period to being much more of an Islamist state and has certainly proven to be a less than reliable ally to the US since prior to OIF.

Now they are completely hostile to the Kurds and hell bent on wiping out large portions of them and to abandon such a steadfast ally would be next to criminal.

We’ve ■■■■ on the Kurds time after time since WWI and yet they have always come to the aid of the allies on the promise that eventually they will have their own Sovereign Kurdish State again.

How long should we stay? Well, they’ve been one of our best Allies in the region for a hundred years and tens of thousands of them have paid the price for doing so.

I’d say some sort of stabilizing force needs to remain as long as the threats remain, meaning the threats both to the Kurds and to a vacuum of power being left there resulting in yet another terrorist state or terrorist enabling state forming in the wake of our leaving.

Cause Donald Trump has guts! and is President, is why they’ve
been defeated!!

I can’t ever get tired of winning Mr. President.

Cause Donald Trump has guts! and is President, is why they’ve
been defeated!!

I can’t ever get tired of winning Mr. President.
https://www.youtube.com/watch?v=daOH-pTd_nk

Simply out of curiosity, why was ISIL falling back on every front, SDF five kilometers from Raqqa and half of Mosul already taken before Trump took office if we needed Trump’s “guts” to defeated ISIL? Trump continued the Obama anti ISIL campaign and he deserves credit for that, but nothing else changed. Except for abandoning the Kurds. Thats all Trump.

forever the Kurd will always be threaten in Syria/Turkey until Assad is gone. The only safe place for them in Iraq which is because America protect them.

Trump is hell bent on removing Trump from Syria similar to Obama in Iraq.

He was but unlike Obama Trump seems to have listed to wiser heads at the Pentagon.

The Kurds have a lot more to fear from the Turks than from Assad. Assad is to worried about just holding onto power to worry about the Kurds who in no way threaten his power.

the best option would be to work with Russia to create a Kurdish autonomous region within Syria similar to that of Iraq. Turky is another story we need to remove them from NATO they are a massive risk we need to find another place to be our entry point into the middle east.

once the civil war in Syria is over Assad will push to remove the Kurd best to solve that before that happen and when Assad is at a disadvantage.

It is important to note that Turkey/Erdogan works fine with KRG. But that really just tells you how bad Barzani is. It’s PYD/YPG thats gonna get screwed, but thats the core of SDF.

How so? He never made any attempt to push them out prior to the Civil War. Syria has had a large Kurdish population since before the borders were redrawn in the early 1900’s.

Because they have become militarized, self-governing which isn’t good for political dictatorship (Ba’ath) which doesn’t have support of the massive Sunni population.

The Syrian Kurd have offical rebelled from the Syrian government.

The Democratic Federation of Northern Syria (DFNS) or since September 2018, the Autonomous Administration of North and East Syria (NES), is a de facto autonomous region in northeastern Syria. It consists of self-governing sub-regions in the areas of Afrin, Jazira, Euphrates, Raqqa, Tabqa, Manbij and Deir Ez-Zor. The region gained its de facto autonomy in 2012 as part of the ongoing Rojava conflict and the wider Syrian Civil War. While entertaining some foreign relations, the region is no The su...

That changes the equation somewhat but as desperate as Assad is to maintain power I don’t see him going after the Kurds. If he does he knows then that we’ll have to intervene.

American support would be the only thing stopping him, which is why I would support the West moving to recognize them as a legitimate group on the world stage.

Which again is why I have said we need to keep a stabilizing force in the area until that threat is gone.