Is There Peace in Afghanistan?

Trump negotiated a peace treaty… with one side.

The results were what anyone with common sense would have expected.

Much like Trump’s abandonment of the Kurds and his promise to step in if the Turks did “bad things.” Well, they did, and we “stepped in” after they finished doing their bad things… One-sided peace agreements do not bring about peace

The Taliban must view the peace agreement as an American white flag of surrender that abandons Afghanistan's government. 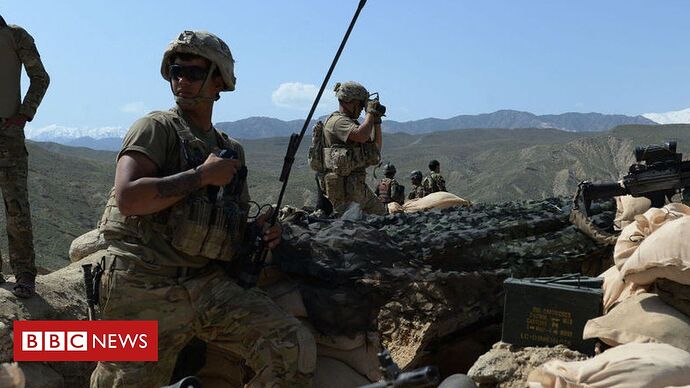 The US president says 5,000 troops will leave Afghanistan by May and he will meet Taliban leaders.

There is a disturbing pattern to the Trump administration’s approach to peace talks. In both the Doha agreement with the Taliban, and its “deal of the century” to bring about Middle East peace, the administration has dealt with only one of the affected parties. In that respect, it differs from all other accords in which the United States has negotiated successfully. These have ranged from Theodore Roosevelt’s crucial role in achieving the 1905 Treaty of Portsmouth that ended the Russo-Japanese War, to Richard Holbrooke’s efforts that culminated in the 1995 Dayton Accords that ended the Bosnian War, to George Mitchell’s 1998 Good Friday Agreement that included not only the British and Irish governments, but no fewer than eight Northern Ireland parties and groups.

We negotiated a sham deal to get us the **** out of Vietnam, knowing what the final outcome would be.

We should never have been in Afghanistan (or Vietnam) in the first place.

There has never been peace in Afghanistan.

@Safiel doesn’t know what he’s talking about, but I agree with him. We should have left in '03.

I would expect there is little appetite to stay in Afghanistan even among the most fervent of the presidents haters. We have been there near 20 years now, way past time to go.

Y’all don’t even know who the “Taliban” are anymore.

Interesting…and you’re probably right. But again I really didn’t know them before so there is that.

The Afghan gov’t has been involved in every aspect of the negotiations from the start.

Turkey again? What were we supposed to do exactly, leave our own troops in harms way?

When it became obvious what the Turks were up to we stepped back in and negotiated with the Turks to bring it to an end and they did so.

The Kurds were not abandoned and they were not wiped out and they continue working right alongside our forces running joint operations as allies.

I didn’t like our pullback either or that the Turks forced it but it beat taking tens, hundreds or more American Casualties and blowing up our alliance with Turkey

That alliance is the only thing that keeps the Turks from a massive ethnic cleansing/genocide of the Kurds so it’s definitely in everyone’s best interests at least for now to maintain it until we’re ready to full back an independent Kurdistan and willing to put US bases inside it’s borders to make it clear our support goes further than the paper it’s written on.

Taliban will topple the government in a decade

No. No there is not. And there never will be.

Our men fought honorably there. Thousands of American, British, and other NATO troops tried to do the right thing. Many brave young men and women lost their lives there.

They are among the most noble and honorable soldiers who have ever went to war. And we owe them the utmost respect for the physical and mental sacrifices that they made to help both the various peoples of Afghanistan and in the fight against international terrorism.

In the end, I’m not sure if the West’s ultimate objective could ever be achieved. But I have the utmost respect and admiration for the men and women who went there and tried. Including a personal friend who did two tours there while serving in the United States Marine Corps.

When you’re all done trying to save the world of a way of life that has existed for thousands of years, understand that it’s a total waste of time, our resources and the lives of our young men. Stop it already and bring our men home.