Is India the biggest remaining road block in China's path toward world domination?

No, no, Hindutva is just about circuit boards and vaccine licenses…

In three thousand years, has China ever been interested in world domination? They had multiple spans of literal centuries where they could have knocked off every other major world power without even straining themselves.

They’ve never cared much beyond expanding just enough to protect the Middle Kingdom.

Prime Minster Modi and his ruling party can be removed in the next election.

Is that true for President Xi and his ruling party?

Modi and his ruling party can be removed in the next election.

They are wildly popular have been the outright ruling party for seven years and part of the ruling coalition for more than twenty. So that’s a fantasy.

Modi instigates pogroms when he looks to lose even list elections.

These are the same folks who look at Iran and see a rival, so…

How is polling for President Xi and his ruling party?

They have been “re-elected” for 70 years now with virtually no opposition.

Xi is a right New Confucian bastard. No doubt about it. Sucks to be ruled by Beijing.

No reason to embrace the self-immolative madness of the Hindutva monster.

Maybe the US should’ve cut ties with the Kuomingtang fascists before turning on the inevitable victors in the brothers’ war.

The US had to choose between Hitler and Stalin in World War II. Decisions frequently end up as choosing the lesser of two evils.

Modi versus Xi is a no-brainer in my opinion.

There are no ‘had to’ choices in the Great Game. Only in hindsight does path dependence = predestination.

These are the same folks who look at Iran and see a rival, so…

Even in the Mao era, they’ve only engaged in border conflicts and that includes the Korean War where they told us repeatedly they would attack if we crossed the Yalu. Some dustups with Russia and India, some beef in the Tawain Strait. And since they invaded Vietnam in ‘79 and got wrecked, their army spends most of its time making appliances.

I think that the future of China and North Korea was pretty much assured when the Soviet Union declared war on Japan at the end of World War II.

They rolled over Japanese forces and occupied Manchuria and the northern half of Korea in accordance with the Yalta agreement.

Except for by the span of their history brief interregnums like the Warring States, the Three Kingdoms and their domination by European powers, the Middle Kingdom has always preferred to simply surround themselves with economic vassal states as a buffer against invasion rather than outright annex territory.

Which is why the New Silk Road economic stuff is totally in line with what they’ve been doing since the Han Dynasty.

China has bases in 4 countries. India has 6. @Bill.in.PA , care to know how many countries we have military bases in?

This frothing about China “world domination” is mindless.

As China buddies up to Russia, we cast our gaze to India…pretty simple really.

Gotta give China credit for hubris.

First they demand to inspect US military bases for Covid origin. Now they are blaming India and Pakistan.

They add, “From May to June 2019, the second-longest recorded heat-wave had rampaged in northern-central India and Pakistan, which created a serious water crisis in this region. The water shortage made wild animals, such as monkeys, engage in the dea…

In what has been a fresh development in the India-China rivalry and the Covid-19 pandemic, a team from China’s top science institution, Chinese Academy of Sciences in a paper argues that SARS-CoV-2 likely originated in India in summer of 2019.

As China buddies up to Russia, we cast our gaze to India…pretty simple really.

Hmm i wonder why Russia cozied up to China. It’s like we left a void that China can fill.

We spent as much on our military as the next 26 nations combined.

We berate our allies for not spending enough when we set the game up in such a way so they wouldn’t do it.

Then we are told even though we ordered the postwar world to our liking we are in grave danger so let’s make friends with monsters instead of our allies because our allies are too “Lib”.

The danger in the coming years is not that China will dominate the world. The danger is that no one can.

Yes, as is the case of most great powers, China believes that it is the center of the world and should be surrounded by vassal states.

The difference between now and several centuries ago is that known world for the Middle Kingdom has greatly expanded. The speech from the Chinese professor explain how China has cleverly exploited the gullibility of Americans to allow China to corrupt the US elite to create a kind of vassal state under control of the Chinese Communist Party:

I am going to throw out something maybe a little explosive here. It’s just because we have people at the top. At the top of America’s core inner circle of power and influence. We have our old friends.

They are doing similar things in the rest of the world. For example here are reports from Africa: 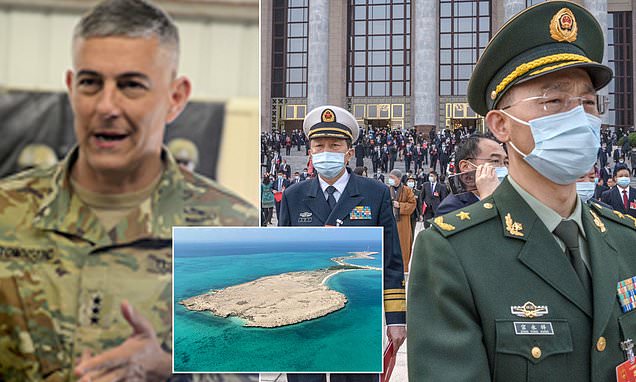 The top U.S general for Africa is warning that a growing threat from China may come not just from the waters of the Pacific. Caracas [Venezuela], June 3 (ANI): Although the Venezuelan Navy has not been a top concern for the US Department of Defense, reports have emerged that China is supplying Venezuela with some rather powerful weapons that could shift the balance of...