judging by the voter analysys on fnc, i’d have to say i’m a bit surprised,

They’re vamping. Something’s broken in Iowa and everyone is filling time.

its a dem caucus… of course somethings broken.

More votes in the trunk of the car. Track the race results, the candidate standings, and the important calendar dates for the 2020 Presidential Election primaries.

Is it a ploy by the Democrats to ensure that Fox News can’t talk about the greatness of D Trump?

Or a divide by zero crash

Can anyone say fiasco? 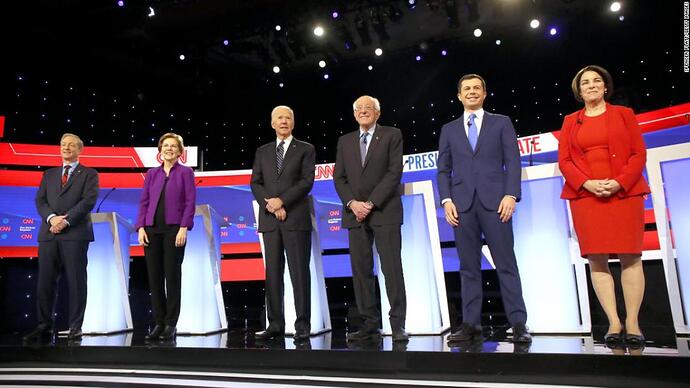 Democratic officials say they're going over the paper trail of results from the caucuses after finding "inconsistencies" in the reporting. Follow here for live updates and results.

He said that they first tried to use an app, but that didn’t work. They then turned to a hotline.

“We’ve been recommended to call in to the hotline, and the hotline has not been responsive,” he said.

In that moment, someone on the other end of the hotline picked up.

“This is a real coincidence, Wolf. I just got off hold, just now, so I’ve got to get off the phone to report the results,” he told CNN. He stayed on CNN’s air as he began to report his county’s results.

That’s when the hotline went dead.

Will any of the campaigns be able to trust the numbers reported tonight??

On what basis would you doubt the results when they are released?

I wrote a function back in the day in one of our common assemblies for our junior developers.

had a custom exception thrown in the divisor was zero, would add “you’re the weakest link” to the exception message.

This is even less than a storm in a tea cup.

“Drama began unfolding late Monday, as the night wound on without any official vote figures released. In one precinct, Sanders reportedly won by 20 points, but received only one delegate – along with four other candidates. Sanders supporters called the situation a “joke” and stormed out, according to The Washington Examiner’s Philip Klein.”

Tonight’s results brought to you by joe biden’s inner monologue.

I wrote a function back in the day in one of our common assemblies for our junior developers.

had a custom exception thrown in the divisor was zero, would add “you’re the weakest link” to the exception message.

No problem. Try catch and swallow the exception without logging it.

On what basis would you doubt the results when they are released?

App not working
Precienct reporters calling hotline to report results being hung up on
Long unprecedented delay in reporting number
And well it’s Democrats doing the voting and counting.

In order of your points"

actually it shows the complete opposite to what you are implying;

I don’t believe it is unprecedented. I believe there was about a 14 day delay before the Republicans in 2012 before Santorum was declared the winner;

non sequitur of the highest order.

Intriguing you are watching CNN rather than Fox News.

I’m going with Russia on this one, it’s an easy mistake in the Russian language to confuse a caucus with the Caucasus region in which they Russia has been in out of war with for the longest time. They were probably wandering why these democrats were holding and election in the Caucasus region and were trying to stop it, hence the bot attack.

“We found inconsistencies in the reporting of three sets of results,”

“For the first time ever, the IDP has previously said it will report three sets of results at the end of the state’s first-in-the-nation caucuses:”

doesn’t that mean they found “inconsistencies” in all of the results?

@Ben_Natuf could you please provide a precis of the Republican’s 2012 primary in Iowa?

With respect to your question it would seem to me that they are doing due diligence in ensuring that the results they provide are accurate given the import. That is the reason why I asked about the Republican 2012 Iowa primary. Did the misreporting of a Romney win rather than a Santorum win in the 2012 have an impact on Santorum’s campaign going forward from that primary?

I don’t believe it is unprecedented. I believe there was about a 14 day delay before the Republicans in 2012 before Santorum was declared the winner;

Did they have an APP for reporting instant results back then?
Did the Republicans have a hotline they kept haning up on their people calling in results?

Intriguing you are watching CNN rather than Fox News.

CNN is the mouthpiece of the Dem Party. Of course if there are issues I’m going to watch how they spin it.