Today should be the first day of the 2020 season of IndyCar racing, with on-track activity in the Road to Indy, but the pandemic of the Coronavirus is going to affect the race weekend. What we are hearing is that there WILL BE a… 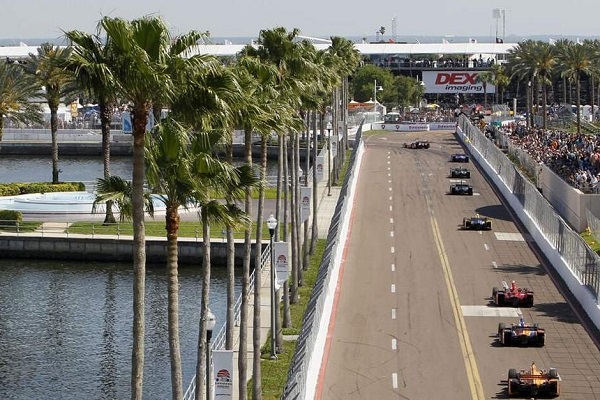 .
.
…But it will be run in front of empty stands, as no one but drivers, crew members, media and necessary race personnel will be permitted inside the street course. No one without a hard card (an official entry I.D.) will be admitted to the track, so that means no race fans and no autograph sessions. The race SHOULD BE broadcast on NBC-SN at the scheduled time on Sunday. If that changes we will let you know.

At this time the weekend has been condensed down to support activities on Friday, practice and qualifying for the IndyCars on Saturday and the race on Sunday. All three Road to Indy series will run their two races each, with only one qualifying session to cover both races - not the usual, but necessary in the condensed schedule.

At this time it looks like there will be no practice sessions for the support series running, but for the three Road to Indy series the good news is they are fresh off the Spring Training testing at Homestead-Miami, last weekend, so this won’t hurt as much.
.
.
.
The track remains the same and it’s one of the better temporary street courses on the schedule, relatively smooth and fast at 1.8-miles, the 14-turn (5 lefts, 9 rights) circuit incorporates streets of downtown St. Petersburg and a runway of the Albert Whitted Airport. That runway is the longest straight and very wide but it funnels down into a very sharp right-hander, followed by a quick left-hander that catch out a lot of drivers. 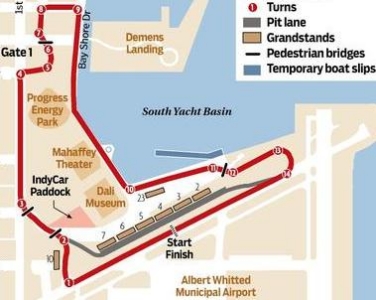 .
.
.
The racing will be almost constant on the condensed schedule because it was very busy on the original schedule, with no less than 13 races. If that holds up they will be:

…and of course the IndyCar race will be on Sunday

First off, SRO GT4 America, SRO TCR America (both formerly Pirelli World Challenge series) and IMSA Porsche Cup are all splendid production car-based racing series that regularly produce talents who end up in the highest echelons of SportsCar racing, but no IndyCar guys will be competing in them this weekend, so we will wish them safe and happy racing and concentrate on all the open-wheel stuff, where the IndyCar drivers are.

.
USF2000 - On the Road to Indy ladder system that trains IndyCar series drivers, this is typically the first series that young aspirants will come to. The cars are often the first winged and slick-tired formula cars they will try. The carbon-fiber Tatuus USF-17 is the chassis, meeting current FIA F4 safety standards, but with an upgraded front bulkhead structure for the oval racing we do here. It’s powered by an Elite Engines 2.0 liter MZR normally-aspirated 4-cylinder, developing 175 horsepower with Cosworth engine management. The gearbox is a Sadev SL75 six-speed sequential transmission operated by paddle-shifters on the Cosworth steering wheel. Brakes are four-pot calipers by PFC and are driver-adjustable for bias. The suspensions front and rear are fully adjustable with 6 different spring rates available. Tires - regulars and wets - are by Cooper.

The fields for USF2000 are usually large, with lots of young drivers from all over the world who have proven themselves in usually either karts or in F1600 cars, and are ready to make the leap into winged formula cars. Some of them will be struggling to find speed while others will already be truly excellent. 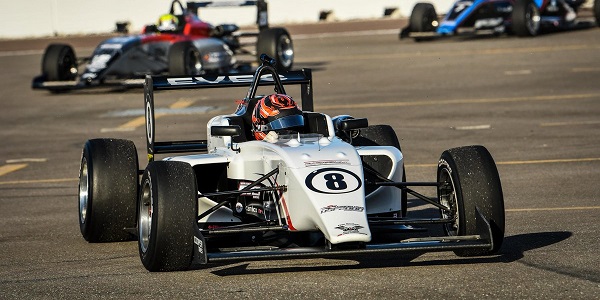 .
.
.
Indy Pro 2000 - This is the middle rung series on the Road to Indy ladder. The car is the Tatuus PM-18, which is an upgrade of the Tatuus USF-17 chassis, making it possible to buy one chassis and race in two different series, just by changing the add-ons. The engine is the 2.0-liter MZR-PM-18A by Elite Engines with 275 horsepower. Also controlled by a Cosworth management system, this normally-aspirated 4 cylinder is torquey and loud, making it unmistakable and thrilling on the racetrack. The gearbox is a somewhat bigger Sadev SL82 six-speed sequential transmission operated by paddle-shifters. Brakes and suspensions of the PM-18 are similar to the Tatuus USF-17. Tires - regulars and wets - are by Cooper, but are substantially larger than on the USF-17. Similarly, the wings on the PM-18 are larger and the car produces significantly more downforce than the USF-17. This is a perfect car to transition to more power and more grip.

The fields in Indy Pro 2000 are somewhat smaller than USF2000, but the talent level generally is much higher across the board. Most of the drivers here have already developed good racecraft in lesser series, so the competition for the top is far greater. More series drivers can win on any race weekend. 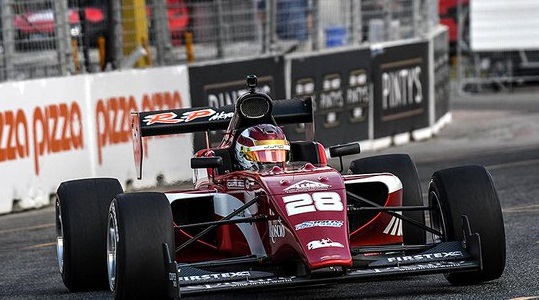 .
.
.
Indy Lights - The top rung of the ladder, Indy Lights cars are much closer to full-size IndyCars in speed, in acceleration feel and especially in handling characteristics. The chassis is the Dallara IL-15 while the engines are by AER. While the same displacement at 2.0 liters, these 4-cylinders are turbo-charged and produce 450 horsepower, while having “Push-to-Pass” available - just like on the big cars - giving the car a limited burst of 50 additional horsepower under certain race conditions. The IL-15 uses a bigger gearbox by Ricardo, bigger brakes, bigger Cooper tires and bigger suspensions and wings than the two lesser cars. It is considered an excellent training ground to make the transition to full-size IndyCars.

That is born out by the level of driver talent in Indy Lights. While the fields are the smallest of the three series, they are generally ready to drive IndyCars, and competitively, too. The two most recent Champions and the two most recent Vice-Champions from the series WILL ALL BE driving IndyCars in 2020. In fact, about half the field in IndyCars are former Indy Lights Champions or competitors.

.
The Champion of the series last year was Oliver Askew - now an IndyCar driver. 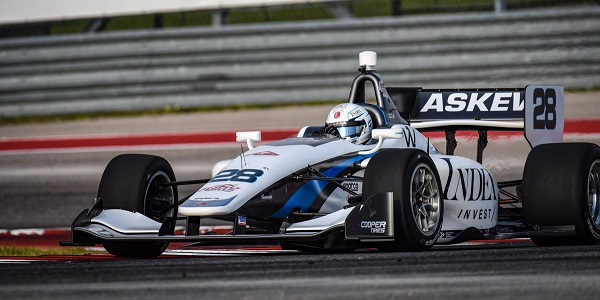 .
.
.
We await a revised weekend schedule from the series and from the venue. Hopefully, by tonight we will have a better idea of who will be on track and when for the rest of the weekend.

.
Well…The party’s over. In an abundance of caution IndyCar is suspending all racing for the weekend and for the foreseeable future - the first four races of the season, at least. Here is their statement, issued moments ago:

After careful consideration, including regular communication with our event promoters, health officials, and the city administrations in our respective race markets regarding COVID-19, we have made the decision to cancel all NTT INDYCAR Series events through April. This begins with the Firestone Grand Prix of St. Petersburg which was to begin today and run through Sunday, March 15 and continues through the AutoNation INDYCAR Challenge at Circuit of the Americas in Austin, Texas which was to take place April 24-26. Although we are disappointed to delay the start to this INDYCAR season and will miss our incredible fans who support us each year in St. Petersburg, Birmingham, Long Beach, and Austin, the safety of our fans, participants, staff, partners, and media will always remain our top priority. We will continue to coordinate with public health experts and government officials as we determine the appropriate plans for resuming our schedule."

We are going to present all three sessions, just because of what they say about the current state in each series, but this is the last of the weekend driving.

.
The first and only appearance of USF2000 cars this weekend at St. Petersburg…

.
…was also the first on-track activity of the day, as the little guys put in their weekend practice in anticipation of qualifying and racing, later today. That is not to be, however, so this is the only glimpse of what might have been.

.
Here was the order of speed for the USF2000 P-1 session, with times for the TOP FIVE: [R] denotes rookie 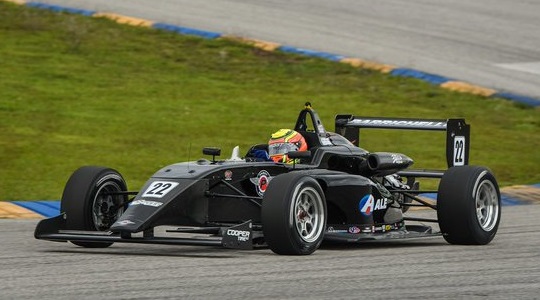 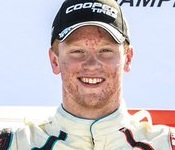 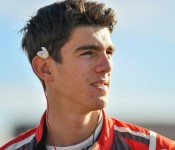 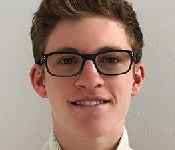 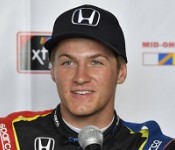 .
Eduardo Barrichello - taking up where he left off, last week 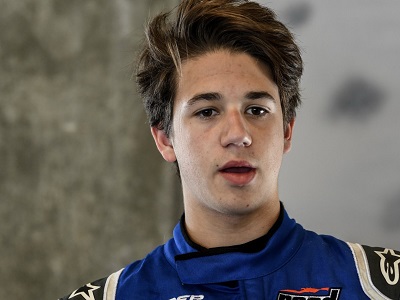 .
Indy Pro 2000 puts in their one and only appearance of the weekend…

.
Following the kids from USF2000 the next series on track were the middle-rung drivers of Indy Pro 2000, giving us a few surprises.

.
Here was the order of speed for the Indy Pro 2000 P-1 session, with times for the TOP FIVE: [R] denotes rookie 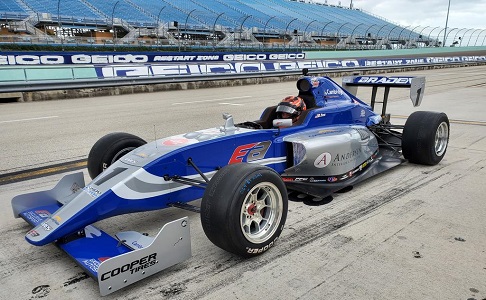 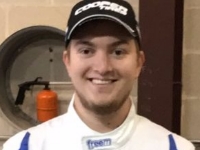 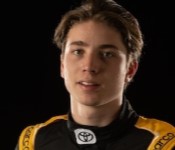 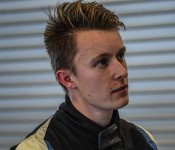 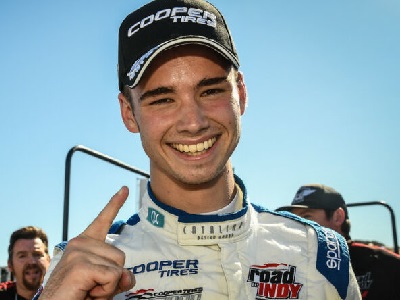 .
The Indy Lights put in their one and only practice session of the weekend…

.
…and possibly for many months to come. We did get a big surprise out of them, anyway, to give us all something to ponder.

.
Here was the order of the speed for the Indy Lights P-1 session, with times for the TOP FIVE: [R] denotes rookie 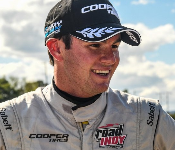 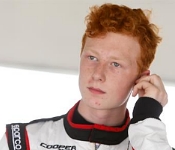 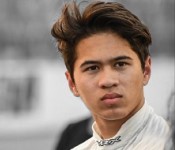 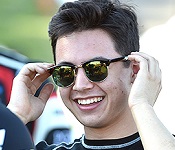 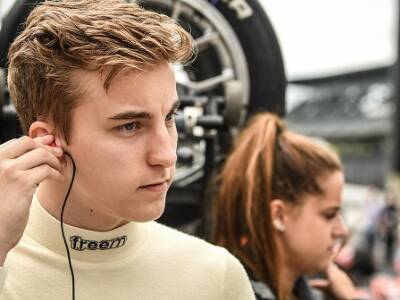