I just want to pass this along. I wonder how this will go over. It’ll be interesting to see. She doesn’t pull any punches: 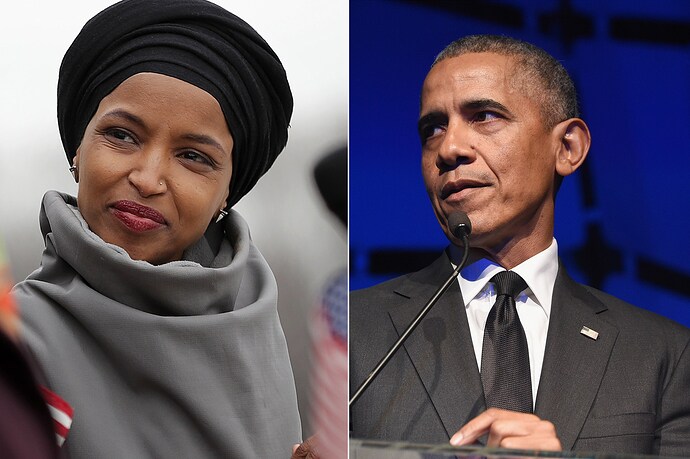 Ilhan Omar: Obama’s a ‘pretty face’ who got ‘away with murder’

Minnesota Rep. Ilhan Omar ripped former President Barack Obama in an interview published Friday, belittling his “pretty face” and saying his agenda of hope and change was an illusion. She cited the…

No comment is an invitation to have the thread deleted.

You know it is okay for those in the same party to disagree with members of their party, some would even say it’s healthy.

What is it that you would like to discuss?

These freshman congresswoman really got people in a tizzy!

These freshman congresswoman really got people in a tizzy!

These congresswoman? Yeah, they’re something else. I wonder how much longer Pelosi can protect her.

Just because some Republicans eat their own who dare criticize Trunp doesn’t necessarily mean the same will happen here.

Maybe so called conservatives will start to like her?

A Lefty Democrat criticizing a Centrist Democrat. Sounds healthy to me.

Maybe so called conservatives will start to like her?

I see she’s liked by at least one prominent Democrat.

Duke is a Trumpist. Hes yours now bub.

Isn’t that the same democrat that liked Trump?

ETA: I need to get faster or read further before I post.

Go for it. Start your own thread.

I dont think you understood the meaning of that post.

This is your thread. What perspective did you seek to discuss?

I suspect her color was less a motive for the thread than her being a democrat publicly ‘attacking’ Obama.