How much longer are we going to pretend Biden is President?

The man isn’t competent enough to do the most basic of activities without the use of a cue card or someone to assist him. It’s obvious he is incapable of functioning on an intellectual level so exactly who is calling the shots behind the scenes? Who is running (into the ground) this country? 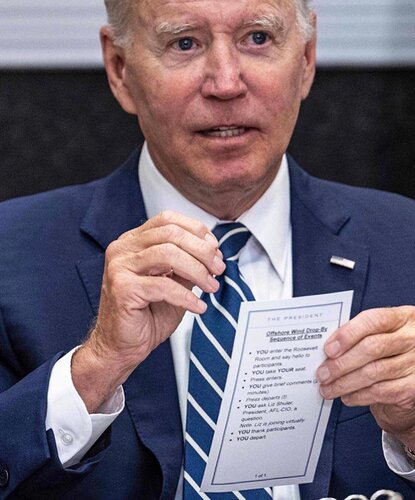 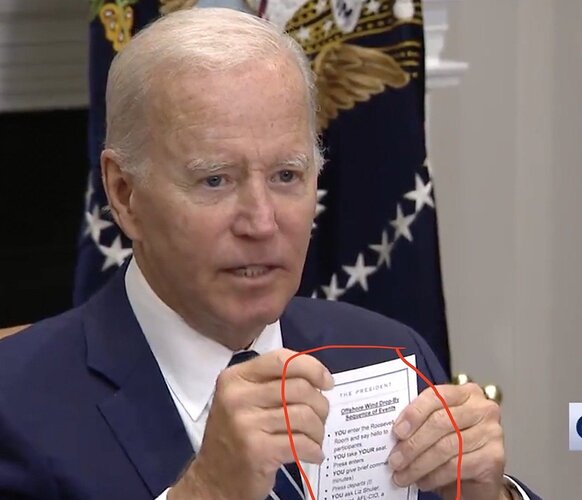 UNBELIEVABLE! Look At This Piece Of Paper Biden Is Holding With Instructions...

As Joe Biden met with wind industry executives at the White House on Thursday, the gaffe-prone illegitimate commander-in-chief obliviously held his cheat sheet backwards. The notecard showcased to the world step-by-step guidance prepared by Biden’s... 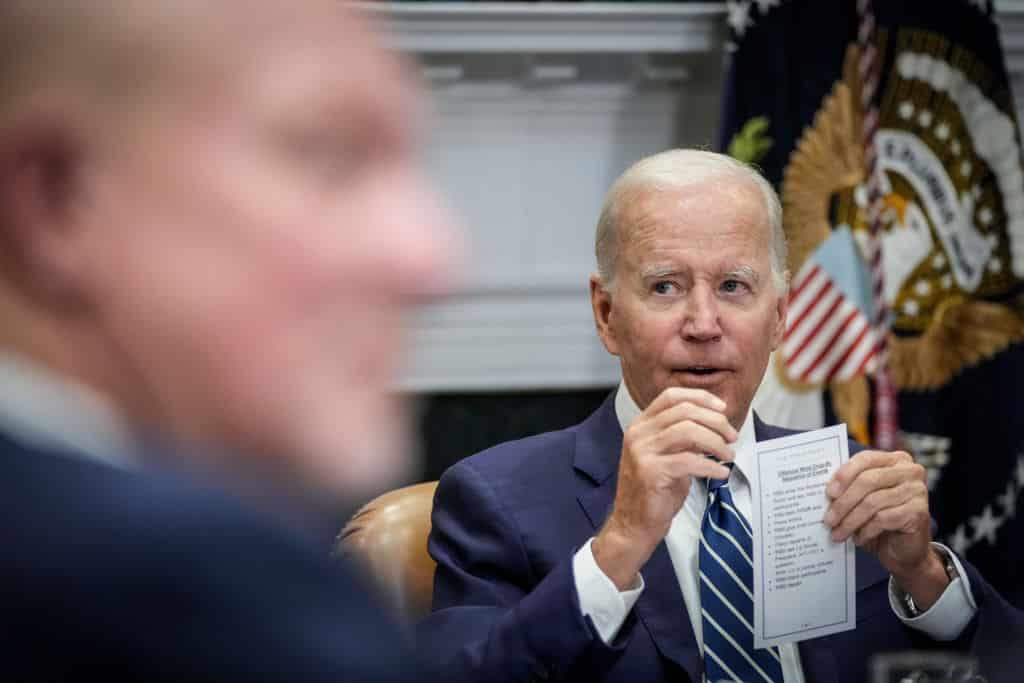 Well, this will do very little to stifle talk of a cognitive decline. During Thursday's meeting regarding Federal-State offshore wind partnerships (yeah, that's a real Biden admin priority), President Joe Biden was caught with one of the most...

Hopefully, for the next election, we can break the "anyone but "cycle and elect someone competent.

The man needs a cheat-sheet to tell him to sit down, who to take a question from and when to get up and leave. If you think that is normal behavior for the leader of the free world, then…well…I don’t know what to tell you.

Did you notice where Brandon’s handlers kept emphasizing the word “YOU” on his cheat sheet? Observing Brandon and trying to grasp that he’s POTUS…and witnessing the absolute messes he is creating at home and around the world, the only thing I find more disillusioning is that supposedly, there’s 81 million Brandonites among “we”.

Maybe that is Biden’s new pronoun; “YOU.”

Hey, if this turns out to be some bull ■■■■ Photoshop thing are y’all gonna admit you were wrong?

Hey, if this turns out to be some bull ■■■■ Photoshop thing are y’all gonna admit you were wrong?

Has the White House denied it?

Well, the article is on several different news sites, including Hannity’s You could ask him.

However, I’m pretty sure you won’t find it on CNN.

Hopefully, for the next election, we can break the "anyone but "cycle and elect someone competent.

We had an extremely competent DC outsider previous President who was politically incorrect who worked for the people and the country rather than pander to the DC filthy Swamp and I hope he makes a ultra MAGA return. JMO

Not just your opinion, also that of millions of others.

the only thing I find more disillusioning is that supposedly, there’s 81 million Brandonites among “we”.

I find it unbelievable myself but if true then sadly the countries electorate wants the country to die and with Biden the demise of the nation will be sooner than later!

Sure will you admit he is obviously not all there if they have tell him to say hello and to sit. Sounds more like a trained dog.

Sure, I’ll suck it up and agree he may be on the decline. And will you admit that a guy who won’t accept the fact he lost an election may not exactly be all there either?

That is how you instruct kids in kindergarten.

I wouldn’t say he wasn’t all there but definitely in denial and his ego is definitely getting the best of him.

Since most news report is now showing it including liberal reports are you ready to admit it. 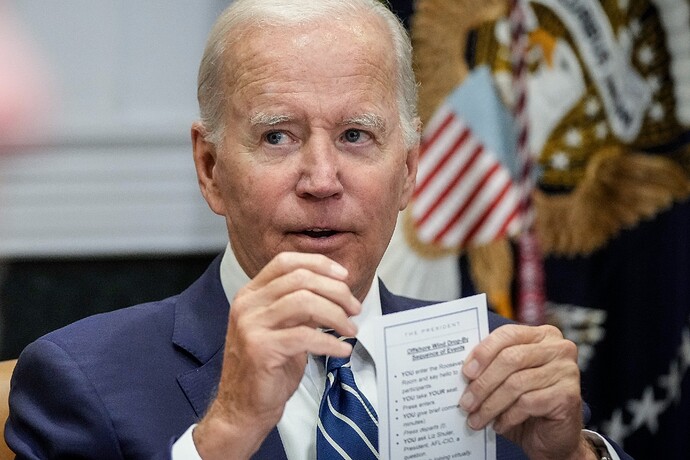 President Joe Biden has faced ridicule on social media after revealing a comically detailed cheat sheet during a meeting.

Many foreign ones also.

He only lost the election in your mind. In the mind of millions that have bothered to look at the evidence, then he is 100% correct that the election was stolen. No one should suck it up and accept that.

Now, back to the subject of the thread, the man that you now admit is “on the decline” has the nuclear button. Who would tell him when to push it? Think about that one for a while.

Sorry, but he lost.