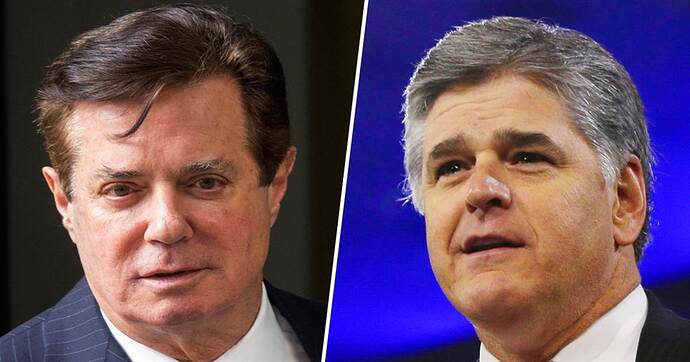 "The media is trying to split me with DT and family by lies and untruths," Manafort wrote to Hannity in August 2017. "It is such a dirty game."

The text exchanges between Hannity and Manafort show deep coordination, and effort to spin the Manafort trials.

As a pundit, Sean is under no obligation to disclose his relationships with the subjects of his show, but I was wondering what Fox thinks of this.

Let there be no doubt - Sean Hannity is working as a spokesperson for Manafort, and the Administration. The texts show his programing was designed to discredit the prosecution of the felon, Manafort, and to cast aspersions on the DOJ’s efforts to prosecute. Is that what Fox is paying him for?

The fascinating thing of course is, this brings in ratings! So, I guess Fox doesn’t care?

I find it fascinating. We have created a media market in which this stuff is possible…you can coordinate media messaging with a man on trial, and weave it into your programing in such a way that it doesn’t really matter…you can in fact serve two masters - (Manafort/Trump and Ratings).

It reminds me of the NRA TV in a way…

Anyway, I hope we can discuss this without running afoul of the ToS. Obviously this is a big story. Just as obviously, Hannity is our host on this forum, so discussions must be kept respectful of that fact.

11 posts were merged into an existing topic: A serious discussion thread on the the comments made last night between our host and the president

GWH closed June 28, 2019, 2:21pm #3
A serious discussion thread on the the comments made last night between our host and the president