Georgia's voting machines hacked by anybody who wants to, no one cares

Scrap them all and go back to paper.

Too much money in the electronic machines for that to happen now. 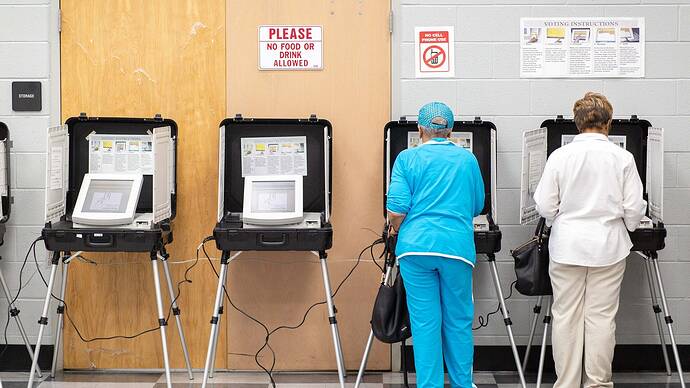 The practice of democracy begins with casting votes, and the integrity of democracy depends on the inclusivity of the franchise and the accurate recording of its will.

"In the past decade, Election Systems & Software (E.S. & S.), the largest manufacturer of voting machines in the country, has routinely wined and dined a select group of state-election brass, which the company called an “advisory board,” offering them airfare on trips to places like Las Vegas and New York, upscale-hotel accommodations, and tickets to live events.

Earlier this month, Georgia’s Secure, Accessible & Fair Elections Commission voted to recommend that the state replace its touch-screen voting machines with newer, similarly vulnerable machines, which could be produced by E.S. & S. at an estimated cost of a hundred million dollars. In doing so, the panel rejected the advice of computer scientists and election-integrity advocates, who consider hand-marked ballots to be the “most reliable record of voter intent,” and also the National Academies of Sciences, Engineering, and Medicine, which recommended that all states adopt paper ballots and conduct post-election audits.

The influence-peddling that has beset Georgia’s voting-system procurement began years earlier, in 2002, when the legislature eliminated a requirement that the state’s voting machines produce an independent audit trail of each vote cast. That same year, the secretary of state, Cathy Cox, signed a fifty-four-million-dollar contract with the election-machine vender Diebold. The lobbyist for Diebold, the former Georgia secretary of state Lewis Massey, then joined the lobbying firm of Bruce Bowers. The revolving door between the Georgia state government and the election venders was just beginning to spin."

Not only because of the good money already spent after bad, but because these morons some how have allowed themselves to wrap their pride up around this to the point they’d rather sue security researchers for exposing these obvious flaws than even begin to consider fixing them .

Plus, what will happen to all that extra money their election commission makes hosting “how to run an election” classes when they admit they haven’t ran a secure or honest one since 2002?

And we can’t even get our election systems to work properly.