Former U.S. Rep. Corrine Brown on Wednesday returned to federal court where she pleaded guilty to one count of tax fraud in her federal case, admitting that she lied to the IRS about deductions that were made.

So that pretty much wraps up this long running saga.

A Democrat tax cheat who probably voted to raise taxes.

The other 17 counts against her were dropped as part of a plea deal, and Brown won’t serve any further prison time.

n 2017, Brown was convicted of wire and tax fraud charges after prosecutors said she used a fake charity as a personal slush fund.
…and vs how much did she embezzle from her “slush fund”? Anybody know?

Check out the privilege on this dirtbag.

In July 2016, Brown and her chief of staff, Elias “Ronnie” Simmons, pleaded not guilty to a 22 count federal indictment in relation to a non-profit charity, One Door for Education Foundation. The indictment included charges of participating in a conspiracy to commit mail and wire fraud, multiple counts of mail and wire fraud, concealing material facts on required financial disclosure forms, theft of government property, obstruction of the Internal Revenue Service laws, and filing false tax returns.[37]

Federal prosecutors allege the charity was to give scholarships to underprivileged students, but instead acted as the personal slush fund for Brown and her associates. The indictment said that Brown and Simmons “filled the coffers of Brown and her associates” with One Door donations for their personal and professional benefit, totaling $800,000, much of which was deposited in cash to Brown’s personal bank accounts.[38][39]

On May 11, 2017, former congresswoman Brown was convicted on 18 of 22 corruption charges ranging from mail fraud to filing a false federal tax return.[40]

On December 4, 2017, she was sentenced to five years in prison and ordered to pay restitution. She reported on January 29, 2018 to Coleman Federal Correctional Complex in Sumter County, Florida, near Wildwood, to begin her sentence. She appealed her conviction, and collected her Congressional pension until her appeal concluded.[41]

Brown was released from prison on April 22, 2020 citing health concerns. Her attorney argued she was at increased risk of COVID-19 because of her age and underlying health conditions.[43] 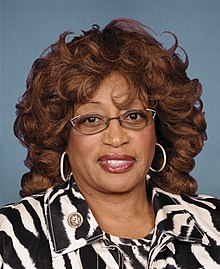 Check out the privilege on this dirtbag.

her personal and professional benefit, totaling $800,000,

She got released from prison (where she continued to collect her congressional pension) because it would be a tragedy if she caught the Kung Flu.

One law for them, another for you.

White privilege at its finest

While collecting a congressional pension! She got paid for it!

Her punishment stinks of elitist inside horse trading.

No different then the couple hundred polititions on both sides still out free and clear.