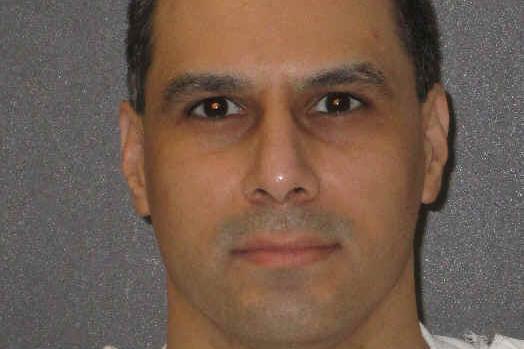 A federal judge on Tuesday granted a stay of execution to Texas death row inmate Ruben Gutierrez who was sentenced to die next week after being convicted in the 1998 murder of Escolastica Harrison.

The following quote from the linked Order of the Court summarizes the case.

This action arises under 42 U.S.C. § 1983 and Gutierrez challenges the constitutionality of Texas’ DNA testing statute. Dkt. No. 45 at 3; Tex. Crim. Proc. Code art. 64. Gutierrez claims the statute violates procedural due process because it denies a movant the ability to test evidence that would demonstrate he is innocent of the death penalty, and it is unequally and unfairly applied to someone who is convicted under the law of parties. He also claims its different outcome standard is overbroad. Dkt. No. 45 at 25-26. Gutierrez seeks a declaratory judgment holding Chapter 64 unconstitutional. Id. at 37.

Gutierrez also claims he will be executed under conditions that violate the First Amendment’s Free Exercise and Establishment Clauses and that substantially burden the exercise of his religious beliefs protected by the Religions Land Use and Institutionalized Persons Act (“RLUIPA”) of 2000, 42 U.S.C. § 2000cc et seq. Id. at 15.

Texas’s new rule banning all clergy from the execution chamber is being challenged here. That rule was adopted when the previous rule that favored Christian clergy was struck down in Federal Court last year. Texas’s hamfisted response to the previous court ruling is certain to be struck down.

Of course, a win on that doesn’t save Gutierrez’s life, as Texas would likely provide the requested clergy in order to carry out the execution.

His DNA claim could get him a new trial, hell it might even ultimately exonerate him if he is actually innocent.

The religious habeas claim is a no brainer and Gutierrez should and almost certainly will prevail on that issue.

As for the DNA claim, not familiar enough with Texas statute to make a yes or no on it, though I feel it at the very least is worthy of exploration by the habeas court.

20 years and counting is money going down a black hole. Why not commute to LWP & put among gen pop?

Sometimes I wonder if I’m wrong in anti death penalty stance. Had John Wayne Gacy been commuted, he would have preyed on other inmates, maybe murdered them.

Espionage, where countless lives are endangered? Really, in some instances, am not sure if there is a viable alternative.

But 20+ years on the row is money going down the pipes.