This is the same model that predicted the 2018 results. I know it’s way too early, but I like the map. Nebraska is purple? If this is right, Trump loses bigly. 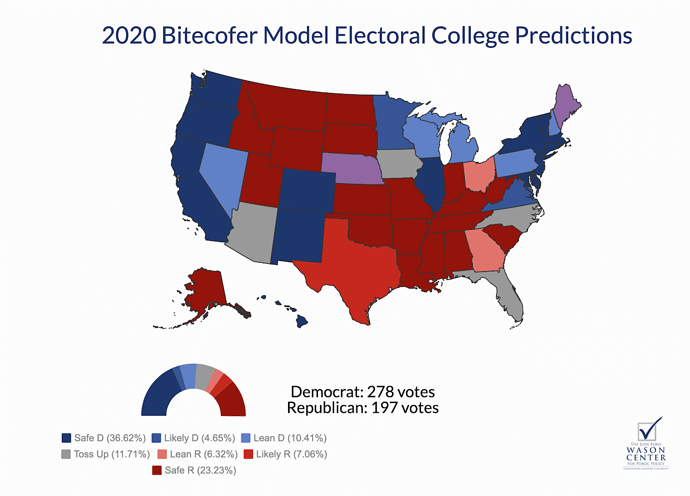 An election model that was surprisingly accurate in 2018 now predicts that a Democrat will win the presidency in 2020,…

After glancing at the link, one accurate prediction is not any kind of track record.

That suprised me too, but even without NE it’s a win. And they did get 2018 right. Not counting on it, but I like it.

No, but it’s possible they could be right again.

I think a lot of the midwest (I am thinking Nebraska stays red as red can get) and mid-atlantic will be indicative of who the D nominee is.

Florida has too many old people who like Trump.
Georgia and Texas will not turn purple for many years.
Again, it’ll come down to the swing states, OH, PA, WI, MI, VA, and NC.

He has a 75% chance of winning re-election, but I think the election will shake out like this.

And the people in those swing states that are unhappy with the jobs and tariffs.

What would be the likely impact if there was a war between the USA and Iran before the 2020 election?

Looks about right. I don’t see anywhere on that map I’d disagree with. It’s possible, IMO that AZ might go blue, but probably not this election.

The map seems about right.

This is the same model that predicted the 2018 results. I know it’s way too early, but I like the map. Nebraska is purple? If this is right, Trump loses bigly.

Dems get their hopes up and wind up crushed with disappointment on election night.

Kyrsten Sinema became the first Democrat to win a Senate seats from Arizona in 30 years. She won Arizona by 2.3%. I give Arizona has about a 50% chance of going blue in 2020.

Maine has a new voting system, so it may impact the presidential vote.

Wars usually favor the sitting president. But I would hope enough people would think it was probably Trump caused and vote against him.

There are globalists in both camps that hate independent statism and patriotism, and by extension, Trump