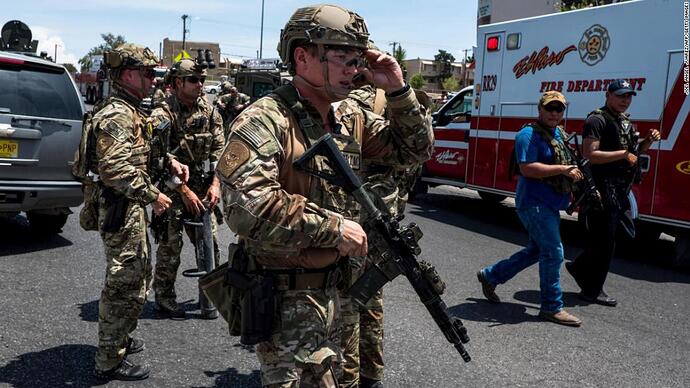 Twenty people were killed and more than two dozen were injured in a mass shooting at an El Paso shopping center on Saturday, according to Texas and local authorities.

20 minutes to shoot the place up according to tv news.

They need blood… please donate if you can

Looks like it started outside in the Walmart parking lot. CNN has video.

This is beginning to look like the work of a true and brave patriot! These aren’t people coming here, they are animals.

What the hell is wrong with you?

Nothing. These invaders may as well have told the guy they were going to kill him and his whole family.

The police spokesman said no law enforcement fired their weapons, he must have given up.

Thoughts and prayers… because that’s all they’ll get.

At what point do things change?

A Wal Mart in Texas?

This one wasn’t in a gun free zone.

Police said there were between 1,000 and 3,000 people in the Walmart when it started. “Max capacity” was the term used.

Seems so. One of the reporters ask the police spokesman if there were any Mexican nationals killed - he didn’t know.

Had a feeling this troll shooter thing was gonna become a trend.

The police haven’t said anything about 8channer. They did say he is from Allen, near Dallas. That’s about 650 miles away.

Back to school shoppers? They got schools in Texas right?

Back to school shoppers? They got schools in Texas right?

Yes, the back to school shopping was mentioned.

Yes, we have schools. Some of us can even read.