Donald is a most bigly destroyer

…of other nation’s economies. On CNBC, Donald boasted that because of his tough-guy approach to China in the trade war, their economy has lost “$15 to 20 trillion in value since the day I was elected.” China’s economy is worth an estimated $13 trillion in total. And since he was elected, their GDP has grown. 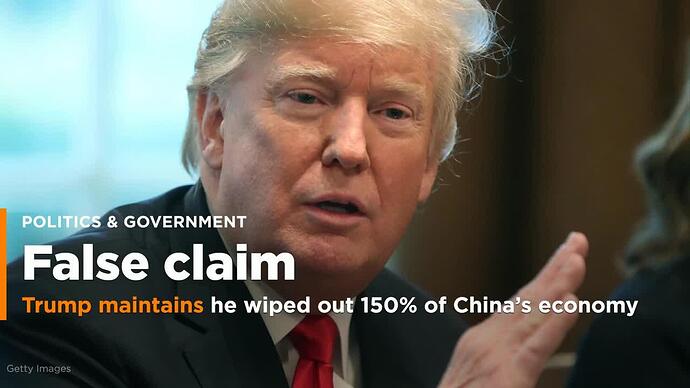 On CNBC, Trump says he wiped out 150% of China's economy

In an interview with CNBC Monday, President Trump said that because of his get-tough trade war with China, the Asian nation’s economy has lost "$15 to $20 trillion in value since the day I was elected.” In fact, the entire Chinese economy is worth an...

Joking?
Lying?
Desperately insecure need to pump himself up endlessly?
All of the above?

A post was merged into an existing topic: Trumps tariff lies. the latest edition