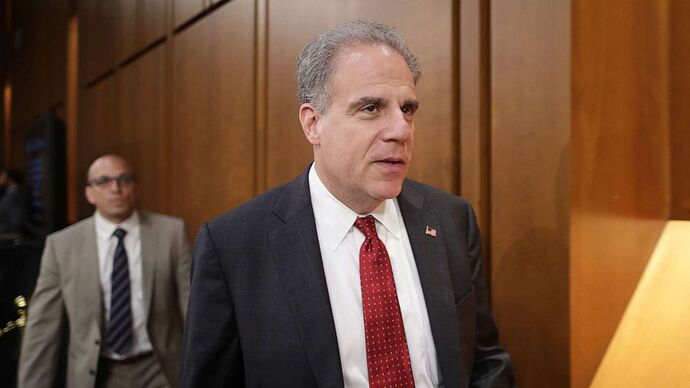 Department of Justice Inspector General Michael Horowitz releases the report examining the origins of the FBI probe into Russian interference in the 2016 election.

A major Department of Justice inspector general report released Monday has determined the FBI’s investigation into Russian interference in the 2016 U.S. election was launched with an authorized purpose, despite significant allegations of wrongdoing in how agents handled the counterintelligence probe of President Trump’s campaign.

”We did not find information in FBI or Department [Electronic Communications], emails, or other documents, or through witness testimony, indicating that any information other than the [Friendly Foreign Government] information was relied upon to predicated the opening of the [Russia] investigation," the inspector general’s summary said.

Inspector General Michael Horowitz’s office found the Russia investigation was launched in August of 2016 based on suspicions shared with the U.S. about former Trump campaign aide George Papadopoulos, and that the controversial ‘dossier’ authored by former British spy Christopher Steele was not relied upon in opening the investigation.

Horowitz found that DOJ had an authorized purpose in investigating whether there was a crime, and noted the “low threshold” for opening such an investigation. He also noted that while former FBI lawyer Peter Strzok was involved in the decision to open the investigation, the actual authorization came from his supervisor Bill Priestap, the former assistant director of the FBI’s counterintelligence division.

Horowitz said the office “did not find documentary or testimonial evidence that political bias or improper motivation influenced [Priestap’s] decision.”

However, Horowitz in his year and a half long investigation uncovered “serious performance failures” on the part of agents involved in the FISA applications for surveillance of former Trump campaign aide Carter Page, according to the report.

While Horowitz found no evidence of political bias or improper motivation for the FISA applications for Page, he documented what he described as serious errors and omissions that “made it appear that the information supporting probable cause was stronger than was actually the case.”

Horowitz said the errors “raised significant questions regarding the FBI chain of command’s management and supervision of the FISA process.”

In a statement reacting to the report’s release, Attorney General William Barr stated that he believed the evidence compiled by Horowitz showed that the FBI “launched an intrusive investigation of a U.S. presidential campaign on the thinnest of suspicions that, in my view, were insufficient to justify the steps taken.”

“It is also clear that, from its inception, the evidence produced by the investigation was consistently exculpatory,” Barr said. “Nevertheless, the investigation and surveillance was pushed forward for the duration of the campaign and deep into President Trump’s administration.”

Prior to its public release, the report was transmitted to Congress where lawmakers and aides reviewed it with staff from Horowitz’s office, sources familiar with the matter tell ABC News. Horowitz is set to testify on the report’s findings on Wednesday in front of the Senate Judiciary Committee.

And there goes that talking point right out the window.

Deepstate Never-Trumper Horowitz should be investigated for treason.

So the anonymous sources were correct then?

When do the arrests start?

This is the most delicious nothing berder I’ve ever tasted.

Nothingburger then, what a surprise. What next, trumpsters?

When do the arrests start?

And there goes that talking point right out the window.

How many do they have left?

John Solomon’s soon was delectable…you should check it out.

well since this thread will be merged anyways…
https://community.hannity.com/t/oig-fisa-report-day/223216?u=mobiusptc

here is the link to the report IG: No evidence the FBI planted any (CHS) confidential human source inside the Trump Campaign in 2016 https://t.co/9lydIhfTWL

and another talking points nerfed.

I think this is the part where Fred pulls off Horrowitz mask to reveal HILLARY CLINTON.

While Horowitz found no evidence of political bias or improper motivation for the FISA applications for Page, he documented what he described as serious errors and omissions that “made it appear that the information supporting probable cause was stronger than was actually the case.”

Huh. More than I thought there would be. And those “serious errors and omissions” were coincidental.

Does this mean that Comey is never going to get indicted???

What a surprise, fat donald lied when he stated that Obama was spying on him.

Does this mean that Comey is never going to get indicted???

John Durham is the new hope… Breaking: Dossier author Chris Steele had a meeting at Trump Tower, and maintains he was not biased against President Trump and in fact maintained a close friendship with a family member and was, if anything, “favourably disposed” to the Trumps. Extract from the OIG report here: https://t.co/afjxBkcTkd