And you enjoy your Friendsgiving.

Yep. Hoping for more in the coming year.

Nobody ever stated that barriers alone would solve the problem.

there was a speech involving Gorbachev, Reagan, and that exact wall…

Yes. The purpose of the proposed wall is to prevent freedom loving people from escaping to Guatemala. Good catch.

there was a speech involving Gorbachev, Reagan, and that exact wall…

Yes. The purpose of the proposed wall is to prevent freedom loving people from escaping to Guatemala. Good catch.

Not knowing what you are talking about seems to be a team sport around here lately.

In December 1979, a delegation from the American Security Council, lead by General John Singlaub reassured Guatemalan officials that overt military assistance would resume, should Reagan win the election. The message the team sent made clear that, “Mr. Reagan recognizes that a good deal of dirty work has to be done.”[46][47]

In April 1981, the Reagan national security team agreed to supply military aid to the Guatemalan army in order to exterminate the guerrillas and their “civilian support mechanisms”, i.e. “politicized people”.[48][49] That year, the Reagan administration approved a $2 million CIA covert action program for Guatemala.[50] Top Guatemalan military leaders were then put on the CIA payroll.[51]

In an investigative report, American newspaper columnist Jack Anderson revealed in August, 1981, at the height of the aid prohibition, that the United States was using Cuban exiles to train security forces in Guatemala; in this operation, Anderson wrote, the CIA had arranged for “secret training in the finer points of assassination.”[52]

In mid 1982, the administration deployed a U.S. adviser to teach Guatemalan military cadets “anything our Army has,” according to U.S. Green Beret Jesse Garcia, who was serving as the instructor at the time. This included training in “ambushes, surveillance, combat arms, artillery, armor, patrolling, demolition and helicopter assault tactics.” In summary, Garcia said, the United States provided expertise in “how to destroy towns.”[53]

In their assessment of U.S. aid to Guatemala in 1983, the editors of the Economist asserted that “What liberal Americans can reasonably expect is that a condition of military help to Guatemala should be an easing of the political persecution of the centre — which played into the hands of the extreme left in the first place.”[54] “The others evidently deserve their fate,” Noam Chomsky observed.[55]

In fiscal years 1981, 1982 and 1983, overt US military aid deliveries totaled $3.2 million, $4 million and $6.36 million respectively; a combined total of approximately $13.54 million (shipments included vital overhauls for previously acquired Bell UH-1 helicopters and A-37 counterinsurgency aircraft).[56] Under contracts licensed by the US Department of Commerce, twenty three Jet-Ranger helicopters, worth $25 million, were delivered to the Guatemalan armed forces between December 1980 and December 1982 (which shared interchangeable parts with previously acquired units and incoming military spare parts).[57] Other arms provisions made through the US Department of Commerce between 1981 and 1983 included laser aimed sights for automatic rifles, grenade launchers, two transport planes, and eight T-37 trainers. With the coordination of the CIA and the Pentagon, ten U.S. ex-Belgian M41 Walker Bulldog tanks, worth $36 million, were delivered to the Guatemalan Armed Forces via the Dominican Republic in late 1981.[58]

Human Rights Watch in 1984 criticized U.S. President Ronald Reagan for his December 1982 visit to Ríos Montt in Honduras, where Reagan dismissed reports of human rights abuses by prominent human rights organizations while insisting that Ríos Montt was receiving a “bum rap”. The organization reported that soon after, the Reagan administration announced that it was dropping a five-year prohibition on arms sales and moreover had “approved a sale of $6.36 million worth of military spare parts,” to Ríos Montt and his forces.[59]

United States intervention in the Guatemalan Civil War ran from 1962 to 1992. From the time of the CIA-orchestrated 1954 Guatemalan coup d'état onward through the duration of the civil war, the United States maintained close inter-military relations...

I recall. He brought democratic elections to Nicaragua.

Nobody ever stated that barriers alone would solve the problem.

You guys don’t talk about anything else.

That waste built to keep people in, not out.

That waste built to keep people in, not out.

So is Trump’s wall … it’s being built to keep people in Mexico.

This is a bit of a tangent, but will bring a smile to fans of border enforcement.

We hear that nothing is being done about VISA overstay. That is no longer true.

The Indians knew the university was fake because it did not require them to take classes — which is similar to many other colleges around the United States which provide OPT to foreign workers on “Day One” of enrollment.

“While ‘enrolled’ at the University, one hundred percent of the foreign citizen students never spent a single second in a classroom. If it were truly about obtaining an education, the University would not have been able to attract anyone, because it had no teachers, classes, or educational services,” said one of the sentencing memos written by the Department of Justice, according to the Detroit Free Press .

Many of the foreign graduates are hired for software jobs — but many others are using their national, caste, and ethnic networks to bargain for U.S. jobs in healthcare, accounting, management, engineering, and design. 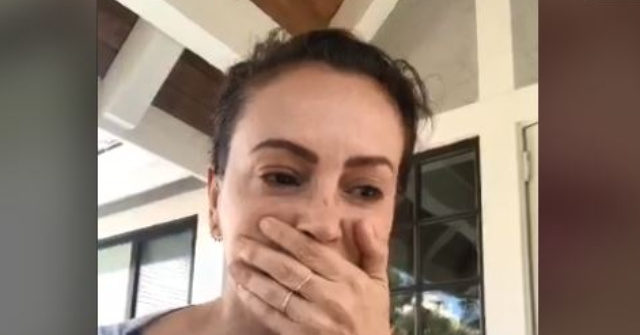 Hollywood actress Alyssa Milano is horrified by the deportation of 200 Indians who were caught trying to sneak into U.S. white-collar jobs.

I’ve been to Yuma several times. Ended up on a res with a tequila hangover once. Good times.

There’s a lot wrong with that article. And that guy they used for a “source”.

On a side note, I met one of the key players a few times years later. I worked with his grandson.

I’ve been to Yuma several times. Ended up on a res with a tequila hangover once. Good times.

Well that’s patently false on ti’s face and you know it.

Well, if Mexico ever builds one to keep them in, we’ll remember that.

If ethnic Spaniards were the Illegal Aliens they might. But they aren’t so they won’t.

But you’re not there anymore and crime has dropped 92%.

That was the 75% joke that fell completely flat apparently.