Did pocahontas try to ambush bernie?

After the debate, pocahontas asked bernie if he called her a liar. Bernie thought poco may have called him a liar. So, Bernie told poco that he did not want to get involved with back and forth accusations. What are your feelings on this childish infighting? I am puzzeled by it. 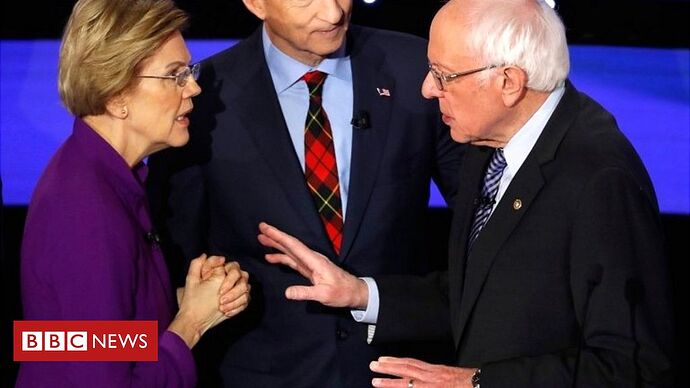 Warren accused Sanders of calling her a liar, recording shows

A recording of the heated post-debate exchange between the two US Democratic candidates has emerged.

Mics have recorded others humorous results.

Now back to the discussion. It appears to me that Ms Warren did not like the way Mr Sanders dismissed her original comments. She has a history of embellishing. I think she should have simply kept her mouth shut till the next debate. Maybe she should have come back with proof of what she claims he said. I would like to be fair.

Tell me about it. And I have a long commute. Leave in the dark, return in the dark. And when I fly across country on a red-eye I feel like ■■■■■

It could be worst you could be in AZ with temps in the 70s I was there recently.

It was her microphone … the wireless one clipped to her lapel for the debate. Of course she knew it was on, or at very least she should have. It’s not like it’s the first time she has seen one.

The incident is less than a storm in a tea cup.

In the overall scheme of things it’s just one confrontation between 2 senators. They’ll either resolve the issue and move on or stay miffed at one another. In the end, I suspect neither will be the nominee that the dems nominate - but that’s anyone’s guess at the moment

All I know is that the elitist dimocrats ran all of the minorities off the stage and out of the contest, and now they’re publicly telling women they can’t be president, while accusing a nasty woman of lying about it.

i dont think anything happens by accident with these extreme politicians.

i wouldnt be surprised if they planned this ahead of the debate, along with the shrill of a moderator

After the behavior in 2016 of the Republican candidates, there is hardly moral authority to criticize the dems.

I like how Bernie acknowledged the greeting from Steyer. A simple ■■■■ off would have been nicer

I found this to be a fascinating exchange on several levels.

Which one is lying? One of them is.

Likely truth is Bernie flippantly said a woman isn’t likely to win this cycle. Nothing like a Woman can never or should never be president as Warren appears to be trying to frame it.

Neither of them is qualified to keep the Trump economy moving forward.

Which one lied to a mother of color about her kids going to public school?

Which one used a lie to get ahead her whole life?

She speak with forked tongue.