Did Bush win in 2004 as a result of election fraud?

Democracy Now reported in 2005 about large amounts of apparent election fraud in 2004 election. The electoral college was decided by about 120,000 votes in Ohio and a GAO report found major problems with security of electronic voting systems.

There are three main problems the GAO found with the machines: First, some electronic voting systems did not encrypt cast ballots or system audit logs, and it was possible to alter both without being detected. Second, it was possible to alter the files that define how a ballot looks and works so that votes for one candidate could be recorded for a different candidate. Third, vendors installed uncertified versions of voting system software at the local level. 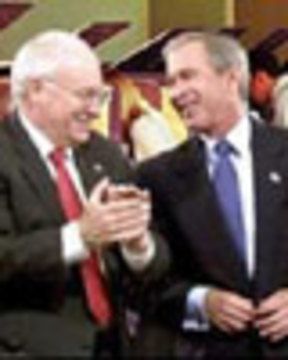 Was the 2004 Election Stolen?: A Debate on Ohio One Year After Bush’s Victory

A year later, questions remain over the outcome of the Ohio election and whether George W. Bush fairly won the state and the presidency. We explore some of these questions with a debate between Mark Crispin Miller and Mark Hertsgaard. [includes rush...

I was concerned when I heard these reports back in 2005. I voted for Bush, but I was appalled that the election machinery has such poor security that it would possible that alleged fraud on this scale was a reasonable possibility.

If there is any parallel between 2004 and 2020, it is that the surveillance state’s logical picks for president appear to have benefited from a large amount of election fraud. Is that a coincidence?

Now the true believers search for counterexamples to show they are “open-minded”.

So it is fine with you if Bush stole the election in 2004?

But John Kerry, one other quick thing about that — look, we wouldn’t even be having this conversation if Kerry had run a decent campaign in the first place. George W. Bush was the most vulnerable incumbent in American presidential history, and Kerry ran a very poor campaign. And it was only possible if they did — if Bush did steal this, it was only because the vote was close enough to let them do it

Man, republicans mocked the dems claims so much back then about it…

It was reported four years ago that no voting equipment was connected to the internet. And that was the reason that Russia or anyone else could not change the vote tabulation. However some state counties got hacked and voter information was uploaded. And after examination it was found that none of it was changed. And then again this year I heard multiple reports that DHS had confirmed that nationwide no voting systems were connected to the internet.

Bush went to war in Iraq based on faulty intelligence reports.

Eisenhower warned about the military-industrial complex. It looks like they may well have been rigging the elections in the US for quite a while. The difference this year is the scale of the fraud and the willingness of the president to expose a festering problem.

The difference, is that Bush and Obama were war administration, with massive long wars and Trump is about bringing troops home and making them stronger. I think we can guess who Bush voted for.

Was Bush even aware there was Fraud committed in his name? It was probably Dueling Fraud from both sides.

When I said it was funny to see our new election security experts rehashing the stuff I read on liberal blogs in the 00’s it wasn’t meant as research advice.

“since most voting equipment is now connected to the internet.”

Clearly, since counting still takes several days instead of mere seconds. Yep, this totally tracks and isn’t merely the spouting of random crackpots who don’t know how elections work.

Why are we looking backwards here? That election was decided by the SCOTUS.

No, it was reported four years ago that there was no evidence that the Russians moved votes. That is not the same as saying that it was impossible for it happen.

Electronic voting machines receive periodic updates. The updates can come directly though an internet connection or through a thumb drive from another computer that is connected to the internet.

Back in 2018 a New York Times video showed how this is done:

In the video, the software in each voting machine moved a fraction of incoming votes from one candidate to another. Interestingly the video ends with President Trump explaining that paper ballots are important to assure security.