This just seems like the reaction of a snowflake to me. I understand he has been criticized on Twitter, but he’s a Congress member. He needs a thicker skin.
Here’s a link to the actual complaint. He filed for $250M, but I think what he really wants is an injunction against the three people that have been hounding him. The twitter names add a bit of humor to the story. 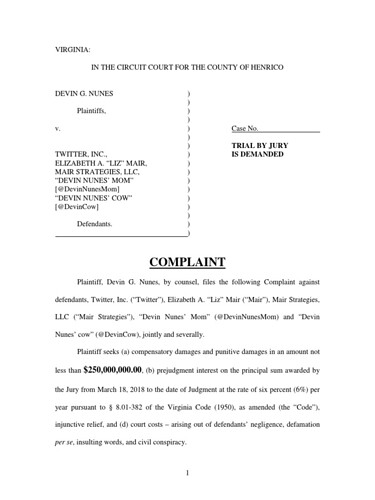 From the actual complaint:

I remember a time when republicans were against frivolous lawsuits… Good luck Nunes!!

It doesn’t surprise me that trump’s lap dog (one of many) need to lash out because their feelings got hurt.

Lots of people get harassed on FB and Twitter. There is an option, and it’s called, “BLOCK.”

The trump wing of the GOP has proven to be the biggest snowflakes of them all. Hell just a few days ago trump asked if the FCC should investigate SNL and late night hosts for making fun of him all the time

There is some really funny content in here that Nunes included in his complaint.
The “Devin Nunes Mom” poster said that “he turned out worse than Jacob Wohl”

The complaint is hilarious.

I think it’s telling that Nunes’ attorney doesn’t have a website, and has a “earthlink” email address.

OMG. I’m on page 16, the list of “falsely stated” tweets has me laughing so hard.

I love that his attorney has an earthlink address too.

I liked this early in the report:

Twitter, by its actions, intended to generate and proliferate the false and defamatory statements about Plaintiff in order to influence the outcome of the 2018 Congressional election…

Isn’t this one of the guys who insisted that Russian interference didn’t effect the 2016 election? I wonder what changed?

Yes, he is one of those guys.

I think there is a good argument for jurisdiction of this case in CA where Nunes resides. CA has pretty strict ANTI-SLAPP laws. I think Devin could easily end up paying the defendants legal fees in this case.

Some of the charges in the complaint don’t appear to be falsifiable, such as:

falsely accused Nunes of being a “lying piece of ■■■■

This is too damn funny. 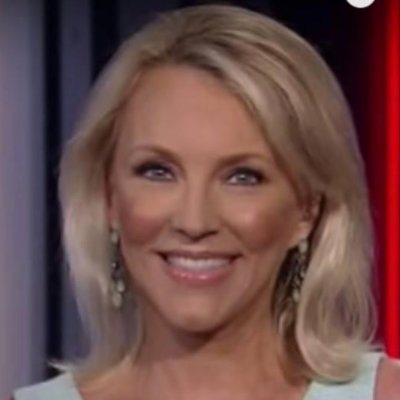 Twitter is having a lot of fun with this.

I am laughing so hard! This is great comedy. Snowflake indeed. All the president’s men are crybabies.

I tried posting some of the funnier parts of the complaint, but it must have gotten flagged. Funny, it can be written and submitted to the court but it’s too offensive to be posted here.