When is Enough, Enough!!!? California, is becoming a Virus, a Plague, and a drain upon the rest of America.

We don’t need Zombies in America, when we have Politicians from California that are willing to let infections go wild, and seem to enjoy having people defecate in public whenever and wherever they please. The homeless population is soaring in Cali, and for some reason the Democrat Politicians don’t seem to care enough to fix the problem.

Why haven’t these Extremely Life Threatening Health issues already been taken care of by Liberal Democrat Politicians in the state of California?

Is this a Democrat Politicians definition of what a Socialist Utopia needs to be, in the rest of America?

‘THIS IS MEDIEVAL’: LA Experiencing a ‘Complete Breakdown of the Basic Needs of Civilization’ Hannity.com News

Originally published at: https://hannity.com/media-room/california-nightmare-san-franciscos-homeless-living-in-trees-across-the-bay-area/ California’s escalating homeless crisis took a turn for the worse this week, with local reporters finding San Francisco’s transient population living in makeshift tree houses across the Bay Area. “The occupants of five to six ramshackle tree houses built in a private industrial park near Stevenson Boulevard and I-880 in Fremont are facing eviction,” rep… 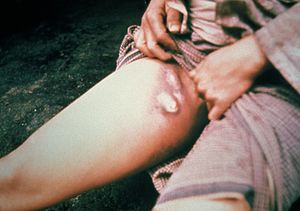 Bubonic plague is one of three types of plague caused by the plague bacterium (Yersinia pestis). One to seven days after exposure to the bacteria, flu-like symptoms develop. These symptoms include fever, headaches, and vomiting, as well as swollen and painful lymph nodes occur in the area closest to where the bacteria entered the skin. Occasionally, the swollen lymph nodes, known as "buboes" pictured to the right, may break open. The three types of plague are the result of the route of infec...

Salmonella enterica subsp. enterica is a subspecies of Salmonella enterica, the rod-shaped, flagellated, aerobic, Gram-negative bacterium. Many of the pathogenic serovars of the S. enterica species are in this subspecies, including that responsible for typhoid. S. enterica subsp. enterica contains a large number of serovars which can infect a broad range of vertebrate hosts. The individual members range from being highly host-adapted (only able to infect a narrow range of species) to displayin...

States all too happy to take the tax money California puts into the system.

oh yeah? Don’t those Conservative states have major problems with homeless people, and a drug epidemic, and people defecating on the streets, probably in front of children at times?

States all too happy to take the tax money California puts into the system.

I’m sure that America would be more than happy to not take California’s “tax money”. California and most corrupt Liberal states in America, cause a lot more problems, then help America.

NO, it’s not. You’ve been fooled again by leftist media. You have to take into count the cost of living. As I’ve told people over and over…

California dems could not even build a train… Something Americans could do in the early 1800’s at record pace. Meanwhile the hwy 99 and most of the roads used by farmers crumble…

NO, it’s not. You’ve been fooled again by leftist media. You have to take into count the cost of living. As I’ve told people over and over…

The cost of living, gas prices, and several other things that cost a lot more in
California, than in most other states. You’re correct!

Remember when in grade school we were all taught how only backwards people threw their poop on the streets because it causes disease to spread? I guess the leaders of Dem cities missed that lesson…

Remember when in grade school we were all taught how only backwards people threw their poop on the streets because it causes disease to spread? I guess the leaders of Dem cities missed that lesson…

Wait…So you’re saying that America becoming a 3rd World country like Venezuela is a bad thing?

Do Democrat Politicians know this? lol. Dumb Dem Dem Politicians want us to eat out of garbage trucks, I guess.

Which Conservative States are worst?

San Francisco is my hometown so I am interested in the homeless problem there. I have read many articles and ideas about the homeless issue. First of all, it is not a partizan political issue. Democrats, Republicans and Independents have all been working together at the local and state levels to find a answer. Unfortunately it is not problem that you can fix by throwing money at it. And you can’t just ban them. And the numbers have swollen so much in the last few years that social services is having a real problem. And it isn’t for lack of money, it’s because they lack trained workers. Instead of the OP placing blame, I would like to hear his ideas on solving the problem. Thoughts?

Rush was just telling about LA negotiating with the skid row homeless and they got more land and 600K in legal bills were paid. If you read between the lines you see the only one making money are the lawyers. Sounds like a scheme among dem connected lawyers to make each other rich. They could care less about homelessness.

That’s not even a real question, more like which are better?

You have to take capitalism into account when discussing problems caused by alleged socialism? Fascinating

What really sad is how much better the illegal are treated than our homeless. I see 50 and 60 year homeless old women walking our streets everywhere. So sad!

Everybody knows that it is a Liberal corrupt state, that is ran by Democrat Politicians.

Maybe Democrat Politicians can own up to something they do wrong?!!!
I doubt it though. Taking responsibility for their actions, isn’t something that Democrat
Politicians do in general.

the only time they own up to something is if they actually do something right for once!

The first thing I would do, is get more Conservatives elected in the state, where they had the majority in the state. That way, once the Republicans take the majority over, they can get the credit for turning the state around. Of course the Democrat Politicians would never let that happen.

You have to take capitalism into account when discussing problems caused by alleged socialism? Fascinating

I don’t know what that means?

The cost of living i.e. housing prices are being driven by market capitalism.