“Under Trump, “we ended catch and release. He was building the wall. We were making sure that people who want to claim amnesty did so from outside the United States,” Hagedorn said in a El Paso, Texas, news conference Monday flanked by other congressional members. "But what happened is that Joe Biden came in and unraveled all those policies. These open border and amnesty policies — I call it America Last."

Indeed, while the children of American citizens are having various classes cut to pay for the education of children of illegal entrants, and taxpayer financed public housing meant for needy American citizens is being filled with those flooding across our border, and America’s Vets are sleeping in the streets while the Biden Administration is housing those crossing our border in expensive hotels, and America’s health care system meant for American citizens is being overwhelmed with the current massive influx of Central America’s poverty stricken population, the Biden Administration continues with policies which put America’s needy citizens last.

As pointed out in the article, Rep. Hagedorn notes, “… it would cost $1.3 billion to educate the 60,000 minors held in one facility, and that doesn’t count the millions of illegal aliens already in the country whose education is being paid for by taxpayers.”

The article also points out 2-million “migrants” are expected to stream across the U.S.-Mexico border by the end of the year and “. . . up to 1.1 million single adults are expected through September, along with up to about 828,000 families and more than 200,000 unaccompanied children.”

It is absolutely stunning that Vice President Kamala Harris who is black, and who has been put in charge of immigration, still has avoided a visit to our southern border to witness the ongoing invasion which is mostly, and adversely, affecting our nation’s inner cities where this swarm of migrants usually winds up.

As one patriotic American has observed, the Democrat Party Leadership doesn’t “…really care about the well-being of Americans! Naw, that can’t be right, can it?

After all, they only waste our tax dollars, let jobs leave overseas, destroy our inner cities, and let killers and rapists roam the streets.”

What’s unique to this thread vs your other anti-immigration threads?

Your innuendo, “anti-immigration threads”, is not appreciated and is insulting.

Just to be accurate, immigration policies which do not advance the general welfare of the United States and her citizens, and are noted as such, cannot honestly be referred to being “anti-immigration”.

The truth is, a recent poll shows most Americans are unhappy with Biden’s handling of immigration. CLICK HERE FOR ARTICLE

“We’re seeing child trafficking. We’re seeing that the cartel and the smugglers are making billions. This is the same organization that is terrorizing Mexico. This does not benefit anyone,” she said.

Flores believes many south Texas Republican and Democrat voters are furious about it."

I doubt most American citizens are “anti-immigration”. In fact, I believe they simply want immigration policies enforced which advance the general welfare of the United States and her citizens, and this is exactly what I support.

Biden is pretty much putting America Last in everything. 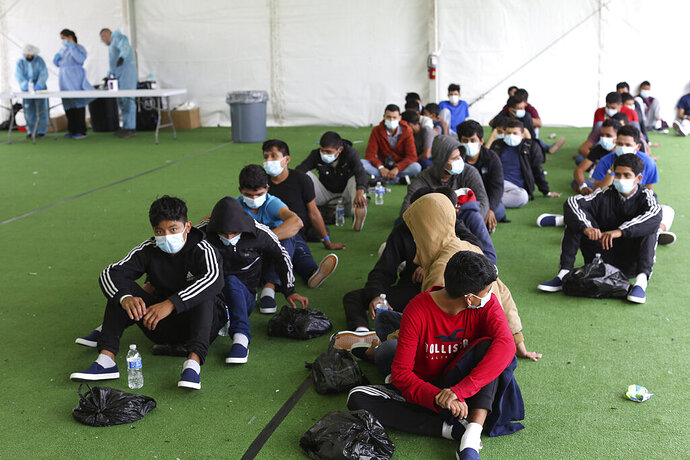 A Texas hospital that has been treating migrant children for a range of concerns after their trek across the Southern border has not gotten any reimbursement from the Biden administration for their more than $200,000 in health care costs, the...

Biden is pretty much putting America Last in everything.

Seems that way. Even sex offenders are put ahead of the safety of American citizens.

“Amid a report that illegal alien sex offenders were freed into the United States, five states are suing the Biden administration over guidelines that are used to shield rapists and other violent felons from deportation.

A San Antonio television station revealed last week that U.S. Marshals released illegal alien sex offenders in Austin and Del Rio, preventing Immigration and Customs Enforcement (ICE) agents from taking them into custody. The Marshals Service said it does not comment on cases “subject of ongoing or pending litigation.”

How on earth is the Biden Administration’s immigration policies advancing the general welfare of the United States and HER citizens?

If I were the Governor of Texas, I would get that money by redirecting the federal tax on gasoline to my state’s treasury until the hospital costs were satisfied.

In a recent three page letter to President Biden and Vice President Harris, 20 governors detail the devastation caused by the current border crises and ask the President to immediately deal with this crisis.

Twenty governors, including Governor Doug Ducey, have called on the White House to end the border crisis.

According to Governor Ducey’s office Tuesday, the group of governors sent a letter to President Joe Biden and Vice President Kamala Harris asking them “to reverse their destructive policies that have created the crisis at the southern border.”

What motivates the Democrat Leadership to abandon and neglect those who voted for them?

What I can’t understand with regard to the ongoing invasion of our southern border, there are significant consequences being inflicted upon American citizens, especially citizens living in our nation’s inner cities who are most adversely affected by the swarm of poverty stricken, poorly educated, low skilled, diseased, disabled and criminal populations of Central America being allowed to flood across our border by the Biden Administration.

As an example, the children of American citizens attending public schools are having activities cut to pay for the special needs of the children of foreigners flooding across our border LINK And, public housing, meant for our nation’s needy citizens, is now being filled with Central America’s poverty stricken population, leaving America’s needy citizens and their children homeless. LINK

What is the motivation of the Democrat Party Leadership to turn their backs on American citizens, especially our nation’s needy citizens, who most likely, in general, voted to put a Democrat Leadership in power?

Of course, and considering the fact our mainstream media is in bed with the Democrat Party Leadership, and avoids reporting on the devastating effects of the ongoing invasion of our southern border, it could very well be those who voted for a Democrat Leadership are simply unaware of how the current Administration is screwing American citizens and their children with its reckless, unpatriotic, immigration policies.

The irrefutable truth is, because of the Executive Orders Trump put in place, the flow of Central America’s poverty stricken across our southern border was reduced to a trickle. But as soon as Biden took over he reversed Trump’s Executive Orders dealing with immigration, which immediately resulted in that trickle turning into a tsunami, and American Citizens and their children are now paying the price.

One of Trump’s Executive Orders was ending “catch and release”, an Obama policy which allowed immigrants who entered the US illegally to be released from detention into our population, while awaiting a court hearing on their status.

But as soon as Biden took office he re-started “catch and release”. See Biden reinstates ‘catch and release’ policy at the southern border. And now we find news articles like the following: Mark Morgan: 30K Migrants Released Into US Since January

“Some 30,000 migrants who crossed the southern border and were taken into federal custody have been released into the United States since January as facilities to house them have been filled to overcapacity . . .”

“In an interview on CBS News’ “Face The Nation” Sunday, Rep. Henry Cuellar, D-Texas, said he learned of at least 2,000 illegal immigrants in southern Texas who were released by Border Patrol agents without having been given notice to appear in an ICE court, calling it an “unprecedented” number.”

With news like this ___ the restarting of catch and release and ending court appearances ___ allowing Central America’s poverty stricken direct entry into our nation’s population, it’s no wonder we now have a massive tsunami across our border and American citizens paying the price.

How on earth are Biden’s immigration policies promoting the general welfare of the United States and her citizens?

The United States shall guarantee to every State in this Union a Republican Form of Government, and shall protect each of them against Invasion
.

When American citizens vote like Israelis, the Dutch, hell, even the French, or Swedes and South Koreans, maybe they’ll be taken seriously.

Until then, who cares if ADM and Purdue increases their margins with an abusable labor pool, right? That’s business. Kamala Harris gets defensive during Lester Holt grilling about the border

’ Harris says, " I’m in Guatemala because my focus is dealing with the root causes of migration. There may be some who do not think that is important. But it is my firm belief that if we care about what is happening at the border, we better care about the root causes and address them. So that’s what I’m doing,” said Ms Harris. ’

The root cause of immigration into the US is that the US is one of the least racially discriminatory nations on earth, one of the most prosperous nations on earth, and a nation in which anyone willing to work and aspire has a good chance of succeeding. I can see that President Harris is working hard to remove these incentives that attract people to immigrate into the US.

Encouraging people to illegally enter the US without repercussions, providing social benefits and promising citizenship (with Democrat voting rights). While writing checks worth billions of dollars to countries having corrupt ties to criminal cartels?
Yes, the taxpayers are fine with that.
UNITY!
lol
Suckers.

She topped that one with a fake reporter making fake news fluff.

When American citizens vote like Israelis, the Dutch, hell, even the French, or Swedes and South Koreans, maybe they’ll be taken seriously.

Until then, who cares if ADM and Purdue increases their margins with an abusable labor pool, right? That’s business. 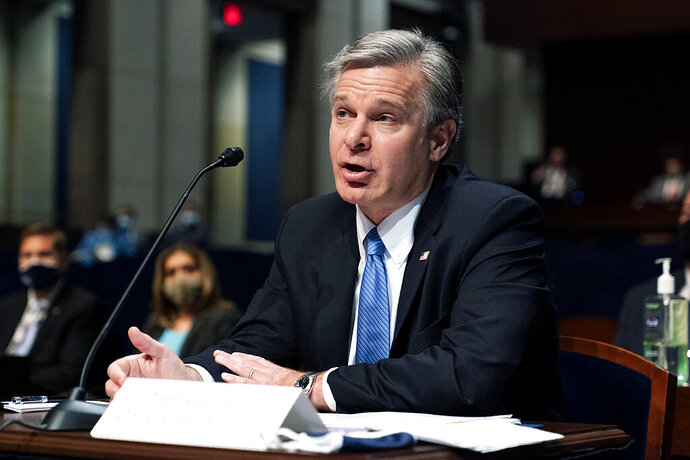 FBI director confirms Mexico cartel activity 'spilling over' into US amid...

FBI Director Christopher Wray on Thursday said there is "no question" that cartel activity from Mexico is "spilling over" into the U.S. – as the country faces a historic crisis at the southern border triggered by a massive surge in migration.

Or, we could just not take that money from those Americans in the first place…this way, they could spend it for themselves.

Or, we could just not take that money from those Americans in the first place…this way, they could spend it for themselves.

Well, that’s a whole other can of worms. You want a big military budget? That ain’t free.