It’s me again. Your favorite schmenge.

I don’t want to belabor your angst here, but a reminder that something you told Bernie and Sid and their radio audience is, well, not so.

You told them “that anytime I’ve interviewed somebody that my wife has professionally worked for I let people know.” You also said, “Sean Hannity can do what he wants to do, but I’m surprised Fox isn’t making him, at a minimum, disclose a conflict every time he talks about this.”

When they challenged you with my information from my column you replied to me: “That person who wrote that did no research.”

"You and so many others in the media have decided to make relationships and guilt by association the cause of the day..."

Shocking as it may be to you Chuck, I most certainly did do my research. Here, Chuck, is the link to your show of February 12, 2017, as thoughtfully transcribed by NBC News - your employer. I have also watched the video of this.

The interview in question is with former Virginia Senator Jim Webb, whom your wife served as communications director in his Senate race as well as advising in his short-lived presidential run. It begins as follows:

“Is Flynn's job already in danger? And hostile takeovers, angry posters jam Republican town halls. Have Democratic voters found their voice after the election? I'll talk to a leading progressive, Senator Bernie Sanders and a former senator, Jim Webb of Virginia, a Democrat who says the Trump victory may have been necessary for the political system. Joining me for insight and analysis are Katty Kay, anchor of the BBC’s World News America, Washington Post columnist, Eugene Robinson, Greta Van Susteren, host of MSNBC’s For the Record, and former North Carolina governor, Pat McCrory. Welcome to Sunday. It's Meet the Press.”

As you can see, there is no reference to Webb’s tie with your wife or of the tie between Bernie Sanders and your wife’s consulting firm. After interviewing Trump advisor Stephen Miller, you bring on Senator Sanders, saying:

The Sanders interview proceeds with no reference that he had anything at all to do with your wife’s consulting business. After bringing on your panel for a chat, they leave and you get to former Senator Webb. And that interview begins:

“Welcome back, my next guest is part of a rare and dying breed, a centrist and a moderate. A moderate Democrat. Jim Webb was secretary of the navy under Republican President Ronald Reagan. He voted for George W. Bush over Al Gore. But by 2006 he had switched parties to become a Democrat and he won a U.S. Senate seat in Virginia. Jim Webb takes a somewhat more optimistic view of the potential for a Trump presidency. And he joins me now, Senator Webb, welcome back to the show.”

After talking about Webb’s views and his plans, you end the interview by saying:

Are you done with politics?

I'm over here with you right now.

All right. I will leave it there. Senator Jim Webb apparently coming back to the journalism world. We’d welcome you back--

For sure. Anyway, thanks for coming on. Coming up, voting with your wallet……

The panel comes back, more panel chat. Then you end the show this way:

“Thank you all. That's all we have for today. We'll be back next week. I hope you took my advice on the Wizards. I told you. See? They're paying off. It's a good bandwagon to jump on. If it's Sunday it's Meet the Press.”

Maybe you intended to do it, Chuck. Maybe you just forgot, although as we all know anchors of TV shows have teleprompters with pre-written scripts right in front of them, not to mention usually notes in their hand or on the desk in front of them. But whatever happened that day, Chuck, you most assuredly - as both tape and transcript show clearly - never once mentioned your wife’s association with former Senator Webb or that of her firm with Senator Sanders.

Look. We all make mistakes. But going on Bernie and Sid’s show and quite specifically saying you did something when it is crystal clear in both video and transcript that you did not - then saying I didn’t do my research when quite clearly I did- is compounding a mistake with an untruth. Unless, of course, you yourself did not do your research and you never bothered to look at the tape of the February 12th show or read the transcript and just assumed something that in fact did not happen.

You have said my column was an effort to “get” you. Not so.

Before I wrote a single word you and your wife’s situation were mentioned by….Rush Limbaugh. On his April 17th, show Rush made a considerable point of focusing on what he (and I and so many conservatives) feel is exactly an example of the liberal media bias and double standards that have been going on for decades. A bias and double standard that was so bad that it virtually begged for the corrective that is Fox News and talk radio, not to mention in today’s world all those conservative sites on the Internet.

In this case, the double standard revolved around the blatantly false accusations against Sean Hannity for a conflict of interest. But that being the accusation, Rush took it and ran. He went through a long list of media figures - by name - and specifically highlighted conflicts of interest. Of you - after mentioning you earlier - he said:

And, as mentioned, he named a slew of others - it wasn’t just Chuck Todd - asking why all of them never talk about their conflicts every time they discuss or interview someone with whom there is such a blatant conflict in one fashion or another. Which is exactly what you suggested - but for Sean and Fox, not for you and NBC.

Mark Levin was blunt in talking about this, citing this piece about The Sean Hannity Standard by Breitbart’s John Nolte. Said Mark: “This is a big lie what’s taking place here, a big lie. And if this is the standard now, as Nolte points out over there at Breitbart, if this is the standard now, the ‘Sean Hannity Standard,’ then let’s apply it to every d–n one of these people – every d–n one of them.”

Chuck, you are not the problem here. You are merely a symbol of the problem. The moment Sean Hannity’s name was disclosed in the Michael Cohen case - and since he had in fact said on his radio shows from time to time that he was a friend of Michael Cohen’s the fact of a connection should have come as no shock - you and your many liberal media colleagues went gunning for Sean and for Fox News. The latest attack is about Sean’s private real estate dealings. This says everything one needs to know about the state of the press in America today.

Why? Why these attacks on Sean? Because Sean is a certifiable star in the conservative media of long standing, and in the present day well identified as a friend and supporter of President Trump. And not to put too fine a point on it, but it is Sean Hannity who has been looking into -with multiples of serious investigative reporters like Sara Carter - the real and massive scandal behind the phony “Trump-Russia” collusion story. It is very safe to say that without all of Sean’s dogged efforts to put on air many of the people who have appeared on his two shows to report the results of their thorough, persistent and far-reaching

investigations these kinds of attacks on Sean would never have happened. Now they are after his private real estate deals? Really, Chuck? Really?

The moment I realized all of the commotions about Sean and his friendship with Michael Cohen I had one instantaneous reaction: these multiples of attacks on Sean would boomerang on his accusers - and big time.

And sure enough, very quickly more people than Rush Limbaugh and Mark Levin were making the same point. Yes, Chuck, I used you as a poster boy for this because you chose to put yourself out there on the issue. But it took a conservative media nano-second for others to jump on this on their own and mention a lengthening list of liberal media figures who were pushed forward with specifics as to their conflicts of interest. Journalists from CNN, MSNBC, CNBC, ABC, CBS and The New York Times were all mentioned, their conflicts laid out there as I did with you.

Chuck, I worked in Washington a long time. If “conflict of interest” is the game, Washington, D.C. is the name. Washington is the most conflicted town in America, bar none. And journalists are at the top or near the top of the conflict-of-interest totem pole.

A few years back you were kind enough to invite me on Meet the Press. I couldn’t do it. But suffice to say I have no animus against you. I understand why you think this attention paid to you and your wife is personal - but I assure you on this end nothing could be further from the truth.

As mentioned, you are not the problem here. You are merely a symbol of the problem. The problem comes when so-called “objective” journalists really are not. When those who masquerade as being neutral and objective are in fact liberals or one-time Democratic Party activists. Note well that column from the newly fired conservative Kevin Williamson fired after leaving National Review from a mere two days at The Atlantic. When Kevin brought up the sharp, sometimes offensive writings of the late Christopher Hitchens in the pages of The Atlantic, editor Jeffrey Goldberg replied: “Yes. But Hitchens was in the family. You are not.” 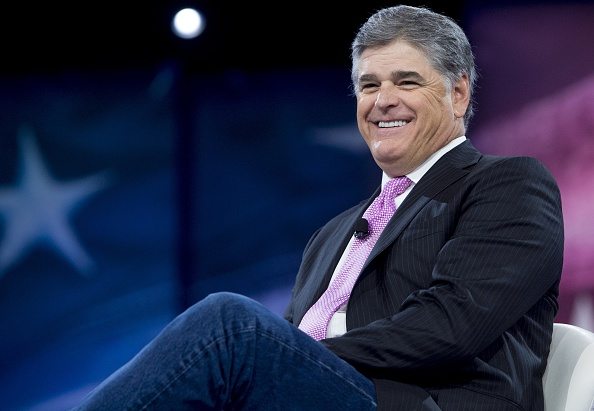 Well said. Sean Hannity is not in the liberal family. And so the effort to Get Hannity is the current - not to mention seemingly eternal - obsession of the liberal media. This time, I genuinely think my liberal friends have overstepped - and now this has turned back on them. You, in this case.

To close? You have also said, “What I take offense to on that is that’s my wife, that’s not me.” And, “I think it’s a ridiculous place that we’re in a society that it’s guilt by association.”

You are not your wife. Sean Hannity is not Michael Cohen. But you and so many others in the media have decided to make relationships and guilt by association the cause of the day. Now, clearly, you are both surprised and angry that people on my side are agreeing with you on the problem.

I agree with you, Chuck. It is, in fact, a ridiculous place that we’re in a society that it’s guilt by association. Perhaps all of this will lead a lot of media people to agree with you and stop doing it. Call me skeptical, but by all means, lead the way!

Thanks for your time.

The views and opinions expressed in this article do not necessarily reflect the official position of Sean Hannity or Hannity.com