Today was the annual Daughters of Vote event in Ottawa in which the house of commons is replaced by 338 young woman (one from each riding) and they grilled the party leaders on a range of issues.

Prime Minister Justin Trudeau faced some tough questions in the House of Commons today — not from opposition MPs but from young women participating in a special event promoting political leadership.

Dozens of the 338 delegates, representing every riding in Canada, turned their backs on Trudeau as he delivered his opening remarks — just hours after he expelled two women from his Liberal caucus. 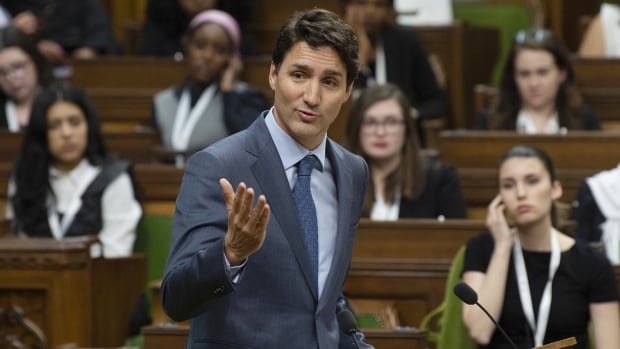 Prime Minister Justin Trudeau faced some tough questions in the House of Commons today — not from opposition MPs but from young women participating in a special event promoting political leadership.

In the first video, a young Canadian girl stood up weeping and spoke of a trauma that is being pushed by the Canadian government that is driving kids to commit suicide! What is it she is referring to?

Representatives of the Daughters of the Vote deliver messages of hope in the House of Commons. 6:09

Nunavut has a major issue suicide mostly among young Canadian 15-25, She wasn’t blaming the government themselves for those death but Trudeau after his election promised reform and investment in wellness and mental health centers to the territory. That help is yet to materialize and the people feel abandon.

people in Nunavut have a hard life (Its more remote then Alaska) they live in small very remote town with little to no resources to deal with medical, mental health, law enforcement issues,. picture a small town (1,000) which that has 12 attempt suicide in a year.

there is little resources for law enforcement so abuse is widespread and there are only a few shelters in the whole territory (It 2x larger then Texas) so the nearest shelter might be 5 - 6 hours away and they might have no beds.

the neglect Canada show toward its Territories is disgusting.

‘Nunavut is in a crisis’: Territory appeals for help as suicide attempts,...

Last week, the community of Pangnirtung on the southeast coast of Baffin Island sent a letter to the territorial government that pleaded for extra resources to deal with suicide attempts and growing violence.

Damn…that’s terrible. I had no idea. It makes me wonder, why stay?

Family is the main reason a lot of them stay they don’t want to abandon their cousins, brothers, sisters, aunts, mothers, fathers, etc family is a very important thing in their culture.

out of all three territories Nunavut has it the worst the population is so spread out and it lack any real infrastructure connecting it to the rest of Canada.

out of all three territories Nunavut has it the worst the population is so spread out and it lack any real infrastructure connecting it to the rest of Canada.

There is much of Canada where you reach the end of the road…and from here on…you’re on your own. It’s one of the many things about Canada I enjoy.

It pains me when I witness people in pain. I wish there was something I could do to stop it.

majority of Canada is untapped wilderness, we are such a small population is most of it is very localized (Southern Ontario, Southern Quebec). about 90% of the population lives within 300 miles of the U.S border.

the way the indigenous service department is run in Canada is a joke we have communities who have been under boiled water advisers for 30 years… but a lot of these communities are so remote its a logistic nightmare.