Combetta and Pagliano both lied in official FBI interviews

The IG report and the agents 302’s clearly state that both of hillarys IT contractors , combetta and pagliano flagrantly lied multiple times during their official FBI interviews. The decision to grant immunity to these liars and then to use their post lie testimonies to establish facts must be exposed to sunlight. This is a matter that must be looked at by fresh , unbiased eyes. If Chris Wray refuses to reopen these negoatiations , he must be fired.

The IG report and the agents 302’s clearly state that both of hillarys IT contractors , combetta and pagliano flagrantly lied multiple times during their official FBI interviews. The decision to grant immunity to these liars and then to use their post lie testimonies to establish facts must be exposed to sunlight. This is a matter that must be looked at by fresh , unbiased eyes. If Chris Wray refuses to reopen these negoatiations , he must be fired.

Where do you propose to find those eyes?

If Chris Wray refuses to reopen these negoatiations , he must be fired. 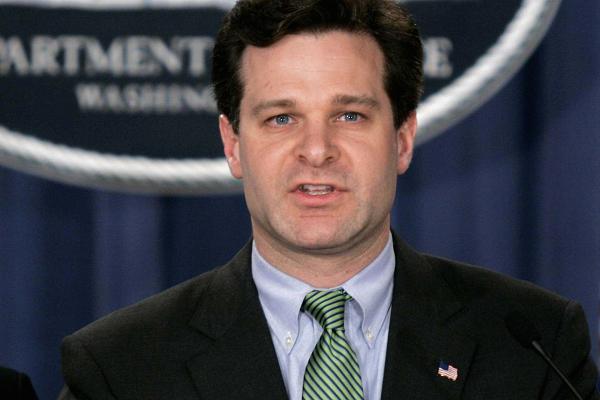 President Trump tweeted he will be nominating Christopher Wray as the new director of the FBI. He is a man of "impeccable credential," tweets Trump.

This is a matter that must be looked at by fresh , unbiased eyes. If Chris Wray refuses to reopen these negoatiations , he must be fired.

Are you really trying to assert that Wray who was appointed by Trump has a pro-Clinton bias?

You guys are hilarious. You want to just keep investigating investigations until you get the result you want - but it never pans out. (Benghazzziiii) You concurrently whine about the Mueller witch hunt and don’t even realize how silly it all looks.

I read through the IG report on both of these guys starting on page 99.

Pagliano did not lie in his interview.

Combretta did lie in his initial interview but they thought they’d have a hard time proving it. At that point, they could either go to subpoena him in front of the grand jury, at which point he’d take the 5th, or immunize him so that they could get to the truth. The target wasn’t Combretta, it was Clinton and Mills. Combretta didn’t lie on his immunized testimony.

Mills? Cheryl Mills? Was a target?

Prosecutor 4:
I was concerned that we would end up with obstruction cases against some poor schmuck on the down, that, that had a crappy attorney who didn’t really, you know, if I was his attorney, he wouldn’t have gone in and been, you know, hiding the ball in the first place. And so at the end of the day, I was like, look, let’s immunize him. We’ve got to get from Point A to Point B. Point B is to make a prosecution decision about Hillary Clinton and her senior staff well before the election if possible. And this guy with his dumb attorney doing some half-assed obstruction did not interest me. So I was totally in favor of giving him immunity

The Cheryl Miller who sat in Clinton’s “interview”?

A lot can change in 3 months of an investigation.

Wouldn’t you agree? Combretta, even with immunity, did not tell them Mills ordered anything to be destroyed in violation of a subpoena.

He should have been charged with lying to the FBI. Why was he lying to them? Was there something to cover up?

He should have been charged with defying the order to
maintain the records too, which seems like it was the reason he lied.

But perjury and destruction of documents were both going to be hard to prove in a court.

Cohen hasn’t been charged with anything.

Manafort has dozens of charges.

Flynn has far more charges than lying to the FBI.

Unlike Flynn who could easily have been proven to have lied.

Which is the more egregious crime, lobbying without a license or destroying evidence?

Just like them. Dozens of charges of lying to the FBI. The Martha Stewart crime. What a crock. It shouldn’t even be a crime.

Clinton got treated with kid gloves.

No. Not at all like then. You need to come back after doing some homework.

Treating Clinton with kid gloves is giving immunity to her underling in the hope he’d turn on her. Sure.

Did they send a SWAT Team to kick her door in and seize her server?

Did the let any of the others have another “target” (your word) in the room with them.

If lying to the FBI wasn’t a crime, Mueller’s investigation wouldn’t have lasted 20 minutes.

How many people were offered immunity before they were interrogated not in the Clinton camp?

How many of the collusion “conspirators” were allowed in the room when another was being interrogated?

None. Have a nice day.

He further told the FBI that Mills had contacted him on
or about March 8, 2015, to assess what was still on the servers, including whether
there were any “old back up data or copies of mailboxes hanging out there on old
equipment.” However, he stated that he did not tell Mills that he subsequently
realized the archived emails were still on the PRN server or that he deleted them in
late March. In addition, he stated that he “could not recall the content” of the
March 25, 2015, call with Kendall and Mills. In sum, Combetta took responsibility
for the deletions, without implicating Clinton or her attorneys.
WOW pg.107

When facing an easy conviction on multiple felony counts , I would guess Combetta starts remembering his phone calls.

This gem from pg.132
Combetta posted on Reddit on or about July
24, 2014, “I may be facing a very interesting situation where I need to strip out a VIP’s (VERY VIP) email address from a bunch of archived email…
???Why didnt they bother to ask who ordered it or when???

The FBI version of “like , with a cloth” pg.133
Agent 2 explained that the team “felt pretty strongly that maybe he
had deleted information off of Secretary Clinton’s server,” but that interpreting
computer forensics and precisely what they mean can be “kind of messy.”