The Chinese government is seeking to wean farmers off imports of soybeans from the United States, which have already been hit by tariffs.

Well, looks like some American farmers are gonna need some more taxpayer money. It’ll probably come from a bunch of liberal states.

Honestly, if they voted for Trump, they deserve the lost business. I grew up on a farm so I know how terrible the odds are of making money each year, but for god sakes, he literally TOLD them all what he planned to do. Hopefully soybean farmers aren’t too shocked on their way to bankruptcy. 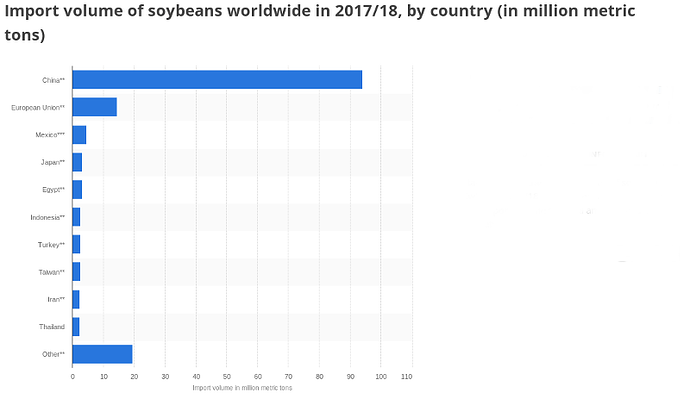 Appears to be quite a market lost. Does the US like now sell it’s soybeans for reduced cost to other nations to export to China at a mark up?

The far-right candidate about to be elected in Brasil has pledged to remove all sorts of environmental protections and land restrictions in the Amazon as part of a nationalist move, maybe they can up their soybean production.

no worries, argentina is going to buy all those soybeans now…

Well, looks like some American farmers are gonna need some more taxpayer money. It’ll probably come from a bunch of liberal states.

What the heck do you care about American farmers? You just explained in another thread how bad it is to be a nationalist. Maybe it will be good for some other soybean farmers somewhere else.

What does do farmers have to do with Nationalism?

What does do farmers have to do with Nationalism?

look like he seemed to be worried about a massive sector of American farm industry collapsing due to a trade war with China.

look like he seemed to be worried about a massive sector of American farm industry collapsing due to a trade war with China.

Yep. And he was just decrying nationalism as an evil.
Yet he only cares about the American farm industry.

You seem not to understand what Nationalism is.

While I don’t think Doug is the least bit sincere in this show of concern for other countries farmers, I am 100% on his side on this one.

Our farmers have long been the most pampered in the world, so screw them. All the crying about NAFTA in this country but our farmers made out like bandits and didn’t seem to shed any tears for other industries hit or for Mexican farmers they destroyed.

But if you ask Griselda Mendoza, the deal nearly destroyed her family and her community of corn farmers in the southern Mexican state of Oaxaca.

“Before NAFTA, everybody here grew corn. People didn’t make much money, but nobody went hungry,” says Mendoza, 23, sharing common lore from her region. She was born just after NAFTA was signed.

As cheap American corn came pouring in from the border, it had a devastating effect on her family. Her father, Benancio Mendoza, couldn’t compete and make a living wage selling corn. He had to give up and move to the United States looking for a job. He took up a job as a cook in Tennessee, saving up money to send home so his kids could attend school.

“He went north looking for a job and I didn’t see him again for 18 years,” says Mendoza, who now works as a secretary for the local government.

The sooner the American farmers go bankrupt,laying waste to rural America, the sooner all their children will move to the cities and become Democrats. This has really been the plan all along and the suckers had no idea.

Trump is the only president willing to stand up to China. That’s why we need to keep the house. Dems have no solutions. For anything… Schools , housing or jobs

You seem not to understand what Nationalism is.