The government has locked down the country, and taken over media outlet to crackdown on large scale protest in the country. 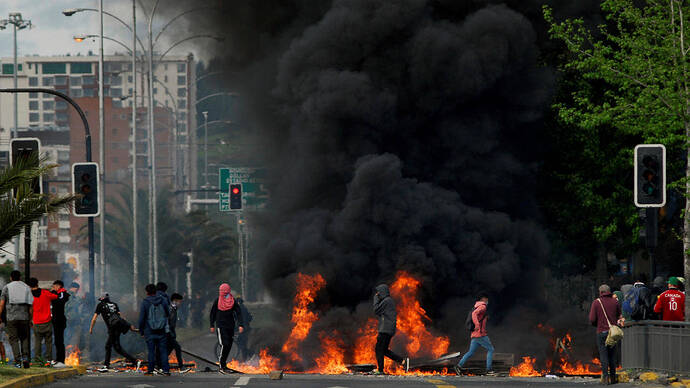 Chilean state of emergency extended around country after deadly riots

Chile´s government will extend a state of emergency to cities in its north and south after at least seven people died amid violent clashes and arson attacks over the weekend, the interior minister sa…

Andres Chadwick said in a press conference in the capital Santiago the decision to extend the emergency measure came amid an “escalation of violence and vandalism,” two weeks after protests led by students began over fare hikes on public transport.

He cited 70 incidents of “serious incidents of violence” on Sunday, including 40 lootings of supermarkets and other businesses, and said military and police numbers were at 10,500 in Santiago and would be reinforced where necessary.

“We are facing a real escalation that is undoubtedly organised to cause serious damage to our country and the lives of each of its citizens," he said.

Santiago and other Chilean cities have been engulfed by several days of riots as protests over an increase in public transport costs prompted President Sebastian Pinera to reverse the move and declare a state of emergency.

I saw some footage of the “protestors”…emptying a WalMart of it’s inventory.

This should be getting more widely reported.

Started over a socialist fare hike on the subway which was then flooded with protesters.

Good example of how inept government is.

President Sebastián Piñera, facing the worst crisis of his second term as head of the South American country, announced Saturday night that he was cancelling a subway fare hike imposed two weeks ago. The fare boost had led to major protests that included rioting that caused millions of dollars in damage to burned buses and vandalized subway stops, office buildings and stores.

After meeting with the heads of the legislature and judicial system Sunday, Piñera said they discussed solutions to the current crisis and that he aims “to reduce excessive inequalities, inequities abuses, that persist in our society.”

Jaime Quintana, president of the Senate, said that “the political world must take responsibility for how we have come to this situation.” 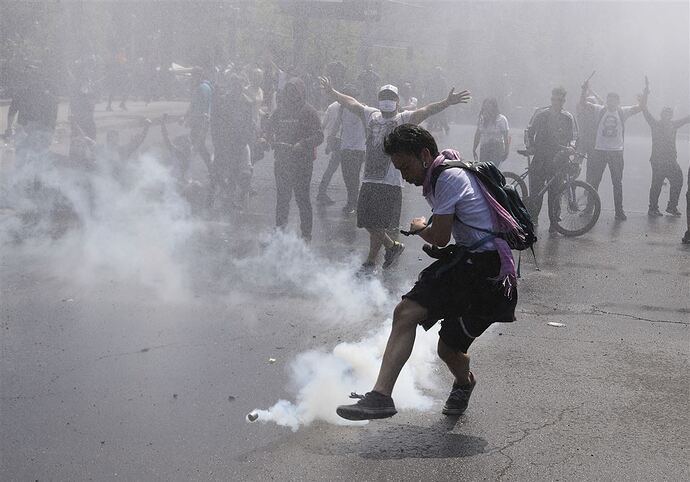 Protesters continue to demonstrate in Chile despite their president’s retreat...

The world is watching how we react to similar protests in our own hemisphere. 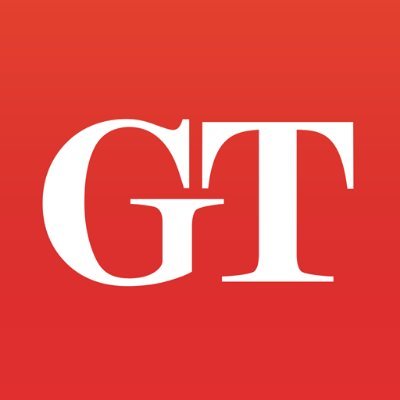 The subway line 4 was burned today during protests against an increase in metro fares in Santiago, Chile. The West is paying the price for its support of "HK democracy" as #HK exports "revolution" techniques back to Europe and Latin America. https://t.co/wqt5lM5ckr

The world is watching how we react to similar protests in our own hemisphere.

I feel that it’s important to put this viewpoint out there, just to check our own language where it mirrors Chinese propaganda on HK.

We might want to educate people on the recent history of Chile including their election of a Marxist leader in 1970 and the collapse in 1973.

Reminds me of Bernie Sanders only much more charming.

The military dictatorship of Chile (Spanish: dictadura militar de Chile ) was an authoritarian military regime that ruled Chile for seventeen years, between September 11, 1973 and March 11, 1990. The dictatorship was established after the democratically-elected socialist government of Salvador Allende was overthrown in a coup d’état on 11 September 1973. During this time, the country was ruled by a military junta headed by General Augusto Pinochet. The military used the alleged breakdown of democracy and the economic crisis that took place during Allende’s presidency to justify its seizure of power. The dictatorship presented its mission as a “national reconstruction.” The coup was the result of multiple forces, including pressure from conservative and women’s groups, certain political parties, union strikes and other domestic unrest, as well as international factors. According to an article written by lifelong CIA operative Jack Devine, although it was widely reported that the CIA was directly involved in orchestrating and carrying out the coup, subsequently released sources suggest a much reduced role of the US government.[1]

The regime was characterized by the systematic suppression of political parties and the persecution of dissidents to an extent unprecedented in the history of Chile. Overall, the regime left over 3,000 dead or missing, tortured tens of thousands of prisoners,[2] and drove an estimated 200,000 Chileans into exile.[3] The dictatorship’s effects on Chilean political and economic life continue to be felt. Two years after its ascension radical neoliberal economic reforms were implemented, in sharp contrast to Allende’s leftist policies, advised by a team of free-market economists educated in US universities known as the Chicago Boys. Later, in 1980, the regime replaced the Chilean Constitution of 1925 with a new constitution. This established a series of provisions that would eventually lead to the 1988 Chilean national plebiscite on October 5 of that year.

In that referendum, the Chilean people denied Pinochet a new mandate, opening the way for the reestablishment of democracy in 1990. Consequently, democratic presidential elections were held the following year. The military dictatorship ended in 1990 with the election of Christian-Democrat candidate Patricio Aylwin. However, the military remained out of civilian control for several years after the junta itself had lost power.[4]

Hopefully China is watching this too.

I feel that it’s important to put this viewpoint out there, just to check our own language where it mirrors Chinese propaganda on HK.

My bad. I misunderstood your intent.

The dictatorship was established after the democratically-elected socialist government of Salvador Allende was overthrown in a coup d’état on 11 September 1973.

So people shouldn’t support Bernie Sanders because there might be a military coup? I don’t get what your point is with this post.

Bernie is an avowed socialist which is a half step from communist.

Trending toward the wrong end zone to put it mildly.

Imagine if the single payer goes through and MRI’s have to be rationed since the backlog is so long.

Would people react any differently than a fair hike?

No one riots when the Chicago Subway hikes fares.

When do we have mass protests?

We have protests all the time. That is very different from a military coup in Chile in 1973.

List of protests in the United States by size

The right to assemble is recognized as a human right and protected in the First Amendment of the US Constitution under the clause, "Congress shall make no law respecting an establishment of religion, or prohibiting the free exercise thereof; or abridging the freedom of speech, or of the press; or the right of the people peaceably to assemble, and to petition the Government for a redress of grievances." Widespread mass protest became a distinct characteristic of 20th and 21st century American ...

Any response that begins with…So you are saying…

Usually isn’t going to come across as engaging and meritorious.

I am just saying that socialism is bad as per Chile.

That’s all. Sad to see the inevitable strife play out in HK, Venezuela, Spain, and now Chile. In Chile over a trigger as seemingly benign as a subway fair hike.

Socialism pits its citizens against its government.

Capitalism pits each person against their own self interest.

Socialism pits its citizens against its government.

Capitalism pits each person against their own self interest.

The first asks you to “settle”, while the second motivates you to “reach”.

I think the poster understands now.

Sometimes simple can be eloquent.

I think the poster understands now.

Sometimes simple can be eloquent.

I don’t know? There are some pretty hard heads around here.