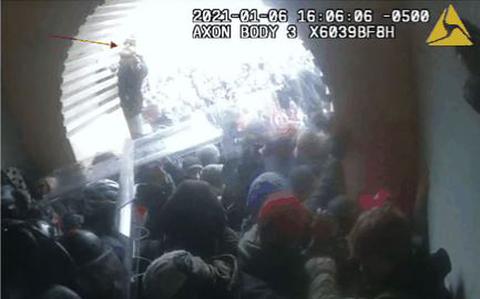 Former Fort Bragg soldier receives one of the harshest sentences tied to...

A former Fort Bragg soldier, who reenlisted in the Army after attacking police with chemical spray during the riot at the U.S. Capitol, will now serve the longest prison sentence handed down so far against a defendant tied to the massive insurrection...

James Mault of Fayetteville, North Carolina and a co-defendant were sentenced to 44 months in prison and 3 years of supervised release for participating in the insurrection and for attacking police with chemical weapons.

Given the attacks on the police, clearly a fair and suitable sentence and a welcome change from some of the very weak sentencing I have seen going on.

3 years and 8 months in Federal prison is very much a fair and just sentence.

Not sure what the Army is going to do with him. He fraudulently reenlisted, without informing the military of the pending criminal charges. Not sure if they will simply separate him with a general discharge under other than honorable conditions or if they will seek a punitive discharge for the crime of fraudulent enlistment.

He reenlisted before he was charged, according to your link.

He reenlisted before he was charged, according to your link.

He knew he was under investigation, which he would have been required to report to the Army. So it still constitutes fraudulent enlisted.

I think the Army will do the easier and quieter thing and grant him an administrative discharge.

If that’s the harshest, the others don’t have much to worry about. lol

I do find it odd that Antifa used Bear spray on the police during their violent struggles against cops. I wondered if any of them were arrested, convicted and sentence to 44 months.

That’s (D)ifferent and you know it. America almost fell to Bison Boy’s rule.