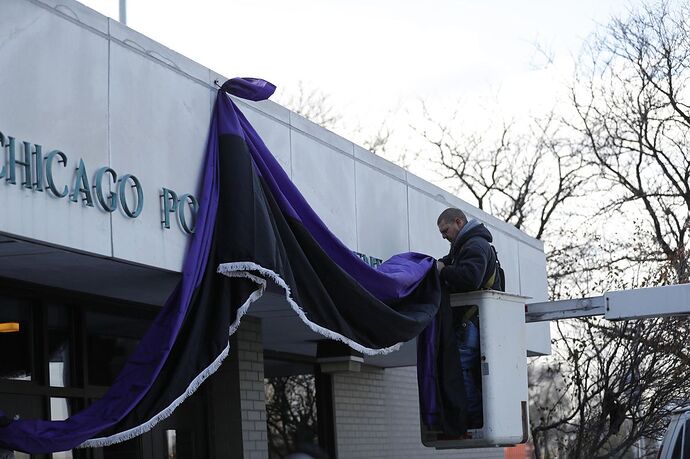 A Chicago police officer was killed and three other people are dead, including the gunman, after a shooting at a South Side hospital.

He was walking with a woman. Shot and killed her and then just started randomly shooting (at police, hospital employees, etc). Hospital was on lock down. The shooter is dead.

Shot and killed her

It doesn’t say she’s dead and that doesn’t match your headline.

A second officer was also shot at, but the bullet struck his holster and embedded itself in his gun. The officer was not injured.

Lucky! He needs to buy a ticket.

One of the articles said the gunmen had a concealed carry permit. Does Chicago issue those?

Watching live coverage on WGN in Chicago. Long several mile long procession to Cook County Medical Examiner office. Hundreds if not thousands of officers from Chicago and the Suburbs. Very sad and somber. Another officer dies running toward danger trying to save strangers from mayhem and violence. God bless Officer Jimenez and his family.

Watching Chicago’s finest choking back tears as they listen to the mayor talk about these deaths. Courageous men and women!

Nearly 60 percent of guns recovered in Chicago come from out-of-state dealers, with more than 20 percent traced back to Indiana, according to a newly released report on the city’s violence.

The 2017 Gun Trace Report released Sunday also showed that nearly a quarter of the guns recovered in Chicago were sold by just ten federally licensed firearms dealers (seven in Illinois and three in northwest Indiana).

We need those dealers to be able to sell way more guns to single buyers at a time. Any current regulations or laws preventing them from doing so should be done away with immediately.

Where’s the NRA? Shouldn’t they be busy telling those doctors trying to save the lives of their dying colleagues, Dr. O’Neal and Dr. Less, as well as Officer Jimenez, to “stay in their lane”?

Maybe. That’s how it works. We are all law abiding. Until we commit a crime. Even you.

“Sources say…” is what I found.

lol - Hey, you know something about him that I don’t I’ll happily stand corrected.

Maybe. That’s how it works. We are all law abiding. Until we commit a crime. Even you.

What a wonderful world it will be when everyone is a law abiding gun owner. Shootings will never happen again.